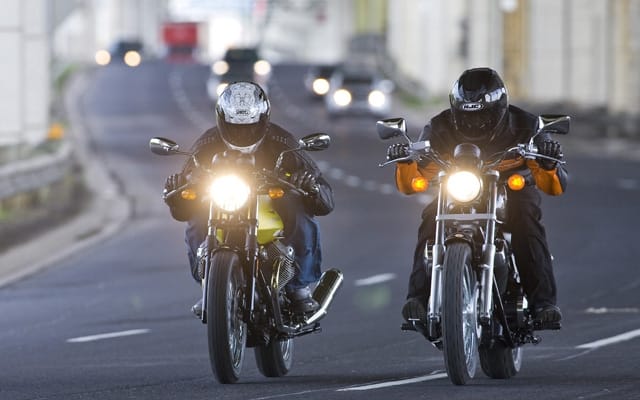 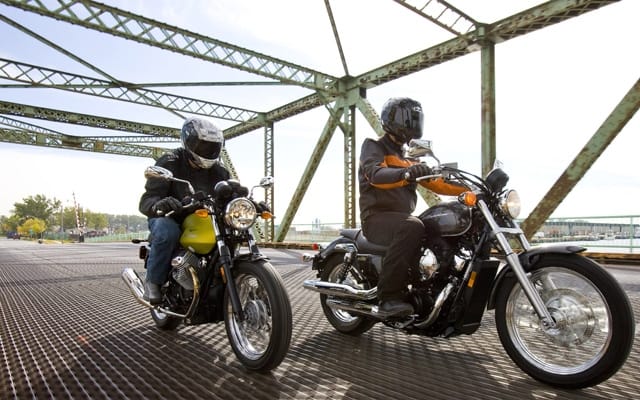 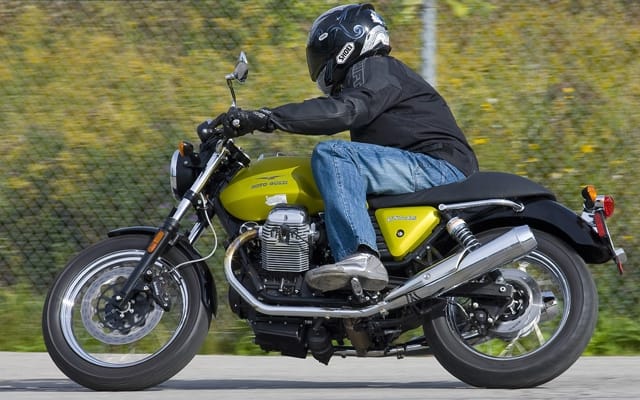 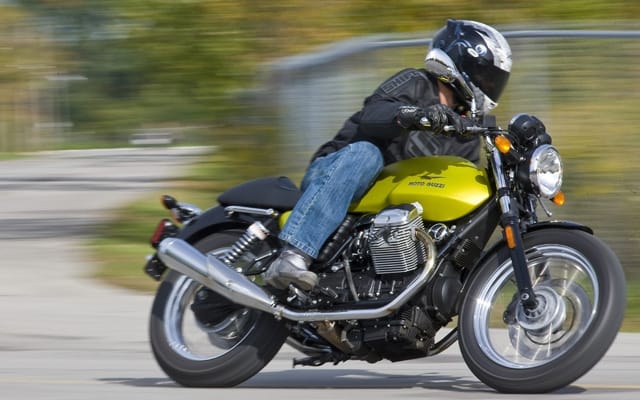 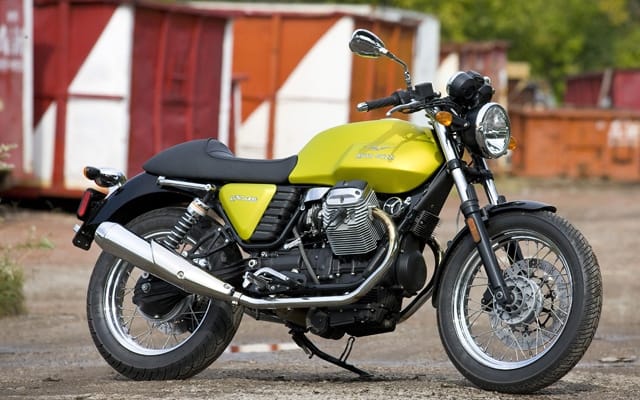 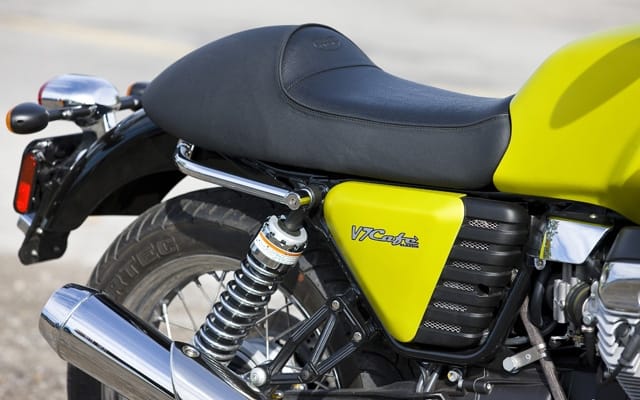 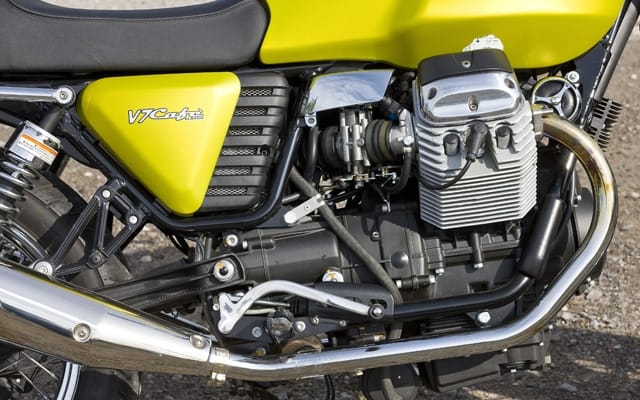 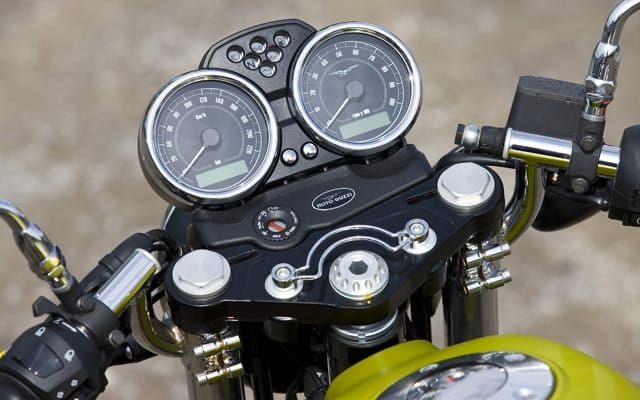 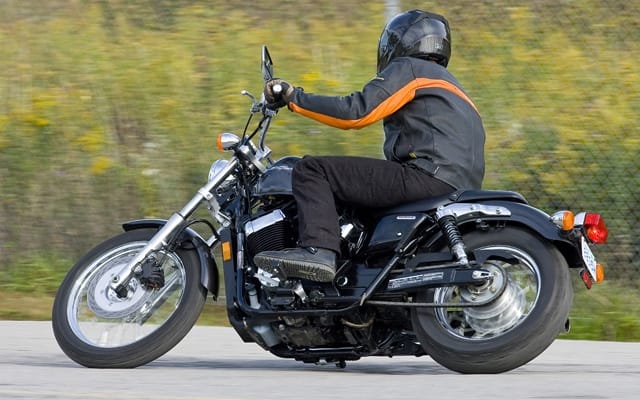 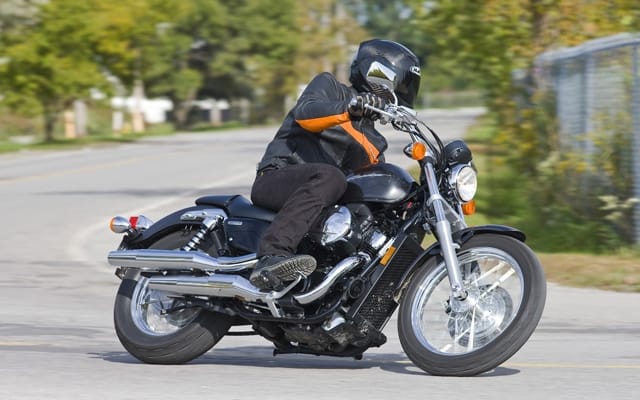 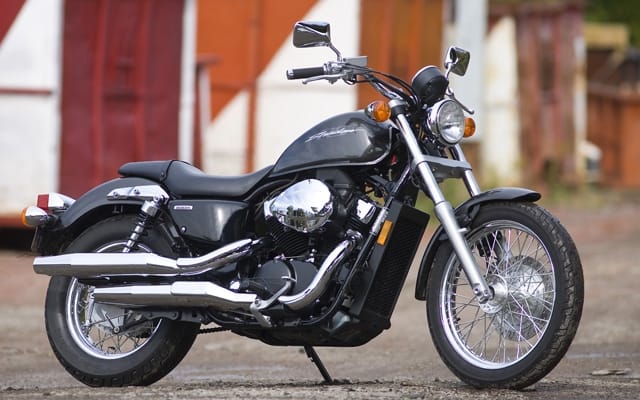 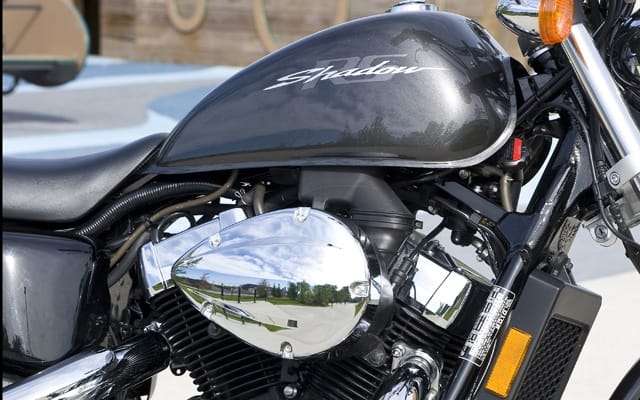 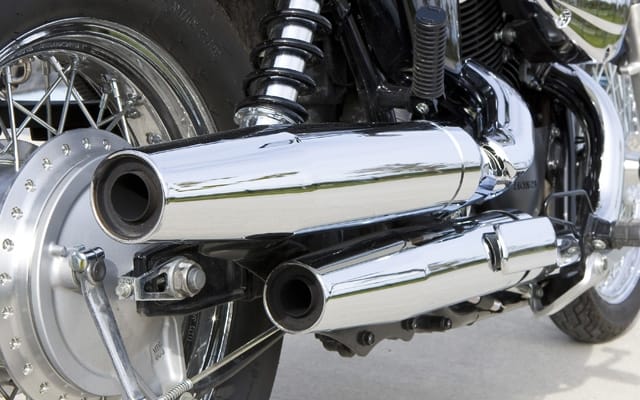 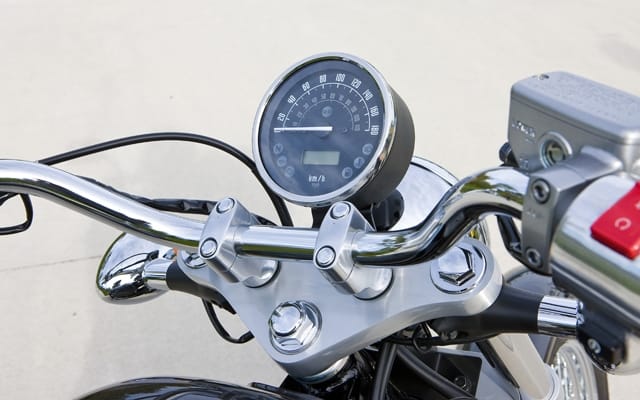 One is an Italian take on a British icon while the other is a Japanese fake of an American icon. Confused? So are we.

The Honda Shadow RS and the Moto Guzzi V7 Café Classic are two very different motorcycles: one is a replica Sportster, and the other is a replica café racer. You might even call it — the Guzzi, that is — a replica British café racer, because it was British lads on British bikes who defined the style.

So it’s America vs. England in this match of two 750s that appear to lust after iconic status. In other words, they’re fakes. They’re not even American and British — though that would be seen by many as a redeeming factor.

It is striking how seriously the Honda Shadow RS takes its stage role: from an angle off the side, with the front wheel cocked and the bike leaning into its stand with that James Dean take-me-or-leave-me attitude, it’s practically asking for a light (for the cigarette, that is). It’s a handsome motorcycle. Every detail is proportional to every other, and the performance is proportional to a Sportster. Gone missing, in other words. But in 1957, when this style was born, the Sportster was the king of performance, so it’s not that the bike isn’t fast, it’s just that there’s fast in 2011, and there was fast in 1957. This bike is 1957-fast.

But it’s also smooth, comfortable, and quiet. It feels like a small motorcycle when you sit down on it, and with the wind in your face shield and your hands on the grips, it looks almost as if there’s no motorcycle under you. Years ago, there was a television show called “Then Came Bronson,” about a drifter on a Sportster. He once effected a repair with a rock – that’s how genuine it was; you really can fix a Sportster by hitting it with a rock, you know – and the actor, Michael Parks, did come from the James Dean school of acting, constantly mumbling and looking down at his shoes. The Honda RS plays in this style: fading and quiet. It seems doubtful that you could repair any of the Honda’s components by hitting it with a rock, though.

The Guzzi, on the other hand, does not disappear beneath you; in fact, it grows. Its engine burbles and snorts, its clip-on style handlebar puts the rider into a forward lean, its pegs are relatively high; everything about it makes a statement. Where the Honda slips into the background, the Guzzi shouts its own name, repeatedly, like some mad, over-the-hill rock star.

The Café Classic recreates the look of a Moto Guzzi V7 Sport, a model that was released in the early 1970s, though the modern bike’s single-rider seat and up-swept mufflers differ from the older bike’s features, and the performance of the new bike is not as stirring as the 1970s model’s.

Moto Guzzi is most authentic looking of modern retro bikes. Paired tach and speedo will forever remain classic. Honda’s RS channels Sportster with eerie accuracy, even down to the details like the centrally mounted speedometer.

That particular Moto Guzzi broke records for speed (the early-’70s V7 Sport is claimed to have been the first mass-produced motorcycle to exceed 200 km/h). The V7 Café Classic, on the other hand, is not about to break any performance records.

The Guzzi is not over the hill, however. Its steering feels linear and precise, its braking is strong and predictable, its sound is an appealing twin-cylinder rumble, and its seat is flat and comfortable. On the highway, that forward lean catches the wind in a supportive fashion, and the sound exiting the chrome exhaust pipes is throaty and sensual. It can be a pleasure, especially if the road takes a few turns.

Like the Shadow, however, the Guzzi is driven by an engine that makes sufficient but never impressive power. Both motorcycles will accelerate briskly in lower gears, but feel tapped out in the higher gear range. To be clear, both engines are V-twins, though the Guzzi’s air-cooled V is sideways and the Honda’s is front-to-back, and both make less than 50 horsepower (the Guzzi claims 49; Honda doesn’t publish power numbers for the RS, but we’re told it’s a bit more than 40 hp). The Guzzi is a two-valve design with pushrods, and the Honda gets three valves and two sparkplugs per cylinder. The Honda is liquid-cooled. Both are fitted with electronic fuel injection, which was free of glitches.

These motorcycles work hard to look like they were built 40 years ago, but they are modern motorcycles. Electric starting is standard, of course. The Guzzi is pushed by a drive shaft, and the Honda has a chain final drive. Both have simple forks and dual rear shocks with a small measure of adjustability (adjustable spring preload in the rear shocks is on both bikes, but the Guzzi also gets adjustable rebound damping). A nice addition to the Guzzi is Brembo brakes front and rear, with a four-piston caliper acting on the single-disc front brake. The Honda is fitted with a dual-piston caliper up front and a drum rear brake. Braking action on both bikes was smooth and powerful enough to bring them to a stop quickly.

In operation, these are very different motorcycles: one is an old-school cruiser, and the other is an old-school café bike. While the Honda disappears beneath the rider, the Moto Guzzi hurls its presence into your face. Take the Moto Guzzi out to a back road with a few twists, and its stable, crisp handling and café seating position create joy. In a crowded downtown environment, the Honda RS makes good use of its small size and sprightly acceleration in lower gears, but it also makes a nice, cushy cruiser for ambling along a country road.

If you accept the performance limitations of twin-cylinder 750 cc motorcycles, the Honda RS and the Moto Guzzi V7 provide acceptable acceleration and smooth handling, and on city streets, both are nimble and quick enough to get past traffic jams. In fact, we found that each of these motorcycles got us across town very quickly; they’re small and narrow enough to be thrown around when the traffic gets dense, and in second gear, each will make a quick getaway when that bus tries to pull into your lane. If each bike will perform well in city driving and moderately well on highways (though the Honda’s upright seating position does fight the wind, while the Guzzi’s seating position makes use of the wind to support the rider), the difference between them comes down to style.

These bikes were built to sell on looks. If you can adapt your eyes to the Legnano Green paint, the Moto Guzzi V7 Café Classic is a very good-looking motorcycle, with some nice chrome accents and a taught, fit appearance that is reflected in a wet weight figure of 198 kg (437 lb). Its appeal is in the homage it pays to an old style of motorcycle and the simplicity and good taste with which it is endowed. The Honda Shadow RS is painted in Heavy Grey Metallic and also has the appearance of being at a tidy fighting weight, though its wet weight is a little puffy at 230 kg (507 lb). The Honda pays tribute to American motorcycles of the past, and in that it strikes a classic pose. This magazine has said before that Harley-Davidson’s Sportster line runs straight to the heart of motorcycle design — whatever you think of the bike’s performance, its look is pure, simple, and masculine.

However, the Honda Shadow RS is an unexciting motorcycle. It’s easy to ride and will get you home through city traffic quickly, it will look great in your driveway, and with a Canadian list price of $8,899, it will leave you enough money to buy that James Dean T-shirt you’ve always wanted. But will it haul you out of bed at 6 a.m. on a sunny Sunday for an out-of-town blast? Not likely.

The Moto Guzzi will also look great in your driveway, but will cost you an extra couple of grand, at $10,895 for the 2010 model. We think it’s more likely to also look great going down the road early on Sunday morning, and for us, that’s almost enough difference to declare the Moto Guzzi a winner.

We say “almost,” because we’re imagining the effect of that $2,000 price differential on the appeal of the Honda if you were to pump the cash into the engine. Would the Honda become suddenly exciting with 20 more horsepower? It’s a good bet, and riding a motorcycle that started out as one thing and is turned into something else can be thrilling; you notice the difference.

However, we’re not comparing what the Honda could be against what the Guzzi is; we’re comparing today’s real motorcycles, and in that case, the Guzzi still almost wins, but the Honda definitely loses. If that sounds a little confusing, remember that we’re talking about Italian and Japanese motorcycles that pretend to be British and American bikes from the 1950s and ’60s — nothing could be straightforward in a comparison like this.