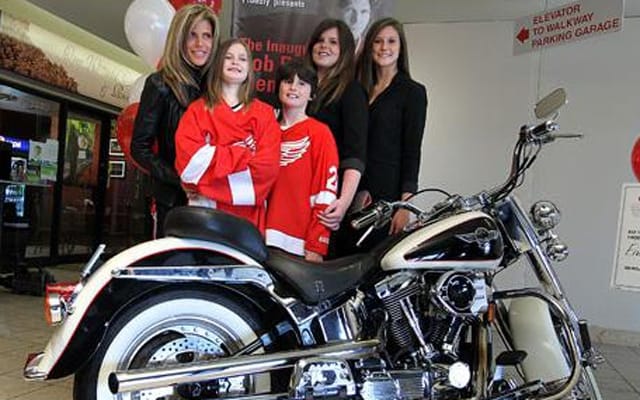 A Windsor Ontario hospital in conjunction with the CAW has organized a charity ride in memory of late NHL tough guy Bob Probert. And retired star defenceman Chris Chelios, Probert’s onetime Detroit Red Wings team-mate, has agreed to be the event’s “road captain.”

Funds raised by the charity ride will support the angioplasty program at Hotel-Dieu Grace hospital in Windsor, Probert’s hometown.

Probert died last summer of a heart attack while boating with his family on Lake St. Clair. His widow Dani Probert, on hand with her children at the Windsor Radisson Hotel to promote the ride, said her husband loved riding and collecting motorcycles.

“My daughter and I are talking about getting our licences and hoping to ride Bob’s bikes one day,” she said.

The inaugural Bob Probert Memorial Ride will take place on June 26 commencing at Detroit’s Joe Louis Arena. Riders will cross the border into Windsor and then wind their way through the city and out into Essex County in southwestern Ontario.