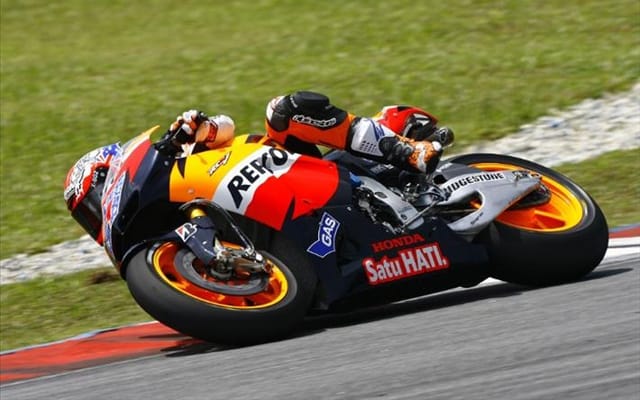 For the second consecutive day Casey Stoner topped the time sheets during MotoGP testing in Sepang, Malaysia. The Australian led a one-two-three finish for the Repsol Honda team, after besting team-mate Dani Pedrosa by 0.058 seconds on the final lap of the day with a time of 2 min. 0.171 sec. Andrea Dovizioso rounded out the top three, 0.360 seconds adrift of Stoner. Once again two Yamahas also made it into the top five. Factory Yamaha rider Ben Spies had the fourth fastest time of the day followed by defending champ Jorge Lorenzo in fifth. The top Ducati rider today was Aspar Ducati’s Hector Barbera in tenth place. Valentino Rossi was forced to take the day off due to illness.

“We tested a lot of things today, 2011 forks and things like that, but a good 60 percent of the day was pretty useless for us,” said Stoner. “We tried a lot of configurations with the 2011 fork and shock. We found quite a lot more chattering with it. We couldn’t really get on with it. So that was a bit disappointing.”

“Yesterday we were working on making the bike better with what we had, and just comparing the two chassis options. Today we stayed 90 percent of the time on one chassis, just trying different fork configurations and changing geometry to try and get the bike to work with the new forks.”

“We never really found something that felt good, so I was a little bit disappointed to have spent so much time on that, but it was necessary to do.”