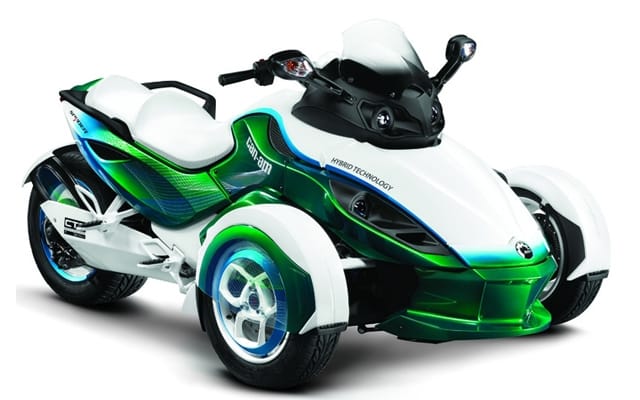 BRP Developing Hybrid Can Am Spyder

BRP has announced plans to develop a hybrid version of the Can Am Spyder. Working in conjunction with Sherbrooke University’s mechanical engineering department, the Quebec firm’s goal for the Spyder hybrid  is to maintain a 600 km range while cutting fuel consumption and greenhouse gas emissions in half. Rather than using the current Spyder’s 100 hp, 990 cc V-twin engine, a new 602 cc twin will be developed through the  R&D partnership and coupled with a 20 kW (27 hp) electric motor. The proposed Spyder hybrid, like Piaggio’s MP3 Hybrid, will give riders the option of running in gas only, hybrid, or electric only modes.

BRP says a production version is still 5 years away. Sherbrooke University’s Prof. Alain Desrochers will be heading the 4-year $11.3 million R&D project and says that turning the BRP’s quirky roadster into a hybrid vehicle poses  significant challenges. According to Desrochers, “There’s the lack of space to accommodate the hybrid motorization and issues concerning cooling, aerodynamics vehicle weight and noise”.

Automotive Partnership Canada (APC), a federal government initiative to help the automotive industry recover from the recession, is putting $6.2 million towards the project, with BRP covering the rest. BRP laid off 1,000 employees two years ago. CEO José Boisjoli says that “there is a very good chance” the hybrid Spyder would be assembled at BRP’s Valcourt, Quebec facility.