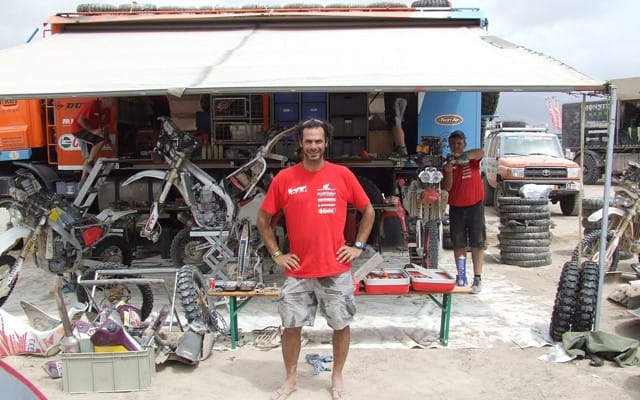 Trahan to Circle Africa for Charity

Patrick Trahan, the only Canadian to finish last year’s Dakar Rally, has announced his plan to circumnavigate Africa in 2011 in support of charity and set a new world record in the process. His goal is to travel 25,000 gruelling kilometres aboard a 2011 Honda XR650L through 26 countries in just 60 days (the existing record is 286 days) and more importantly to raise $25,000 for the Children’s Wish Foundation (1 dollar for every kilometre travelled).

“The Children’s Wish Foundation of Canada is very important,” Trahan said. “It took me 15 years to realize my dream to be at the Dakar and 10 more to finish it. Those kids don’t have 15 years, some of them have only 15 months. So they need an extra help to realize their dream. All I do is realize my dreams one after the other, now it is time for me to help them realize theirs. A dream might not be a new medication but has the power to permit those kids to live some magical moments with their family.”

To help Trahan reach his goal he’s asking that people purchase virtual kilometres for $1 a piece at his website rideafrica4wishes.com. The idea is that he’ll only ride the total number of kilometres sold, but Trahan says he’s confident that he’ll receive enough support to ride the full route. His website will also track initial fundraising and have live tracking during the trip, along with daily blog reports from Trahan.

To make a contribution go to www.rideafrica4wishes.com or visit the Honda Canada booth during the Toronto Motorcycle Show, December 10-12, where you’ll find Trahan in attendance along with his Honda XR650L.

And don’t forget to also drop by the Cycle Canada booth for a chance to chat with CC’s editor Neil Graham while you’re there!