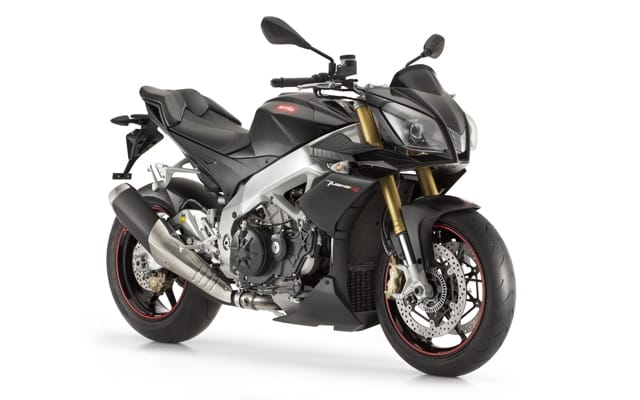 Aprilia hasn’t given us much yet on the new motorcycles they’re introducing at EICMA on Tuesday other than a few pictures. So all we know about the Tuono V4R from them so far is that it is supposedly “much anticipated” and “planned for arrival in the U.S. at the end of 2011”. Presumably that means we may see a few here in Canada for sale around that time too, but with Piaggio Group Americas’ Canadian distribution plan still questionable, who knows? Journalists reporting from the floor at EICMA in Milan are saying the Tuono V4R  has the same frame as the RSV4 as well as the superbike’s 65-degree V4 engine claiming 162 hp and 81lb/ft of torque. From the picture it looks like Brembos and ABS are standard. Stay tuned for more details as we receive them.

Brembo radial callipers mated with 320 mm floating discs at the front (220 mm at the rear) provide stopping power for newly designed aluminium wheels that are 2 kg lighter than those on the RSV4R. Suspension components are fully adjustable Sachs units, a 43 mm upside down front fork,  titanium nitride coated for reduced friction, and a piggy back monoshock.