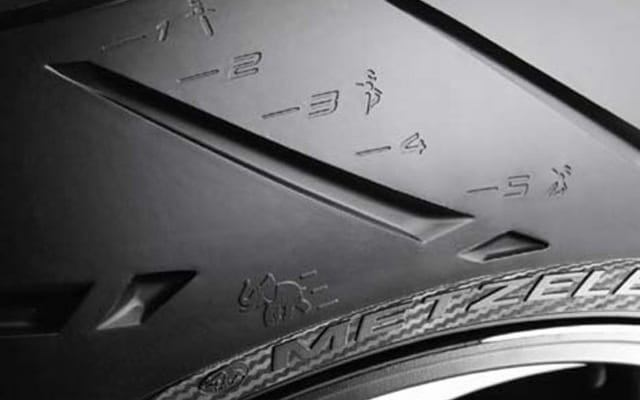 My eyes bulged in disbelief. The American journalist’s lack of judgement caused the Aprilia RSV4 to tumble off the wet track into the gravel trap. The only RSV4 at the track was now returned to the paddock where its life-sustaining fluids dripped into a widening pool on the concrete floor. I made a mental note that no tire can compensate for over-exuberance.

Torrential rainfall had already hit the coastal areas of Western Europe. In Portugal more than 40 people died in flash flooding on the Madeira Islands. The highway leading to the Autodromo do Algarve racetrack, near Portimão, had been washed away, and brooding clouds stubbornly remained over the track that was to host the launch of Metzeler’s Sportec M5 Interact.

The first thing that I noticed when I looked over the tire’s technical specifications was the lack of a multi-compound carcass. Instead, Metzeler imbedded 120 steel wires in the high-silica compound of the M5 to manipulate the rubber and to create five different grip zones. Metzeler calls it multi zone tension. The middle section of the tire has high-tension wires to reduce rubber movement for high-speed stability and reduced wear. Moving toward the tire’s shoulders, a lower tension cable allows greater flexibility in the carcass to increase tire temperature and feedback. Finally, on the outer shoulders, where the elephant resides (more on that later) and where the tire is subject to the greatest cornering forces, the tension is the lowest for maximum grip.

Metzeler claims an eight percent increase in the M5’s footprint at every lean angle over its other designs; knowing there’s more rubber on the ground is reassuring, but tires for me have always required a leap of faith. No amount of technical blather can overcome my fears that two little patches of rubber will not keep me upright. I need a racetrack for verification.

For a street rider, the time that a tire takes to reach its optimal operating temperature is paramount. Some buy racing tires with the misconception that they will give incredible traction on the street. Not so— racing tires only stick when they’re hot. But the M5, I’m told, can be ridden hard from the moment the wheel turns. They might be right. At speeds far beyond what you’d ride on the street, my first laps of the unfamiliar (and damp) track were done in safety. The second track session was ridden in drizzle and the third session was wetter still.

Added to the track sessions was a braking test on flooded pavement. Using an ABSequipped BMW S1000RR, I entered the flood zone at over 100 km/h and hammered the brakes. The bike tracked in a straight line and came to a drama-free stop. What was most impressive about the exercise was how hard the brakes needed to be applied before the ABS kicked in, a sign of how much grip the tires were able to find under the water. It wasn’t until the afternoon of the second day that the sun found its way through the clouds. The drying track was a mixed blessing; as dry lines formed, speeds increased and braking sections shortened, turning the partially dry track into a minefield of wet patches. While accelerating hard out of a corner I hit water, which immediately caused the rear tire to break loose. After clenching my buttocks in anticipation of a highside, I was relieved by how smoothly traction was regained.

Looking at the tire from its side, the tread grooves resemble the Greek letter Pi (a symbol for the ratio of the circumference of a circle to its diameter: 3.14159). The Pi tread pattern maximizes tire flexibility and footprint area, aids stability in dry conditions and optimizes drainage in wet, according to Metzeler. Also visible on the tire, and proof that German technicians have a sense of humour, is a lean indicator. The five-segment chicken strip gauge indicates lean angles of 25 through 45 degrees. Although the markings are shallow, it takes more than a heroic one-time lean to leave an impression on the gauge. Street riding will eventually erase the mid-carcass markings but to obliterate Metzeler’s iconic elephant on the very edge of the tire takes several laps at full lean. Only then can you claim to be an elephant-killer.

During the technical briefing a Metzeler rep praised the M5 by saying that “I would trust my mother-in-law to ride on these tires.” After two days of staying upright, and with a good relationship with my wife’s mother, I can confidently make the same recommendation.