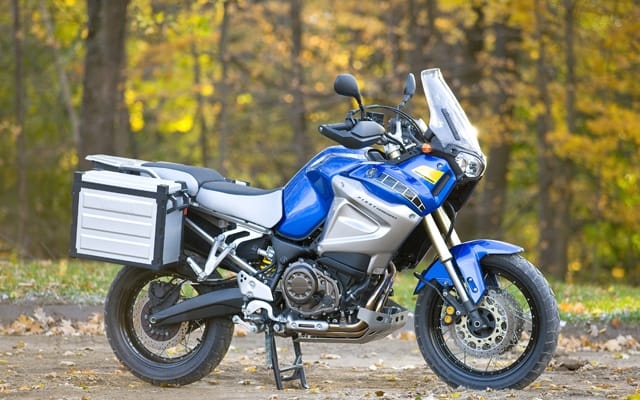 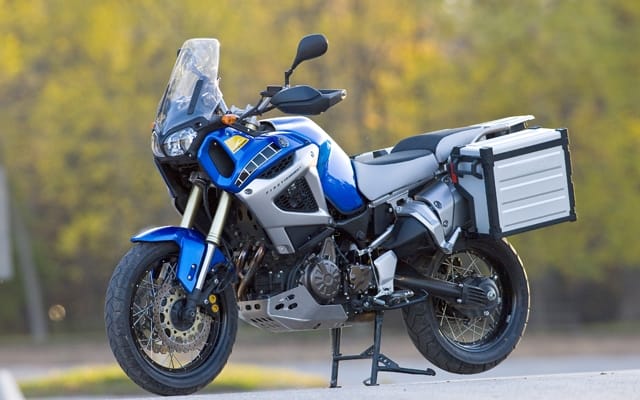 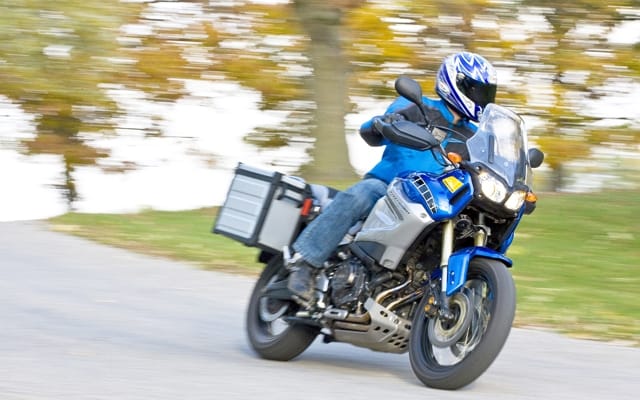 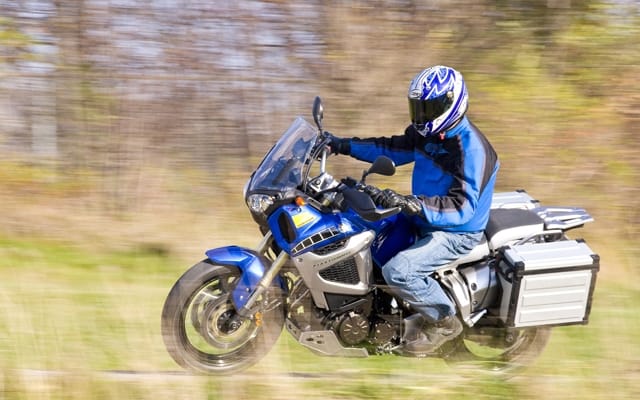 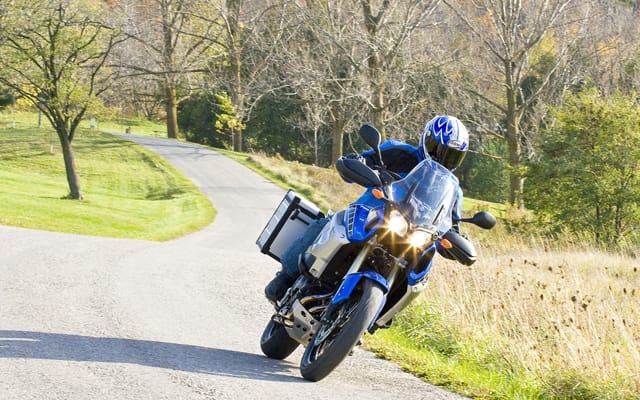 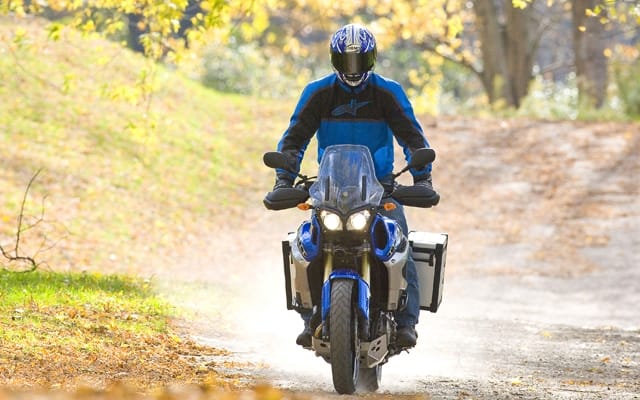 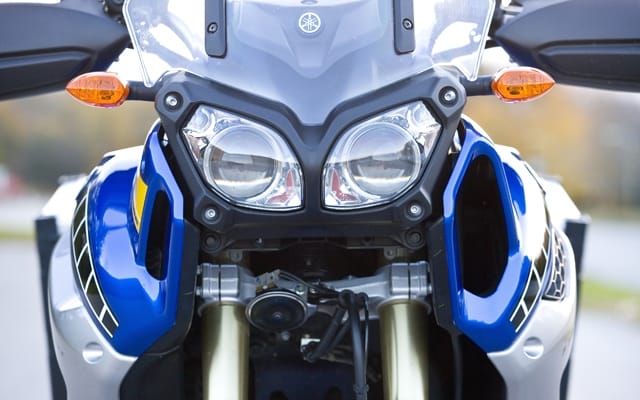 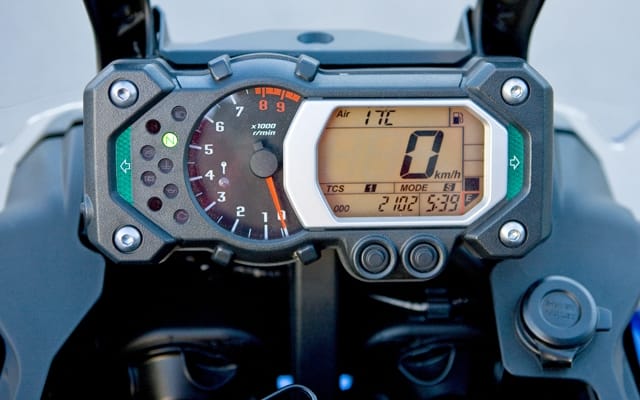 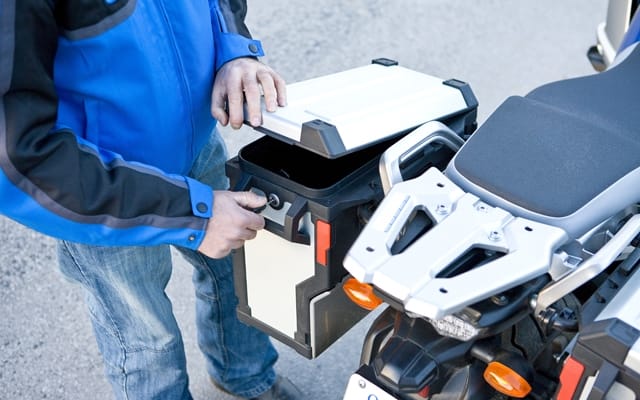 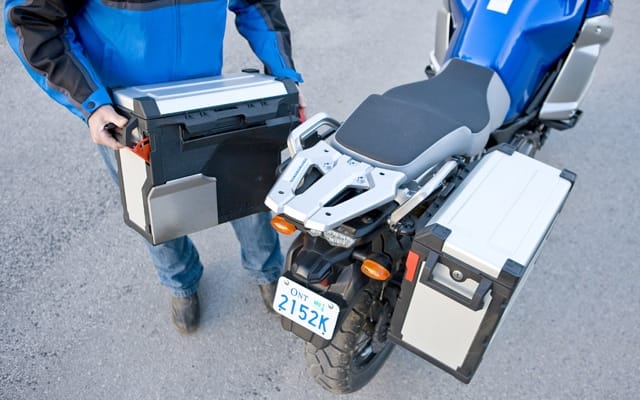 In appearance Yamaha’s all-new Super Ténéré is a typical adventure-touring bike. The platform is raised up on relatively long legs and possesses a recognizable contour: large gas tank, uplifted snout with a narrow windscreen, lots of ground clearance, and slab-sided aluminum panniers. A tubular handlebar, tall mirror stalks, and 19-inch front wheel complete the picture of a motorcycle that’s meant to handle any road and some off-road territory with equal levels of bravura.

A second look reveals some nice touches. The brakes use wave-style rotors and are equipped with ABS. Footpegs are given rubber inserts to quell vibration, but the rubber is pliable enough to compress under the weight of a standing rider, allowing the foot to sink down to metal serrations for a sure-footed grip.

The Super Ténéré looks comfortable, and looks don’t lie in this case. The handlebar-seat-footpegs relationships are nicely spaced for a sit-up-and-beg posture that looks and is comfortable, even on long rides. The seat is flat and adequately padded, firm without being punishing, and long enough to allow fore-and-aft rider movement. One nice feature for shorter riders (one of our testers was five foot nine) is the seat’s adjustability: at high position it’s 870 mm from the ground (34.3 in); at low, it’s 845 mm up (33.3 in). The small amount of adjustment should make parking lot manoeuvres less intimidating for sub six-footers.

The windscreen, brush guards in front of the handlebar grips, and minimalist fairing panels are surprisingly effective wind cheaters. Although our five-nine tester experienced helmet buffeting, a taller rider’s head was in smooth air, and except for the shoulders and upper thighs, windblast was not noticed at highway speeds. That allowed for a comfortable hour-long ride at temperatures below 10 degrees—the brush guards doing a good job of deflecting wind away from the hands and making Yamaha’s omission of handgrip heaters less of a distraction.

Suspension also aided comfort. The fully adjustable 43 mm inverted fork and the rear shock, adjustable for spring preload and rebound damping only, were supple enough to soak up good-sized road bumps but firm enough to retain composure in more demanding conditions. We didn’t feel a need to adjust suspension settings from the factory defaults.

At the heart of the matter lies the Super Ténéré’s engine, a vertical twin displacing 1,199 cc. The eight-valve twin-cam mill claims 80-plus lb-ft of torque and 110 horsepower, and from the saddle it feels like an honest 100–enough to accelerate the bike rapidly, given its 261 kg wet weight. That weight is 32 kilograms heavier than the Ducati Multistrada and a little more than 14 kilograms heavier than the Yamaha’s main competitor, the BMW R1200GS. The Yamaha feels heavier, too, though its wide handlebar and low centre of gravity allow light, responsive handling in street riding situations.

The engine is effectively counterbalanced and produces vibrations that can be felt under load but that do not become unpleasant—fatiguing vertical-twin vibration is, mercifully, nonexistent. At normal highway speeds, rear view mirror images remain sharp. With a 7,500-rpm redline, it’s not a motor that loves to be revved, but good power is available from 4,000 to 7,000 rpm and snapping the throttle open from 3,000 rpm in first gear results in a quick, powerful lunge that will straighten a rider’s arms with force. Shifting anywhere between 4,000 and 6,000 rpm allows the motor to stay inside its wide powerband and produces satisfying but not startling acceleration.

One feature that’s becoming increasingly common on big-bore street bikes is the dual mode power switch, operated here by the right thumb. Close the throttle, hit the switch, and the power mode changes from S (Sport) to T (Touring). In T mode the engine performs adequately, allowing brisk acceleration to highway or supralegal speeds, but it’s more fun in S mode: you get a nice snap of acceleration in the lower gears.

The Super Ténéré is fitted with electronic traction control and allows the rider to switch traction control modes when the bike is stationary. A display on the digital dash says TCS 1 in default mode, but by pressing a button on the left side of the instrument case, you can change to TCS2 or Off. TCS 1 employs the most traction control, but still allows some wheel slippage on a dirt surface. TCS 2 allows more wheel slippage. In neither mode did the bike feel like it was about to step out of line, and in both modes there was a surprising amount of power at the back wheel.

ABS brakes should also help prevent the bike from stepping out of line, of course, and in this case, they’re linked, some of the time. Squeeze the front brake lever first and braking force is apportioned between front and rear brake systems, but tap the rear brake lever first, and separation occurs. This way, you can apply the rear brake only for assistance in slow speed manoeuvres. We experienced moderate front-end dive when grabbing a handful of front brake, and while the brakes are reasonably strong, feedback is a little wooden.

Even though it’s a little heavier and a little less powerful than some of its competitors, it’s a comfortable, smooth, and quick motorcycle that can be ridden through cold temperatures and even bad weather without flinching, and could be turned into a very good sport touring motorcycle simply by taking it on a sporting tour.

The saddlebags are large and sturdy, and their mounting system is acceptably simple and very secure: turn the key one way and the lid pops open at the back; turn the key the other way, pull out a lever at the back and rotate a lever at the front, and a ramp slides out from under a rail, allowing the bag to be removed.

After riding for an hour on the 400 in cold temperatures and then another hour through Toronto, one tester was reluctant to get off the Super Ténéré. That says something for its amusement factor, and especially for its comfort level. But just being a good motorcycle won’t guarantee the Super Ténéré a charmed existence. As an adventure tourer, it is up against formidable foes like Ducati’s Multistrada and KTM’s Adventure, not to mention BMW’s R1200GS. Much will depend on its price, which has yet to be announced, but from what we’ve learned in this first test, Yamaha’s Super Ténéré has, at the very least, a fighting chance.

The Yamaha Super Ténéré is officially listed as a 2012 model but will be on dealer floors in June 2011. Pricing is TBA.