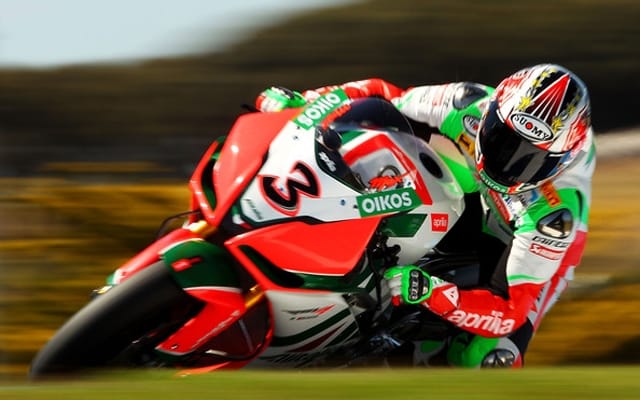 It’s official, Max Biaggi has finally signed a 2-year deal with Aprilia. The Italian manufacturer sent out a press release today saying so, meaning the Roman Emperor will indeed return to defend his WSBK title on the RSV-4 after a dominant season that saw him take 10 wins.

“I’m obviously very happy to be continuing this winning adventure in World Superbike with Aprilia,” said Biaggi after the announcement. “After an exciting but tiring season, after many years of racing and many victories, it was only natural and right to stop and think, to reflect on such an important future commitment.

“In my considerations a very decisive factor was, as it was at the beginning of this adventure with Aprilia, the fact that I feel so close to a team and a company which is so capable and so focussed on the sports objective.

“Now we need to prepare as best as we can for next season. We are well aware that we cannot rest on our laurels and that we will be in all of our rivals’ sights. But now I am also sure that we will be highly motivated at the start of the first race, with a bike which I have brought up and which I did not want to abandon, ready to die hard… extremely hard”.

Biaggi will be joined again in 2011 by Briton Leon Camier as team-mate.