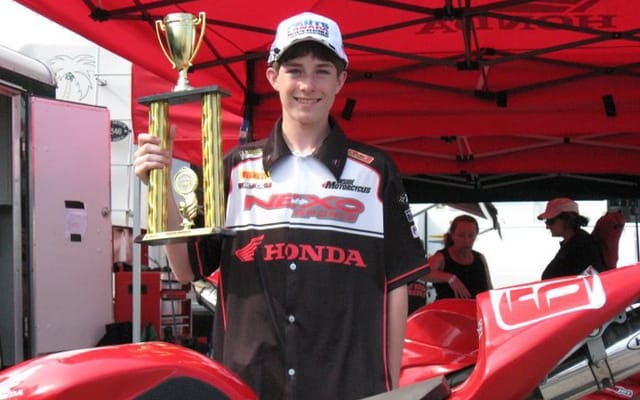 Canadian amateur road racer Steven Nickerson has been selected to attend a two-day trial for the 2011 Red Bull MotoGP Rookies Cup series at the Monteblanco circuit in Spain, September 13-15, 2010. The news caps off a successful first season for the 15-year-old Hamiltonian in the Amateur Sport Bike class of the Parts Canada Superbike Championship series. Nickerson finished third overall in the 2010 Championship standings.

The Red Bull MotoGP Rookies Cup is a program designed to develop promising young motorcycle talent from around the globe, allowing riders to compete on world-class racing circuits across Europe on identical KTM RC125 race bikes in front of Grand Prix fans, teams and the media. Nickerson will be one of numerous 13 to 17-year-old riders from around the world vying for a spot in the series.

“This is an opportunity of a lifetime. My main goals are to have fun and improve each time I’m on the track,” said Nickerson. “I know whatever the outcome I will have learned so much and have had a very memorable experience.”