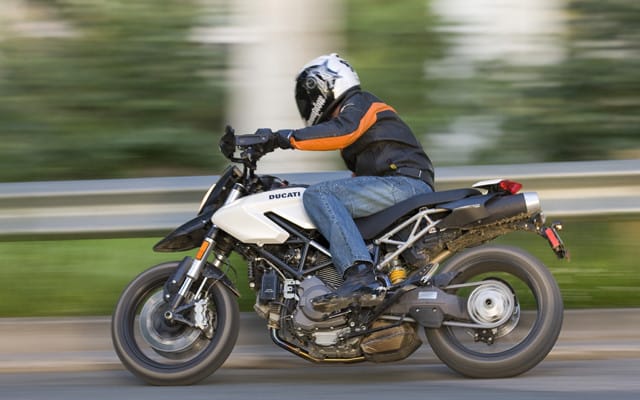 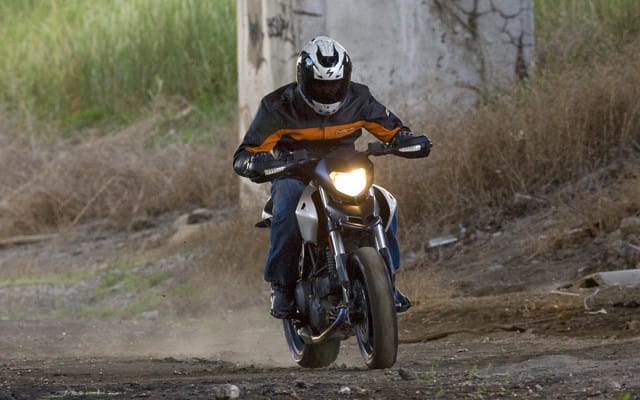 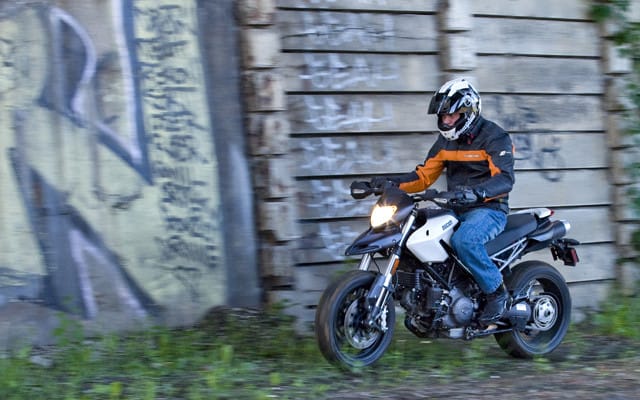 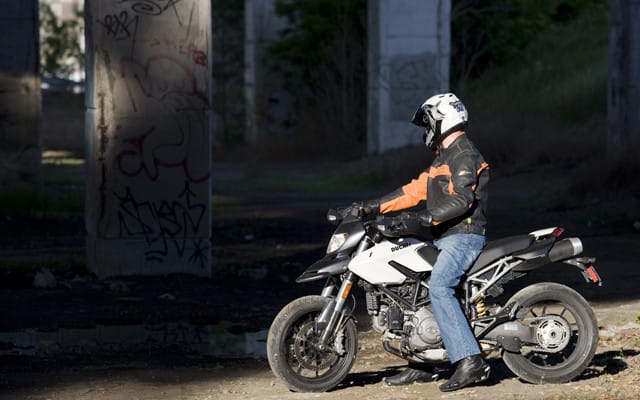 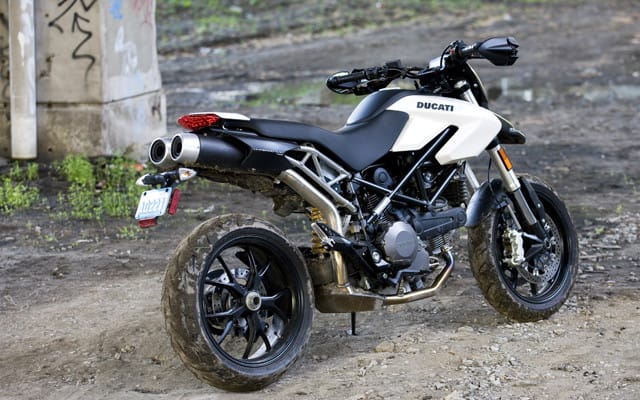 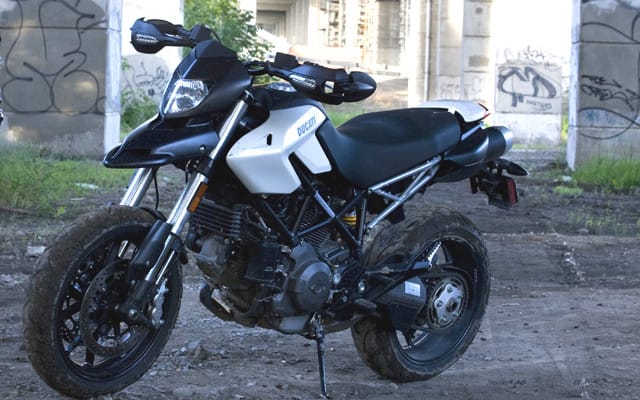 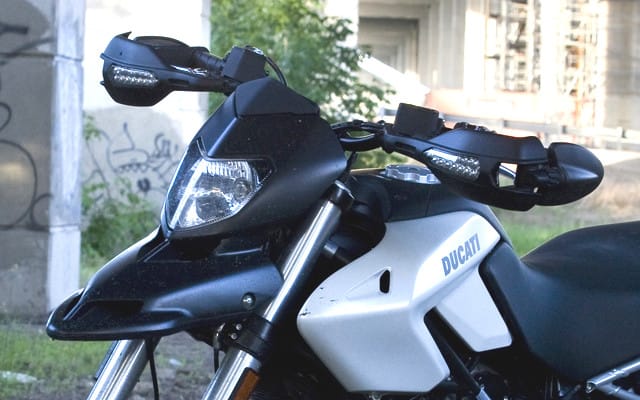 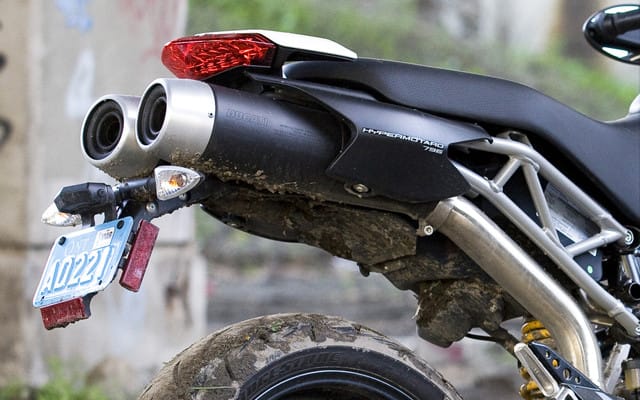 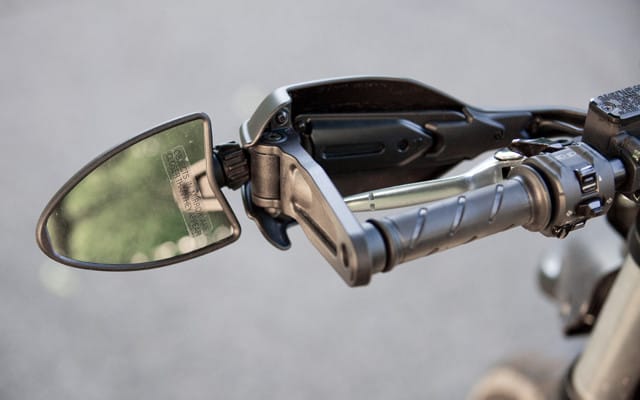 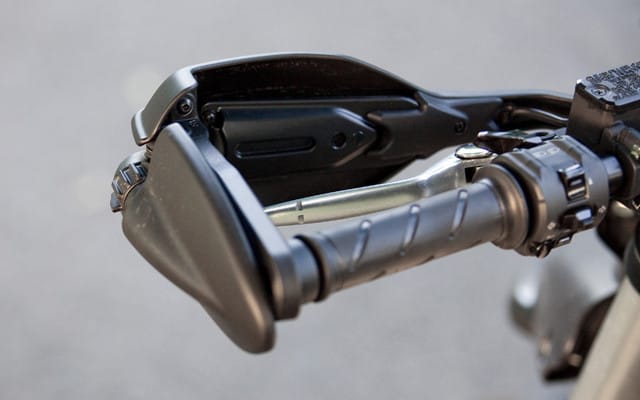 We have nearly ridden off the road for any number of reasons. Sometimes we think we see the shapes of police cars in low-lying clouds; sometimes we’re just bored and our attention wanders. But this was a first. As the rains came down, the spray from the front wheel of the Hypermotard 796 shot forward into the air and the headlight beam froze individual water droplets as effectively as a camera’s flash. It was beautiful, but, alas, too distracting for our test-riding aesthetes—it was the first time we’d ridden through water sprayed off our own motorcycle. But once the pavement dried the distractions ended and the frivolity began.

Not so long ago the motard movement was new; it only seems like it’s been around forever. The Hypermotard 796 has stayed true to the original theme in its look and riding position. While in the saddle the back is straight, the forearms parallel the ground and the feet settle below the hips. And the handlebar is right there in front of you—no need to lean forward. The seat, also in motard tradition, is sharply shaped and sparingly padded, resulting in some pain to the sit bones.

Powering the smaller of the two Hypermotard models in Ducati’s lineup (the bigger motor is 1,100 cc), the 796 cc air-cooled two-valve engine—new for 2010—is a keeper. The engine chuffs and clatters a little at idle in the Italian fashion, and the exhaust note is satisfying without being too loud. Claimed horsepower is 81 (at 8,000 rpm) and claimed peak torque of 58 lb-ft arrives at a usable 6,250 rpm. 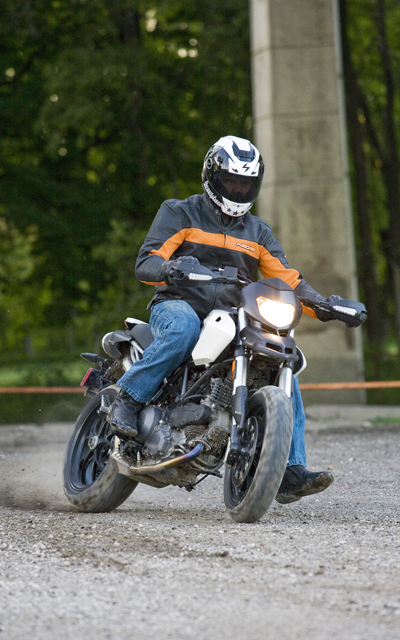 The ample torque from the engine and the good sightlines provided by the bolt-upright riding position suggested to us that we interpret the lanes on the road—and indeed the roads themselves—as merely suggested places to ride. We stopped short of using a battered Hyundai as a berm to shoot us down a sidestreet, but we did hump it over curbs and took shortcuts through abandoned lots.

When the rains finally ended we hit the highway in search of green pastures, but at speed the 796 garnered a split decision. In its favour was gearing much taller than the motard norm, which allowed relaxed travel at speed. However, as is Ducati’s norm, the gearing is so tall that sixth gear was only suitable for speeds on the far side of 120 km/h. But the ramrod-straight seating position and lack of substantial fairing made the 796 vulnerable to wind and buffeting from transport trucks.

The clutch and gearbox displayed a mixture of characteristics we liked sprinkled with minor irritants. Lubricated by the engine oil, the clutch is quiet and the pull light—very nice. But the engagement point is in the last quarter of its travel, and coupled with the engine’s cold-blooded nature during warm-up and a tall first gear ratio, stall-free starts required additional revs and a slipped clutch. The gearbox was slick, if a little notchy, but our tester had relatively few miles and, as we have found on other Ducati test bikes, its operation will become smoother with use.

One of the Hypermotard’s most distinctive and brilliant design elements was also a cause of some irritation. The combination hand guards, turn signals, and rear view mirrors are spectacular in concept but flawed in execution. In their favour, the mirrors fold down easily to aid tucking the machine into a garage (they also fold flat neatly when you bash into a car’s rear view mirror while you’re splitting lanes, by the way). The view to the rear is excellent, and vibe free once the engine is spinning. What we didn’t like was their tendency to sag, even though we tightened the mounting hardware on two occasions.

Even taking into account our criticisms, the $11,495 Hypermotard 796 is just about ideal if your riding is primarily urban or if you’re lucky enough to have tight, twisty roads close to your house. We are without the good roads where we live, but we’d still choose this bike over many so-called commuters because of its compliant suspension and tower-over-traffic riding position.