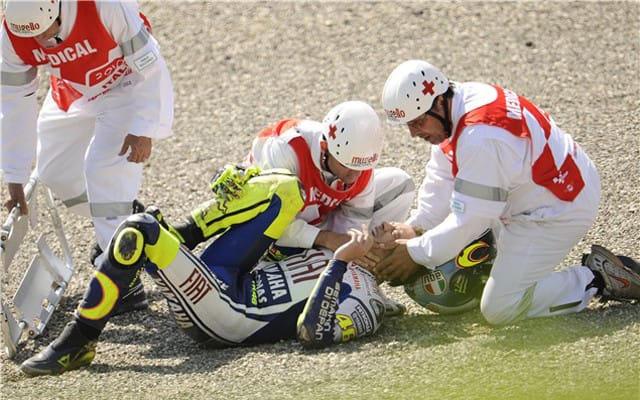 Just six weeks after seeing his shin bone poking through his skin after a crash during practice at Mugello, defending MotoGP champion Valentino Rossi has been given the all-clear by Sachsenring’s chief medical officer to return to competition at this weekend’s German Grand Prix. Still on crutches, Rossi will hobble to his M1 and race with his right leg sheathed in a cast while wearing a boot and leathers specifically made to accommodate it.

“It will be hard for me, but I miss my bike and my team and I want to try,” said Rossi at a press conference. “I am really looking forward to seeing everyone and being back in the paddock; I was tired of being at home! [Yamaha test rider] Wataru [Yoshikawa] will be there as well, so if there is a problem he will ride my bike again.”

Rossi test rode 46 laps on Cal Crutchlow’s R1 superbike at Brno this past Monday, clocking a best time of 1’59.135 seconds, just over one second shy of Crutchlow’s pole qualifying time, two days before, of 1’58.018 seconds.