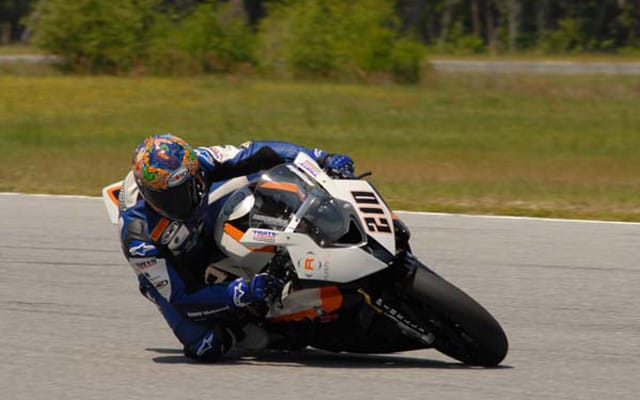 The participation for the first time of BMW’s S1000RR in the Parts Canada Superbike Championship, has forced Professional Motorsports Productions (PMP), the series’ governing body, to raise the horsepower limit in the feature class to 190 for the 2010 season—an increase of five horsepower over the previous class limit.

“We would have preferred not to make this decision so close to the start of the season,” said Peter Hoogeveen, technical director of the Parts Canada Superbike Championship. “But we wanted to be sure to have the most reliable and accurate data on hand. We wanted to test the BMW ourselves in Canada, on our own Dynojet Dyno and with our own staff, before making the ruling.”

Horsepower limits for each of the Canadian racing series’ classes are assessed on an ongoing basis and increases are made to reflect improved performance in stock equipment.

Prior to the start of the 2003 season, the Superbike division was unrestricted and bikes were not held to a horsepower limit. According to PMP, the current production-oriented feature class machines produce power on a par with their predecessors in the unrestricted era.

“The pace of motorcycle development over the past several years has been quite remarkable,” said PMP President Colin Fraser. “Trying to keep up with the performance improvements of the latest equipment while ensuring a fair playing field for our competitors is a tremendous challenge, but we are confident this latest increase in the horsepower limit will be a positive move for our series.”

According to PMP, four BMW S1000RRs are expected to compete in Canadian Superbike this season: Two-time national champion Francis Martin of Sherbrooke, Quebec will team up with Kitchener, Ontario’s Mike Ferreira in the BMW Motorrad Canada factory squad, while entries are also anticipated from fellow Ontarians Andrew Nelson and Steve Walker.