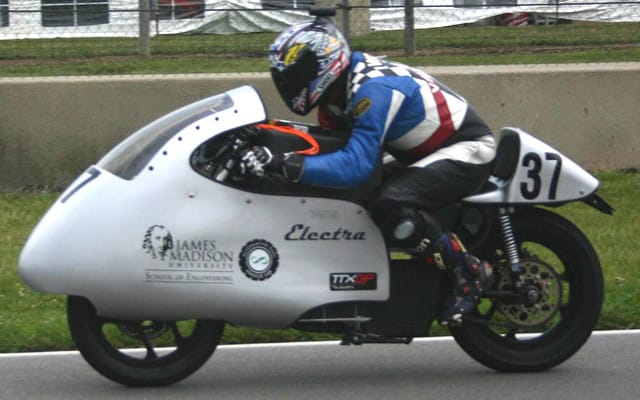 Twelve teams have entered the first-ever TTXGP race to take place in North America at California’s Infineon Raceway on May 16. This is a better turn out than the 5 entries in the first race of the rival FIM e-Power series, but still far fewer than the 20 teams that participated in the fledgling series’ first race at the Isle of Man last June.  As expected Brammo, MotoCzysz and Mission are missing from the field of eclectic entrants that run the gamut from a production built Mavizen TTX02 and an as-yet-unseen Zero/Agni collaboration to Brian Richardson’s Electra, a 1966 Norton Atlas conversion (pictured).

Electric Motorsport, a.k.a. Native Cycles, won the open class of the 2009 Isle of Man TTXGP (for bikes that cost less than $33,000 to build) using a modified version of its production electric GPR-S motorcycle. The only Isle of Man TTXGP competitor to compete in the TTXGP North America, Electric Motorsport will race a converted Yamaha R1 with a custom-wound AC induction motor and a 10.5 kilowatt-hour, 108-volt battery pack capable of propelling the bike to 120 mph.

An international partnership, ZeroAgni outfits an electric street bike from Santa Cruz-based Zero Motorcycles with a British-based Agni Motor – the same DC motor that propelled the Agni Motors  motorcycle to the top of the podium at the inaugural Isle of Man TTXGP  with an average speed of 87.734 mph, and a top speed of 106 mph, on the 37.73-mile course.

Founded by American pro rider Chip Yates, the Swigz e-bike is built using the frame of a Suzuki GSX-R750 and produces 190 horsepower from its liquid-cooled, permanent magnet DC motor.

The K Squared Racing motorcycle is built from a production Zero S street bike from Zero Motorcycles in Santa Cruz with a modified Aftershocks suspension. The bike uses a permanent magnet brushed DC motor and 5.4 kilowatt-hour battery pack. Its top speed is 110 mph and its range (at race pace) is 30 miles. Zero electrical engineer Kenyon Kluge will race the bike.

The only licensed antique vehicle to race the TTXGP, the Electra is a 1966 Norton Atlas retrofitted with a lithium polymer battery and 118-volt AC induction motor. The 50-horsepower bike claims a top speed of 120 mph.

Pril will race a next-generation version of its XR1 – a converted Kawasaki Ninja that, in its original version, was powered with six lead-acid batteries.

Volt is Lore and Eland Eggers, employees of Thunderstruck, a longstanding mom-and-pop EV shop in Sebastopol, California. They’re Yamaha R1-based machine claims a  top speed over 100 mph and a range close to 75 miles.

Long time racer Wendy Epstein  and e-bike entrepreneur Bob Schneevies met by chance at an indoor short track electric motorcycle exhibition and formed an instant race team relationship. Apparently you’ll have to wait until race day to find out what their relationship has borne.