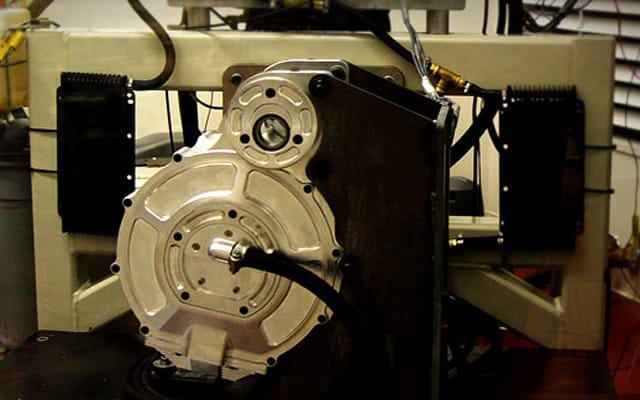 The Sound of the Future?

Watching an electric motor being dyno tested isn’t particularly interesting, but what is compelling about the video below is the sound that MotoCzysz’s D1-10 liquid-cooled, permanent magnet AC motor makes as it spins in excess of 16,000rpm and cranks out over 100hp and 250lb/ft of torque (at the rear wheel). We think at very least its impressive wail is sufficient to shout down any naysayer’s cries of e-bikes not sounding good.

What remains to be seen however is how Michael Czysz’s $42,500 (USD) Electric D1g1tal Dr1ve will perform on the track. As notable as its output sounds, the bigger question is: How long can it race on a single charge? For instance, we’re hearing now that the FIM e-Power race at Le Mans this past weekend was even more of a flop than initially reported. Not only was the grid comprised of only 5 entries, one of them being a scooter, even after the race was reduced from 8 laps to 6, just 3 bikes had enough battery power to propel them across the finish line.