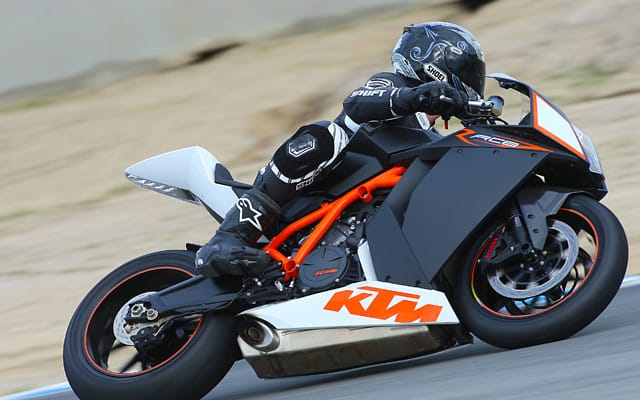 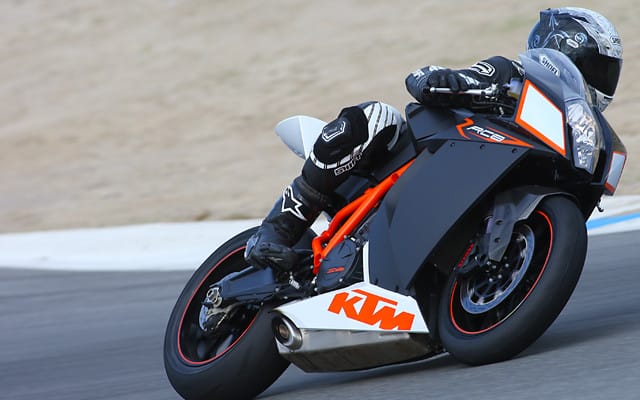 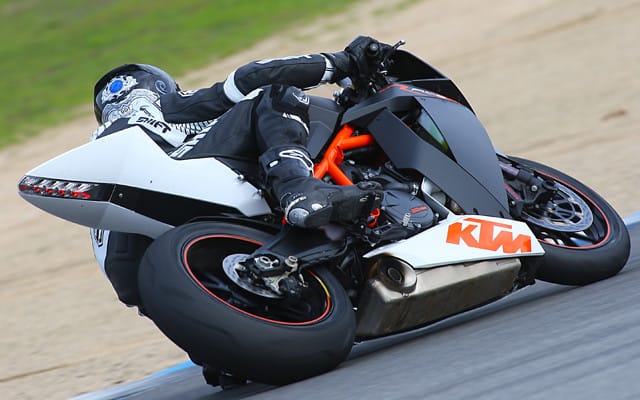 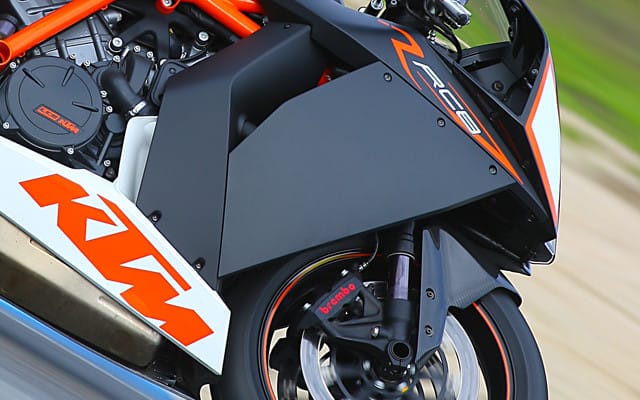 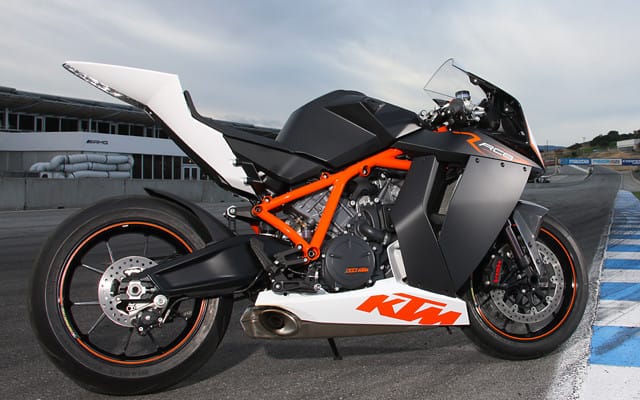 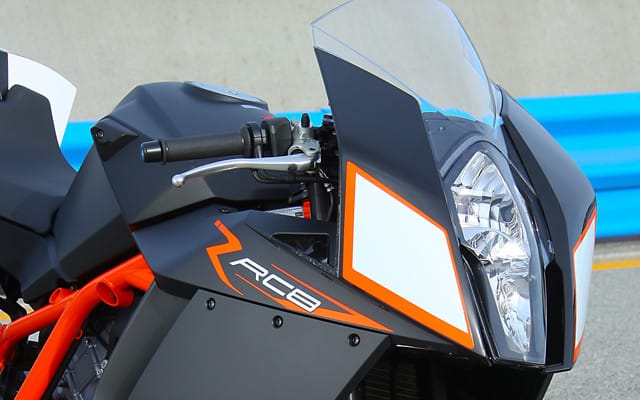 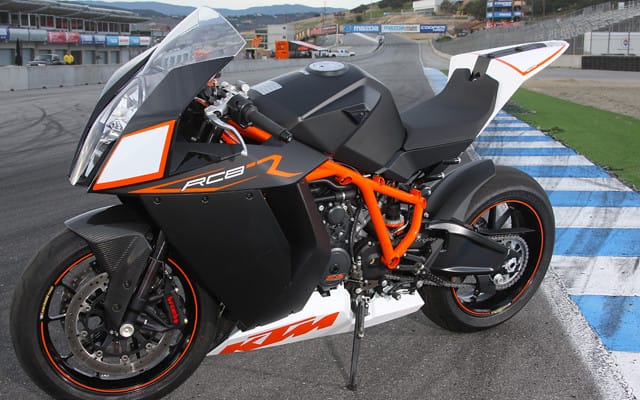 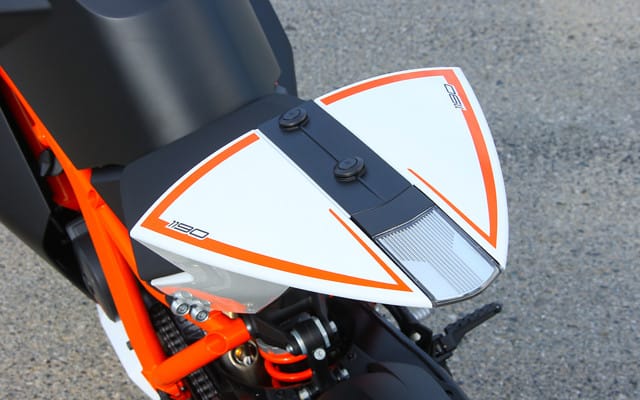 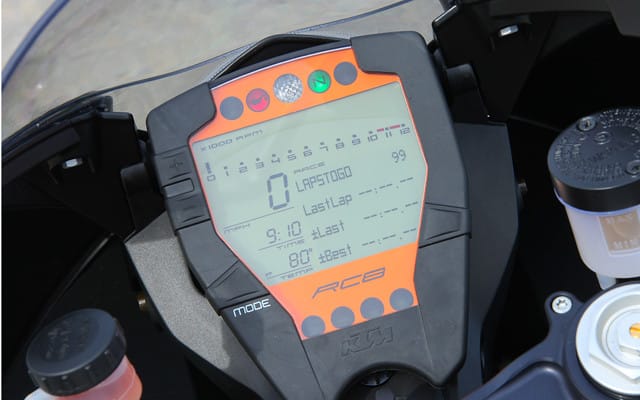 With the RC8R, KTM prepares to take its superbike to the world stage. Neil Graham writes about what this means for the common man.

With my head down on the fuel tank I hammer toward the most famous left turn in motorcycling. No television-watching or video game-playing can suitably prepare you for the first time you confront Laguna Seca’s corkscrew. It would be a tricky bit of road on a bicycle. On a motorcycle at racing speed it’s unimaginable.

Near the end of my first session, I quicken my pace and have a holy-shit feet-off-the-pegs ride to the edge of the curbing. Once my breathing slows I chuckle inside my helmet. I have joined, in my modest way, a select group of riders from thrashers to world champions who have had a terrifying ride through the corkscrew. And then I remember. I am here to test a motorcycle and not just ride the track. Oops.

Forgetting the motorcycle that you’re riding is, in a peculiar way, the highest of compliments. A machine’s ability to fade to the background speaks to an inherent balance in its design (a Boss Hoss, for instance, never fades from front-and-centre). The KTM RC8R is, for an open-class supersport made by dirt-bike-mad Austrians, a surprisingly compliant mount.

The RC8R’s V-twin shoves the bike’s claimed dry weight of 182 kg forward with such nonchalant fury that it is impossible to sense any peaks or valleys in its powerband. Its power is electrically smooth. It calms and reassures. I breathe deeper, I look farther ahead and my arms relax. I also go faster. The final point is significant.

Introduced at the EICMA motorcycle show in Milan in 2008, the RC8R is the next logical progression of the RC8. Early in the RC8’s development KTM was bullish about jumping straight into World Superbike racing, but the RC8’s 1,148 cc displacement left it considerably under the 1,200 cc allowed for twin-cylinder machines by most race governing bodies and so KTM held off on a World Superbike endeavour. The RC8R increases the base RC8’s bore by two mm for a displacement of 1,195 cc, making it, as KTM’s advertising tagline says, “ready to race”. The time for KTM to prove that, is now.

The RC8R’s boost in displacement accompanies a compression ratio hike (to 13.5:1) that contributes to a claimed horsepower of 170 (the RC8 claims 155). Less dramatic, though helpful if you’re a capable tuner, are the adjustable cam sprockets that allow valve timing to be tweaked.

To combat the criticism that the RC8 could be nervous at speed, the RC8R’s trail was increased to 97 mm from the RC8’s 91 mm. KTM is kind enough to supply its standard RC8 at the launch, and the difference between the two machines is noticeable. At my pace I don’t so much perceive the RC8 as unstable as I admire the RC8R’s reassuring solidity.

Offsetting the potential for the increase in trail to slow steering appreciably are the forged Marchesini wheels, two pounds lighter than the RC8’s cast wheels. Losing that much unsprung weight quickens steering and allows the tires to better stay in contact with the tarmac.

Four-piston radial-mount Brembo calipers and 320 mm rotors—standard kit for this kind of bike—handle braking duties, but what’s really impressive is their friendly nature. A hell-for-leather passing manoeuvre required me to brake heavily at maximum lean, but even my slightly panicked application of the brakes was perceived by the bike as a smoother input than it was.

There is not a soft edge anywhere on the RC8R’s bodywork, but its foreboding razor-like severity is not borne out by the facts—it’s a remarkably adaptable steed. The usual things like brake and clutch levers are adjustable, but KTM kept going. The clip-ons, footpegs, rear brake and gear shifter have adjustability, along with the seat, via a subframe with two mounting options. For a hardcore supersport it would likely make a surprisingly livable everyday bike.

Another perk of the RC8R over the RC8 is increased ride height adjustability. There’s also an improved windshield, which is claimed to provide smoother airflow at high speed, but I was hanging on too tight to notice.

At $22,998, the RC8R is $4,000 more than the RC8, which is enough money to buy a lot of track days. But if you’re only interested in economical track days there are better choices to be had. What the RC8 and RC8R offer is exclusivity. Since the RC8’s introduction in 2007, I have only seen one at a track day. The combination of useful practicality and look-at-me exclusivity makes the RC8R a temping proposition for the enthusiast who skips to their own drummer.