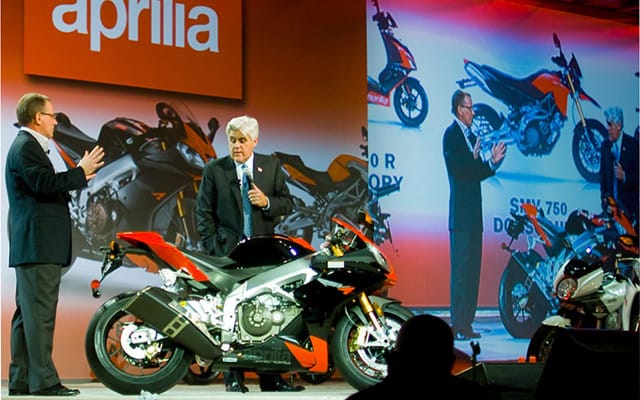 Just released by Piaggio Group Americas is the news that talk show host Jay Leno was on hand  back in October to entertain their dealers during the company’s 2009 national  meeting in Carlsbad, CA. The celebrity motorcycle enthusiast helped present the 2010 model lineup starring Aprilia’s RSV4 Factory, Aprilia RSV4 R and 850 Mana GT ABS. Other new scooters and motorcycles introduced included, the Vespa GTS 300, the LX 50 four valve and the new fuel-injected engines on the 150cc versions of the Vespa LX, S and LXV, the Moto Guzzi Stelvio 1200 ABS, and the Moto Guzzi V7 Café Classic.

No word on whether the Italian moto-scooter conglomerate will bring out Brent Butt or Ron James to unveil the Aprilia superbikes at the Toronto Motorcycle show this weekend. In fact it’s currently difficult for Canadians to get any information about Aprilia and Moto Guzzi motorcycles, or Piaggio and Vespa scooters. Piaggio Group Americas Inc. terminated its exclusive distribution agreement with Canadian Scooter Corp. in November and is asking customers and dealers to now contact them directly via email at CanadaCare@piaggiogroupusa.com. French-speaking customers and dealers are asked for “patience and understanding” until French-language support is arranged.

Check out the January issue of Cycle Canada (on news stands now) for the complete story.