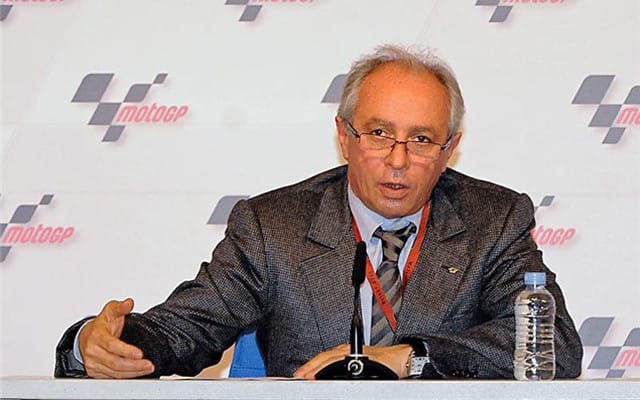 Vito Ippolito president of the FIM, motorcycle racing’s governing body, says 1000cc engines are the future for MotoGP, and denies it leading to conflict with the World Superbike Championship.

Earlier this year Carmelo Ezpeleta, the MotoGP rights holder had proposed using production-based 1000cc engines from 2012 onward, and it now seems likely a modified version of this plan will be adopted, where production-derived engines would be eligible but not mandatory.

Ippolito believes that moving back to a 1000cc motor will be welcomed by the MotoGP teams, since the change from 990cc to 800cc engines in 2007 hasn’t produced the desired effect of lower costs and reduced cornering speeds.

“The 800cc formula hasn’t worked because power is more or less the same [as 990cc], but cornering speed has increased. And costs have increased too.”

In response to superbike promoter Infront Motor Sports angry reaction to Ezpeleta’s initial suggestion of a 1000cc MotoGP formula, Ippolito says even if some of the engines had production origins, MotoGP bikes would remain prototype racing machines, thus creating adequate separation between the two series.

“The difference is the rule about homologation: a bike is or isn’t homologable,” Ippolito explained. “The discussion starts and ends here. It doesn’t matter whether the engine is 1000, 1200, or 750cc – MotoGP can’t be homologated, so it can have whatever engine it wants, since the discriminating factor is another one.”

Ippolito also feels the two racing series cater for different audiences and will be able happily co-exist whatever regulations are in place.

“We are satisfied with both series, because they meet the requests of the fans,” said Ippolito. “SBK offers the opportunity of racing and showing off to people who have less resources, while MotoGP is the global image of motorcycle racing.