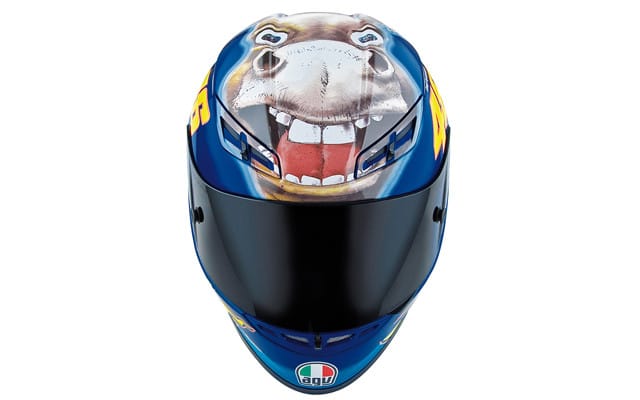 There’s a lot to admire about 2009 MotoGP champion Valentino Rossi, not the least of which is his zany, self-deprecating sense of humour. Imagine how much more interesting the likeable but bland Wayne Gretzky would have been if he’d had some of Rossi’s verve.

Apparently Valentinos’ first thought after crashing at the Indianapolis MotoGP was “what a donkey.” His thought was translated into a new helmet graphic for the next round at San Marino. In self-mocking celebration of his fall, the Doctor became the Donkey.

Thanks to headgear manufacturer AGV you can now be a donkey too. As with Rossi’s renowned ‘Face’ helmet, the Italian outfit is making a limited edition Rossi ‘Donkey’ available in its premium GP Tech line.

The helmet has a huge donkey on top (with Valentino’s eyes says AGV) “THE DONKEY” on the back in the familiar “doctor” script, also the words “EL SUMÈR” (the donkey in the local dialect of Rossi’s home town of Tavullia). The helmet also features the familiar sun and moon images on the chin bar, a “46” on the sides, and on the back Rossi’s two dogs Cesare and Cecilia wearing donkey hats.

Here are the specs.

• Cheekpads and linings interchangeable to allow for a perfect custom fit.

• Ready for Racing Kit Visor (permanent fixing of visor to base plates).

• Removable and washable neckroll with a Scotchlite® reflective panel built in.

The ‘Donkey’ will be available as of January 2010. Pricing is not yet available but will most likely be in the range of $900. AGV products can be ordered in Canada from their website.