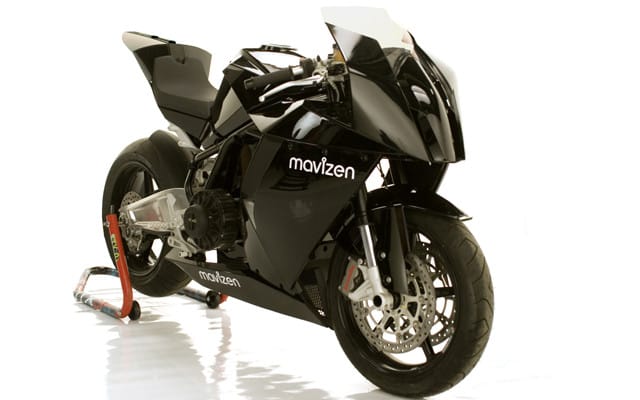 Has your commitment to reducing greenhouse gases kept you from realizing your life long dream of starting your own motorcycle racing team? Well for a mere $40,000 USD eco friendly entrepreneur Azhar Hussain, founder of the zero emissions motorcycle company Mavizen and the TTxGP eGrandPrix, can help make your dream come true, with his limited-edition competition-caliber electric superbike, the TTX02.

Unveiled in Las Vegas yesterday at SEMA, the Mavizen TTX02 is powered by pair of Agni 95 electric motors, each producing 22.5 kilowatts continuous power (about 30 horsepower) and 36 kilowatts peak (48.2 horsepower), claiming a top speed of 209 kph. Billed as “a laptop on wheels”,  each TTX02 comes with dedicated IP access, on-board web server, and connectivity to a wifi network, allowing for remote diagnostics and fettling.

”By building on the open standards of the internet and the PC, we unlock the creativity and lower the costs of innovation for teams, enthusiasts and riders. TTX02 is a development platform that invites the potential for success previously seen in electronic hardware and software, into the automotive industry. We need to pick up the pace of innovation and make it real fast; TTX02 is a key marker in that journey” says Hussain.

A choice of three lithium-ion battery packs will be available for the e-racer, each developed specifically for one of the TTXGP’s three racing classes. The largest pack, the Snaefell, is an 11 kilowatt-hour unit designed for the 61 kilometer Isle of Man TT course, while the 6 kilowatt-hour Circuit pack is for the 40 kilometer course and a smaller “Sprint” pack is being developed for the eGrandprix’s 10 kilometer course.

If you’re thinking the TTX02 looks a lot like the KTM RC8 its because, except for the motor, it is. The chassis is supplied by the Austrian manufacturer and with chrome-moly trellis frame and WP suspension to the Brembo brakes, cast aluminum wheels and slick bodywork, is exactly as you’d find it in one of their showrooms.

Speaking of KTM, Cycle Canada editor Neil Graham will be at their 2010 model press launch tomorrow where they’ll be unveiling their new 1190 RC8R and the 990 Super Moto T for North America. Look for his first ride impressions here next week.