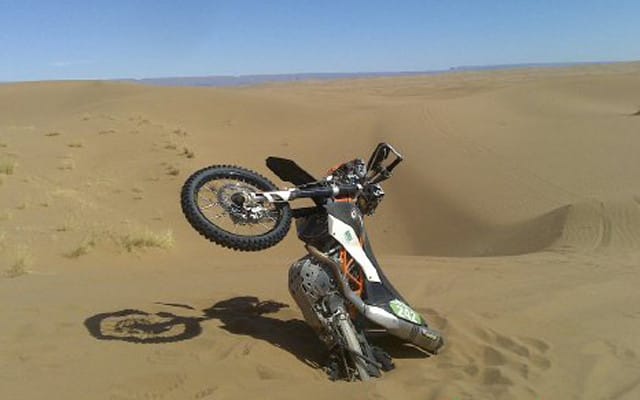 British Columbian Don Hatton, riding a KTM 690 Enduro, placed fourth in the Enduro class at the 2009 Rally of Morocco while Frenchman Antoine Didier won the event on his KTM 450 EXC.

“I was a little caught off guard by the heat in stage 2. However after a short rest in the desert I recovered enough to finish well that day. After that I wore a few less Items of clothing”, said Hatton.

“I am not disappointed with my finish in anyway, I had to really dig in and work to achieve what I did, my navigation went very well. I did make a couple of minor navigation errors but nothing serious, my only real problem in the rally was the limits created by the lack of suspension on the stock KTM690 Enduro. I believe with better suspension I could have won my category. The 690 Enduro is a good bike, but the thing that most people don’t know about it is that in order to get a lower seat height on it, they [KTM] simply cut back on the suspension travel 25% to only 8 – 9 inches of stroke.”

“In any case I did finish and finished in a respectable position.”

Next up for Hatton is the Dakar rally.