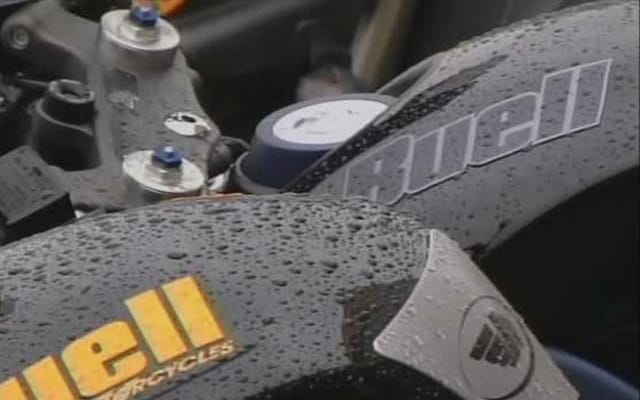 Last week we told you about a group of Wisconsin businessmen banding together to try and save the Buell Motorcycle Company. No further word on their progress, but things don’t look promising. It’s been announced that the last Buell motorcycle will be made on Friday, October 30, 2009 and that no one will be employed at the factory after December 18th.

In a show of solidarity, approximately 100 Buell enthusiasts from as far away as Alaska made a rainy pilgrimage to the East Troy plant on Monday to show their support of the brand, and ultimately pay their final respects (see video below).

“To let this die without at least a whimper of protest seems just wrong. I think we should at least stand up and say, “We do not approve,” said Buell rider Bill Stachour.

“We’re upset with what Harley-Davidson Motor Company has done. They’ve pulled the rug out from under our feet as customers and fans, as well as the employees and Erik Buell himself,” enthusiast Jason Katch said.

When asked whether there was a chance of Buell continuing on under new ownership, Harley-Davidson spokeswoman Pat Sweeney said, “We chose not to sell Buell, and simply end production, simply because of the interdependencies that exist between Buell and Harley-Davidson. That is the decision we made, and that is not a reversible decision.”

Apparently US dealers are unloading their Buell stock at fire sale prices. No such luck in Canada as of yet.