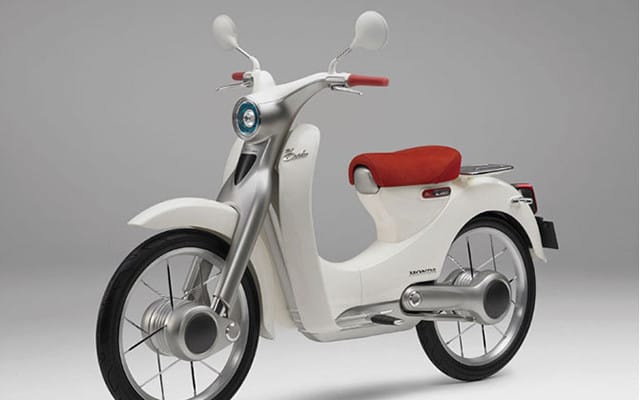 Branded by a surprising number of people as the world’s greatest motorcycle(see video below),the 50cc kick-start Honda Super Cub — with just four horsepower and a top speed of 80 kph (50 mph) — is considered the single most successful vehicle in the history of internal combustion. Debuting in 1958 under the slogan, “You meet the nicest people on a Honda” the manufacturer has sold more than 60 million of the machines worldwide, but now after all that time, the Cub is going electric.

Honda unveiled the EV-Cub at the Tokyo Motor Show yesterday and didn’t provide many details but said the concept is designed “to be just as functional and convenient as its world famous predecessor.” Already incredibly fuel efficient, with a claimed rating of 282 miles per gallon, changing the infallibly simple motorcycle to run on batteries, could be a gamble for Honda. Only a solar powered unit would seem more efficient. But in an effort to be ‘green positive,’ we’re hoping the updated Cub gets a better response than Dylan did when he went electric.