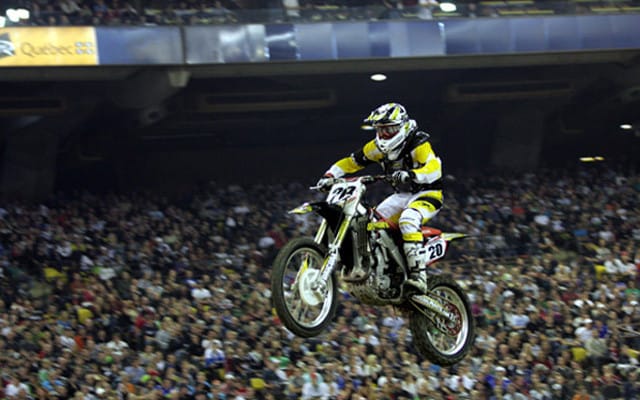 More than 45,000 fans witnessed Suzuki rider Jason Thomas of Melrose, Florida  runaway MX1 win over Canadian champion Colton Facciotti at the Montreal Supercross, this past Saturday night at the Olympic Stadium. Third place went to another Canadian, Dusty Klatt from Campbel River, BC.

“The start was going to be everything tonight because the track was wet and passing minimal,” said the two-time Montreal race winner Thomas. “I focused on the drop of the gate and made a quick start and ran away.”

The first final of the evening, in the MX2 class, was an all-Canadian affair with Kyle Beaton (Yamaha) from Surrey, BC winning ahead of Quebec Kawasaki rider Kaven Benoit and Brady Sheren, also from Surrey.

Endurocross made its debut at the Montreal event this year with local favourite Guy Giroux of St-Jérôme, QC finishing third overall behind winner Komel Nemeth from Kamloops, BC and John Dowd from Ludlow, MA.

In the Freestyle competition Swiss Matt Rebeaud walked away with the win after performing his patented move. “We had some serious competition tonight,” said local favourite Ben Milot. “As soon as Rebeaud made his Backflip Superman, everybody’s night was done. He is one step ahead of everyone. We had fun and the crowd loved our show.”