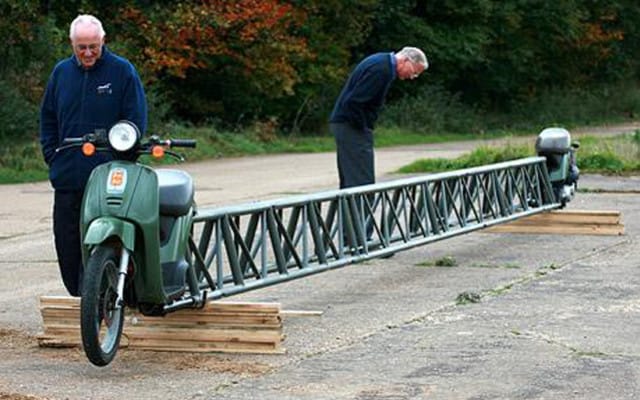 Colin Furze, a plumber from  from Stamford, Lincs, UK has entered the new Guinness Book of Records for building the world’s longest motorbike.  Measuring 14.03 metres long, it beats the previous record by 4.3 metres.

Furze says he undertook the endeavour to celebrate his 29th birthday and spent two months creating the 46 ft motorbike, using two cannibalized 50 cc Honda Sky mopeds and a frame extension that he fabricated out of aluminium.

He claims his creation tops out at 50 kph and that, “You can ride it like a normal motorbike but steering is a bit of a problem as it has just a small turning circle. It is quite heavy and difficult to handle and it would be hard to ride on the roads as you need about six widths of road to turn.”

Furze, who also holds the record for the world’s largest bonfire in 2007, drove the bike 100 metres on an airfield to make it into the record books. He put a film of his ride on YouTube and sent the video along with signed statements to Guinness.

He’s now building a new motorbike that will be almost double the length.