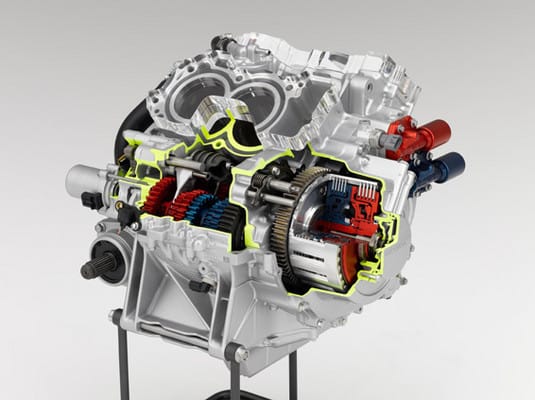 Honda is set to release a transmission that it claims is the world’s first fully automatic dual clutch transmission for large-displacement sportbikes.

The so-called Dual Clutch transmission has three operating modes: two fully automatic settings (D mode for regular operation and S mode for sport) as well as a six-speed manual mode, which delivers, they claim, the same shifting sensation as a manual transmission. Honda also claims that fuel economy is as good with the new gearbox as with a traditional transmission.

The new transmission employs two independent clutches, one for the odd gears (1st, 3rd, 5th) and one for the even gears (2nd, 4th, 6th). For example, when changing from 1st to 2nd gear, the computer detects the up-shift and engages 2nd gear, then releases the 1st-gear clutch while engaging the 2nd-gear clutch to achieve a gear change.

According to Honda, the new transmission’s compact design allows it to be coupled to existing engines without substantial layout modification, and it will be used primarily on large-displacement bikes destined for use in developed countries. We assume that means Canada. The first bike to use the gearbox will be the long-rumoured VFR1200, set for a 2010 release.