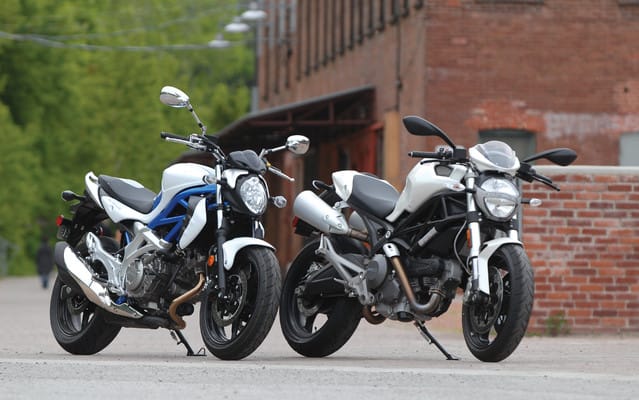 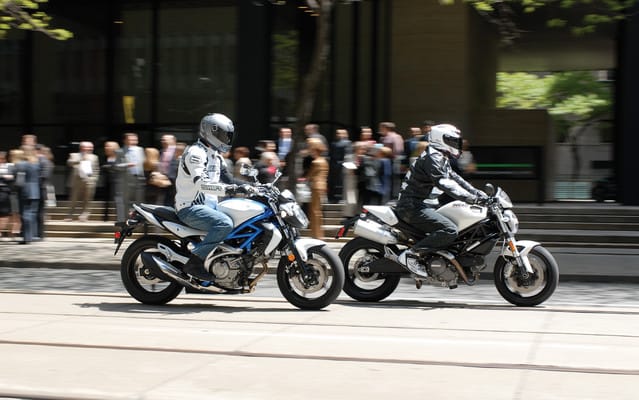 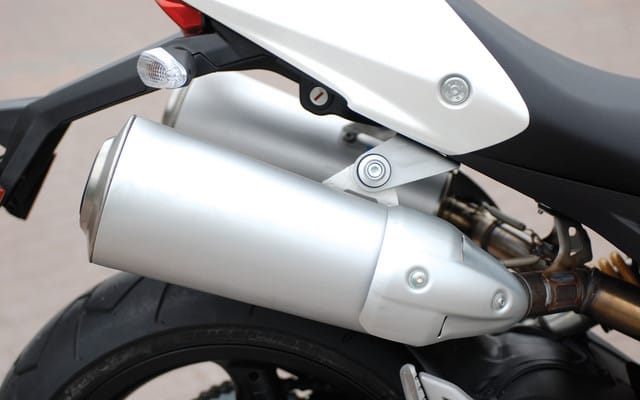 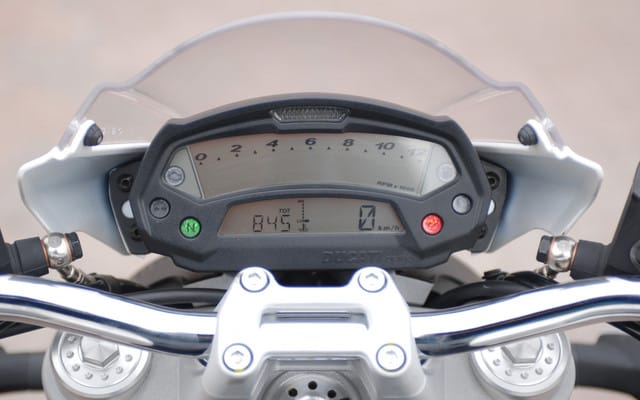 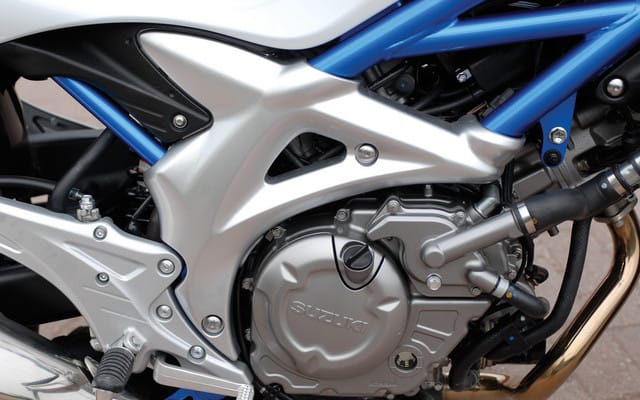 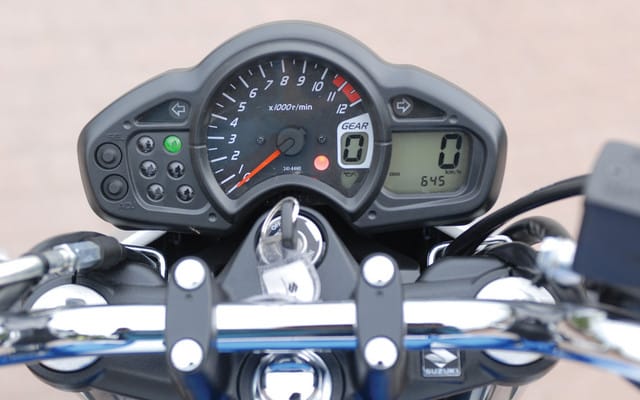 Ducati’s Monster has been a success for over 15 years, and Suzuki sat up and took notice. But is its Gladius a stunning design or proof of a lack of imagination?

“How can they do that?” asked the man in the parking lot at the coffee shop. Do what? “Make the Ducati look so much like the Suzuki.” We asked if he was a motorcyclist. He said no, not really. We suspected as much. But it raised an interesting question. (Well, interesting in the context of a motorcycle review, perhaps.) If you don’t know which bike came first, does it even matter if someone is copying someone else’s bike?

When pictures of Suzuki’s Gladius first surfaced, we had an awkward moment with a Suzuki dealer that we happened to be talking with. “What do you think of the new bike?” he asked. We tried to bite our tongues but we couldn’t. “You mean the one that looks like the Ducati Monster?” Now here is where brand loyalty blinds one to reality. “It looks nothing like a Monster,” the dealer said. We smiled. He didn’t smile. He called us snobs. We stopped smiling. Our conversation was over.

Since it was introduced 250 years ago, the Monster has been Ducati’s bread-and-butter model, the one bike that Ducati hasn’t been able to screw up. They may have flirted with disaster with the unloved 999 superbike and the peculiar Multistrada, but the Monster has soldered on. Even though the 696 is a completely new Monster, it draws inspiration directly from its predecessor—even Italians know that profits must be made for bills to be paid.

The Gladius derives from Suzuki’s long-running SV650, a stellar knock-about machine good for most everything from club racing to commuting. The Gladius is Suzuki’s attempt to make a stylish bike that you would buy on looks alone, something that could never be said for the bland SV. But something odd happens when engineering-driven Japanese manufacturers suddenly decide to become stylish—and this is especially true with Suzuki. When Suzuki concentrates on the “go,” they build furiously fast motorcycles—the GSX-R range practically invented the modern superbike. But when Suzuki becomes concerned with issues of style they take off in peculiar directions. Witness the B-King, and the M90 cruiser tested in this issue. While we appreciate fresh design, we’re not sure exactly what to make of some of its styling sensibilities. The Gladius mostly avoids the excesses of the aforementioned models, but once we got our tester back to the office and started poking around it we came across a faux pas too glaring to overlook. That lovely aluminum frame section just above the engine that fuses with the steel trellis frame that runs to the headstock is not what it first appears to be. It’s plastic. They used a plastic frame cover.

You may accuse us of over-reacting, but Japanese manufacturers should pull together and form an advisory board to stop each other from using unnecessary plastic covers. It is one thing to discreetly cover a battery, but something else entirely to cover a frame. The forward section of the frame is stylish and painted attention-grabbing blue, and they have nothing to be ashamed of—so shame on them. What makes it especially tacky is that the Monster actually has a frame that combines a central aluminum section to a forward reaching steel trellis component. So while the Suzuki pretends the Ducati delivers. How embarrassing.

One would assume that the overt similarities between the two machines would result in similar motorcycles. But the Gladius and Monster are dramatically different. The Ducati, perhaps unsurprisingly, is the more visceral motorcycle. Its air-cooled engine clatters more than the Suzuki’s water-cooled mill, even though at similar road speeds in the identical gear the absurdly tall-geared Ducati is turning 1,000 rpm less. (We’re reminded of words spoken by a Ducati engineer: “We gear for maximum top speed,” he said, when asked why a different Monster was similarly geared; helpful information indeed. The truth is that to meet noise requirements—that are measured while the machine is at speed—it is necessary to quiet the noisy engine by shedding revs.)

Predictably, the riding positions also differ. The Ducati has a flat handlebar that requires more of a cant forward, making it the better machine on the highway, as the Suzuki’s upright tubular handlebar puts the rider a little too upright. Ideally, both machines would have a ’bar midway between the two positions. Perhaps as a concession to allow short-legged riders an easier reach to the ground, the Suzuki’s seat is heavily sculpted near the tank, making it considerably less comfortable than the Ducati’s broad—yet equally hard—perch.

At the 696’s launch last spring in Barcelona, Ducati admitted that past entry-level models in its range had been hobbled by inexpensive braking and suspension components. The 696, they claimed, made amends for this oversight. And comparing the details of the Gladius to the 696 it is advantage Ducati. Where the Ducati’s handlebar and triple clamp look as though they could have come from an up-range model, the Gladius has a top triple clamp that looks like it came from a ’70s GS—retro, in other words, but not in a good way. Suspension components on the Gladius are extremely softly sprung, and at even a moderately sporting pace it wallows excessively, while the Ducati, as Ducati’s often are, has very firm suspension settings. Just as in the issue of handlebar height, the best compromise for general street use would be halfway between the two machines.

Even though the harder-edged engine of the Ducati gave the impression of having more vigorous performance, only a fool would underestimate a Suzuki’s zip. The 645 cc V-twin in the Gladius is the model of Asian sophistication. Smooth and quiet, it runs hard to redline. For comparisons, we like to test performance by rolling on the throttle with both machines travelling at the same speed in the same gear, but the Ducati’s too-tall gearing meant that it was always left for dead. Dropping a gear on the Ducati matched the revs between the two bikes and resulted in identical acceleration.

Even though it has a slight displacement advantage, the two-valve, air-cooled Ducati could run with the Suzuki. Impressive, especially considering that when we picked up the 696 we had trouble even starting it. Every morning we’d fiddle with the fast idle lever and crank it for ten minutes before we could make it go. Returning the bike to Paul Hewitt at Ducati Toronto, he had master spanner-spinner Chris McDermott solve our woes. It turns out that fuel injection is pre-set at the factory (“pre-set not to work?” quipped a staffer) but after fettling the low speed mixture the problem was solved. The Suzuki, of course, could be beaten with a hammer and not show any ill-effects. Oh, when will the Japanese learn to infuse its motorcycles with more character? If only the Gladius hiccupped, or farted, or leaked oil, or didn’t start we’d be swooning over it. It just isn’t fair.

What is truly astonishing (well, astonishing in the context of a motorcycle review) is that the differences in these motorcycles makes you ride them in dramatically different ways. While we flailed the Ducati mercilessly, we rode the Suzuki like we actually wanted to keep the privilege of riding on public roads.

Choosing between the two, if these things were rationally reasoned, would mean that we’d all buy the Suzuki, as it suits the riding that most of us actually do. (This is the place where tests normally say that if you want to blitz back roads buy the Ducati, but will anyone do that on this bike? It’s unlikely.) Decisions about motorcycles are rarely rational. That the Ducati suits the riding that we would rather be doing makes it appeal to the infantile in all of us—even if, just like everyone else, we’re stuck trolling along in traffic.

A reasonable premise for a comparison test is that a winner be crowned. Yet even similar motorcycles are built to satisfy the needs of very different users. And since both of these motorcycles outperforms the other within its area of specialty, judging criteria slides down the slippery slope to personal preference. The sensible rider in me needs the Gladius; it performed flawlessly, was stupidly easy to ride and accelerated as fast as the Monster. As a daily ride it could do no wrong, and with suspension fettling and better tires I’d even take it to the track. Yet there was something flaccid in its bright blue frame and wheezy exhaust note. If only because Graham holds them in high regard, I wanted to dislike the Ducati, and there was cause to pan it: It wouldn’t start and it made a horrendous commuter. Resembling the Latin temperament, the Ducati thought it could only be heard when screaming at the top of its lungs. Which of course is when it worked best. I might need the Suzuki, but I want the Ducati.
–Uwe Wachtendorf

As a highly skilled expert in everything and all things, I found the Suzuki lacking. It didn’t do any of the things that allowed me to exercise my expertise. It started, it was smooth, it was fast and it was easy to ride. Boring. The Ducati, on the other hand, needed me to fiddle with it for ten minutes to start it. Not everyone could do that. Only I could do that. Once it was fixed I didn’t like it as much. Anyone could ride it then. My advantage was lost. We all know that the Suzuki is the better choice—you didn’t need to read the review to know that—but as a motorcyclist it left me a little cold. Sure it’s more practical, but since when have I been practical: I’ll take the Ducati.
–Neil Graham