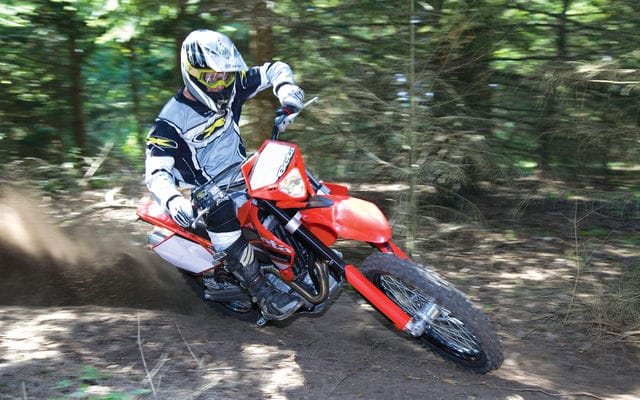 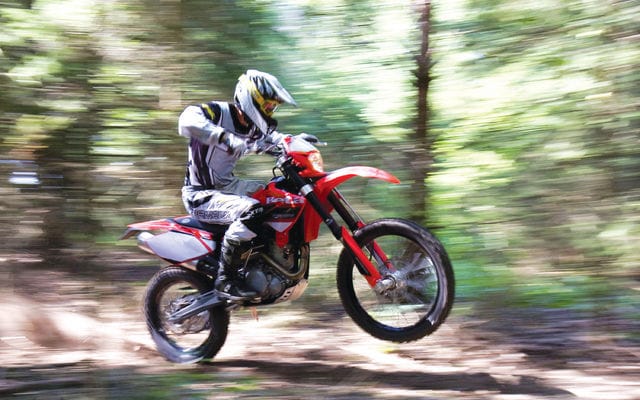 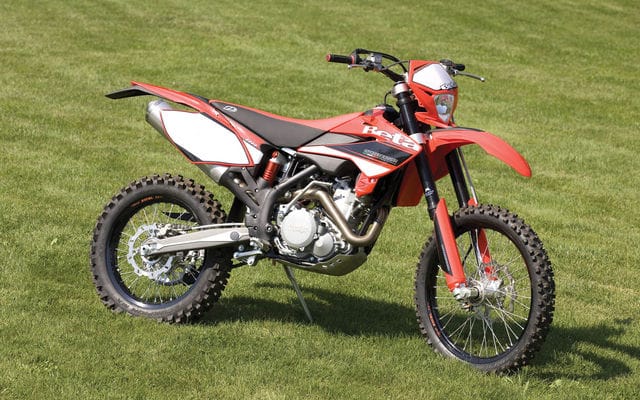 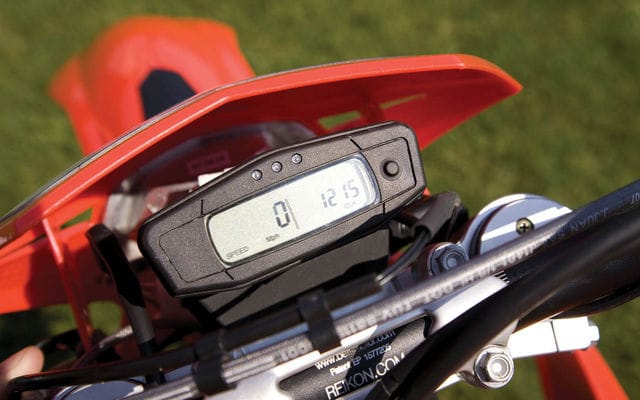 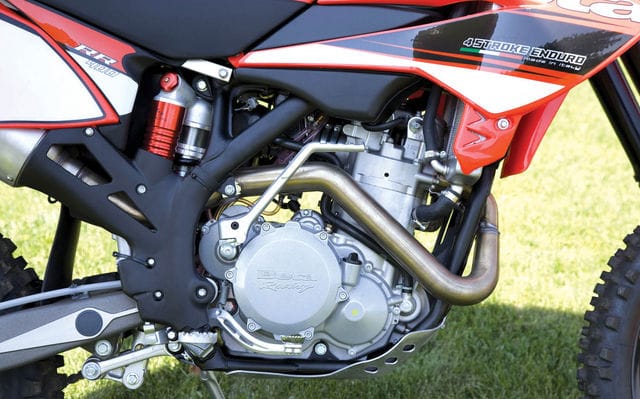 You can trust the Italians to produce something unusual. Lawrence Hacking rides the KTM-powered Beta.

Unless you are a hard-core trials aficionado it is possible that you have not heard of Italian motorcycle brand Beta. In recent years Beta has branched out into the enduro world and has produced an exceptional off-road motorcycle. Beta enduro bikes are not new, and have been around since 2007 in the European market. The Canadian Beta distributor, Mountain Motorcycles of Coquitlam, B.C., offers the line through 14 dealers across the country. Beta enduro bikes come in three engine capacities: 400 cc, 450 cc and 525 cc, but unfortunately street-legal RS dual sport versions are only sold in the U.S. at this time.

For our test I rode a 2008 400RR, but the differences in the ’09 model are simply the colour of the plastic bodywork, which is now white with revised graphics. Two distinct features make the Beta unusual. The liquid-cooled, four-valve single is made in Austria by KTM, but it is not the engine that KTM uses in its own bikes. The Beta uses the older-style RFS (which means Racing Four Stroke in KTM-speak) engine that KTM used from the 1999 to the 2007 model year. The lineage of this engine is unusual. When KTM acquired Husaberg it was mainly to get Husaberg’s engine design, and soon after the purchase a suspiciously similar looking engine appeared in KTM’s motorcycles, replacing the vibratory and unreliable LC4 series of engines.

The overall simplicity of the RFS motor is one of its greatest strengths. The Keihin FCR39 carburetor, for instance, is used on just about every brand of off-road motorcycle and parts are available at just about every shop in the country. And although carburetion is somewhat old school these days, if the Beta becomes stuck in a creek it is easy to dry it out and get it running again. Its exhaust system is well designed and quiet, and mates a stainless steel header pipe with an aluminum muffler. A titanium muffler is available as an option.

Beta uses a cast aluminum tapered swingarm and both front and rear axles are of large diameter to reduce flex. The rear suspension linkage has a familiar look to it: the multi-link set up it uses is found on just about every brand of off-road motorcycle on the market. The rear suspension uses a Sachs single rear shock and works well in a wide range of enduro conditions. Sachs shocks are also found on Husqvarna’s enduro motorcycles. The rear suspension worked well without adjustment right out of the crate, and the stock settings allowed the tire to follow bumpy surfaces under acceleration and braking. The plastic chain guide is well thought out and has obviously been designed by someone who has had to put up with the frustration of a derailed chain because of an ill-conceived guide.

The 45 mm Marzocchi fork is also popular and similar units are fitted to Gas Gas, Husqvarna, and BMW’s G450X enduro. Without being overly sophisticated, the Marzocchi offers good quality damping, decent feedback, and ample travel. Another positive is the number of shops familiar with Marzocchi equipment, which will aid servicing. Holding the fork in place are exotic-looking triple clamps with an appealing machined finish. The Beta has perhaps the most incredible brakes available on an enduro bike today. The use of Japanese Nissin hydraulic components, including front and rear master cylinders, means you can drop into any Honda dealer and order parts including original equipment brake pads. On the trail they feel strong, progressive, and consistently firm, and they seem to be unfazed by water crossings. The Braking wave rotors are thick, cauliflower-shaped pieces that are visually impressive and dispel heat quickly.

A chrome-moly oval-tube, semi-perimeter frame is coated with a rugged semigloss black finish. The Beta’s chassis is ultrasolid feeling and the aluminum subframe, while looking a little cobbled together, is well designed. Bodywork is similar to that typically found on trials bikes, and is of a very pliable rubber-like plastic that can be twisted around itself and will spring back to its original shape. The air box draws its charge from behind the seat through a screened opening in the rear fender, probably the highest, driest, and cleanest place for an air intake. Removing two eight-mm bolts and then swinging the battery out of the way accesses the air filter. Beta uses large-volume oiled foam Twin Air filters and the air box has ample room to remove and replace the filter.

Fuel capacity for the 400RR is 8.47 litres for a range of over 100 kilometres. The dry weight, at 122 kg, is comparable to most other bikes of similar capacity. The hydraulic clutch uses an AGP master cylinder and lever combination that is typically found on trials bikes. Clutch pull is one finger light and easy to modulate. The seat position is high, the handlebar falls nicely under the rider’s hands, and overall the riding position is spacious and comfortable. Foot pegs are steel and clear of mud easily. Most off-road motorcycle seats are firm, but the Beta’s is extremely firm and very narrow. On the 21-inch front and 18-inch rear wheel come top-shelf Pirelli Scorpion tires that provide excellent traction in a wide range of terrain. The Japanese-made Excel rims look striking in black anodizing.

Attention to detail on the Beta is impressive: the plastic headlight unit blends nicely into the lines of the front fender and the light itself meets European standards—which means that output is very strong. An easy-to-read digital dashboard has a wide range of function. It will display speed in either miles per hour or kilometres per hour, in addition to an engine hour meter, lap timer, clock and odometer—all useful features on an enduro bike. Riding the Beta is fun, and easy—within a few minutes I was comfortable. The 400 cc engine is an excellent size for an enduro: the power delivery is controllable even when you’re tired, and the smooth surge of acceleration does not wear the rider out prematurely. The engine has great low-end punch and a nice flywheel effect, the carburetion is spot-on and the electric starting was hassle-free (back-up starting is by kick).

The six-speed transmission shifts smoothly, and it is purposely difficult to find neutral when the bike is running so that false neutrals are avoided. A blend of Italian, Austrian, and Japanese components makes a motorcycle that exudes quality. The 400RR doesn’t perform like a typical European bike: it is not as hard edged and does not require a complex setup to make it work well. Handling is crisp and precise, turning is sharp, and the narrowness of the bike makes it a machine with no bad habits. The Beta is a rare bird, one of only a few in Canada at the time of our test. If you like riding a motorcycle you don’t see every day the Beta may be for you. If you want a bike that does the job well, has no undue quirks and can help you realize your full potential as an enduro rider, you’d Beta put one on your shopping list.