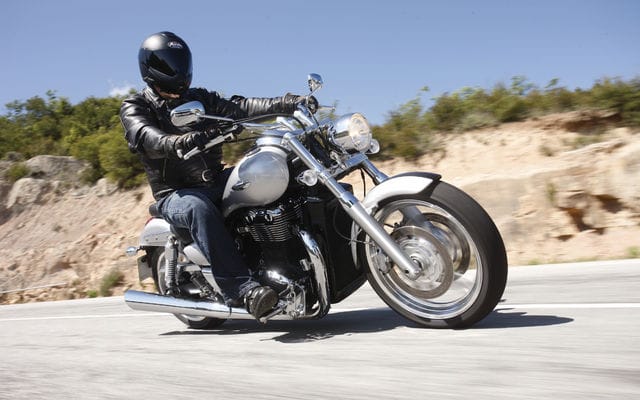 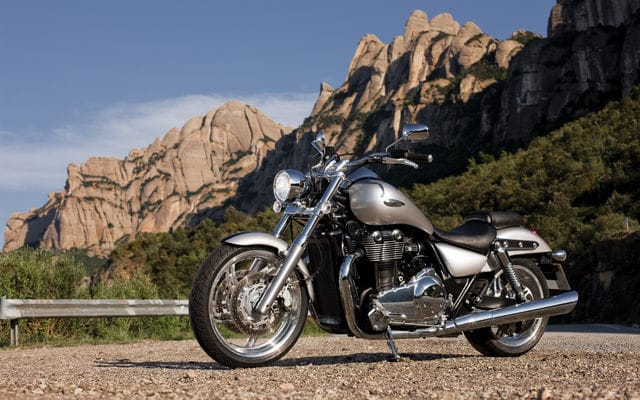 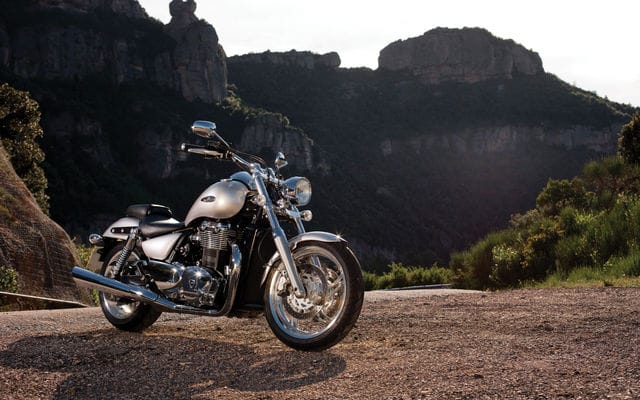 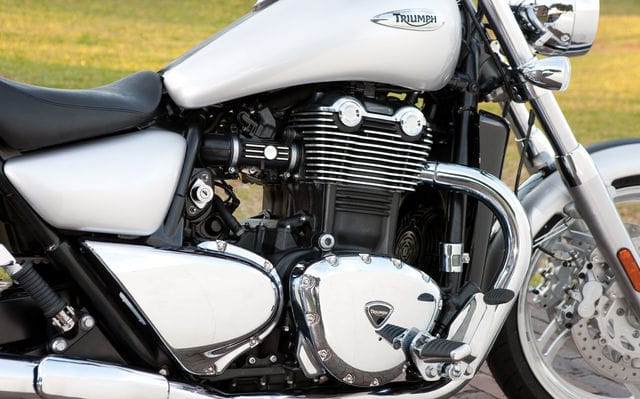 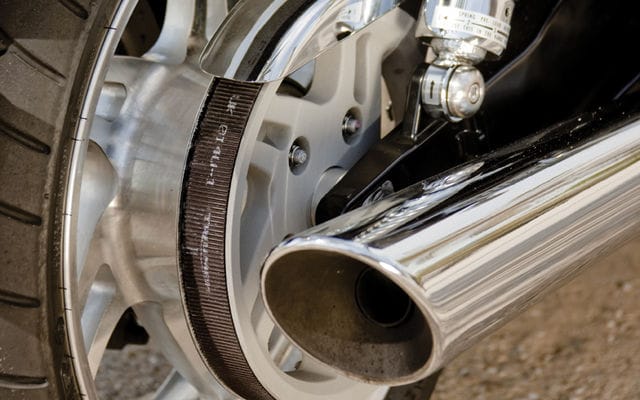 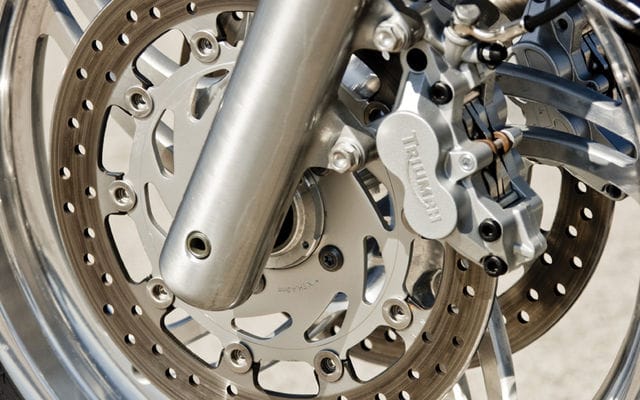 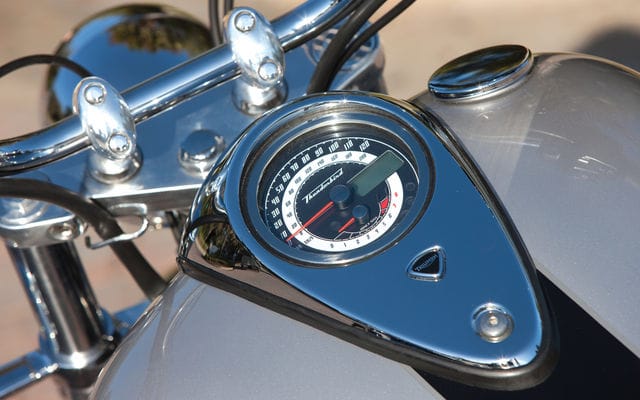 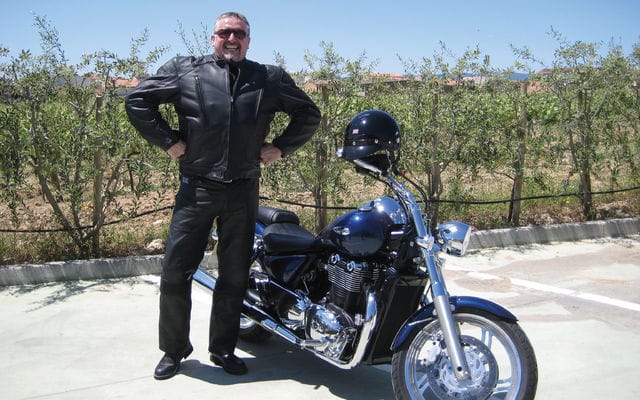 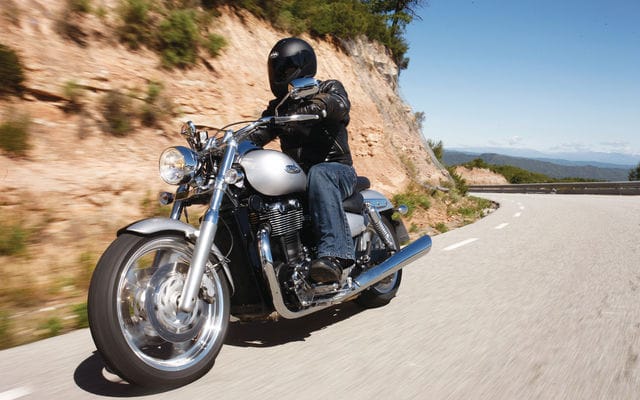 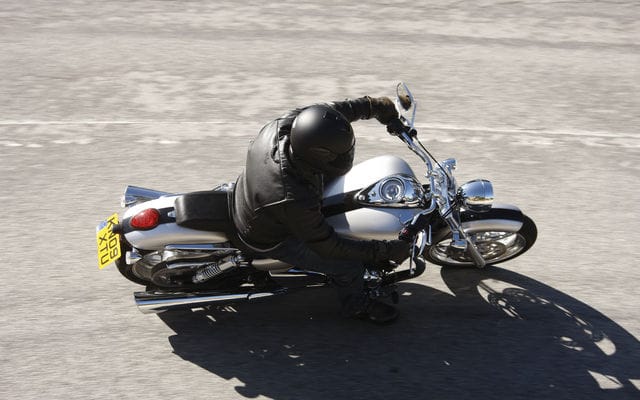 Triumph aims for mainstream America with a conservatively styled cruiser stuffed with a big bore engine. But is it going to be enough?

At a mid-morning coffee break I watch two men move from bike to bike carrying a small plastic bag. Curious, I approach hoping for an answer to the mysterious maintenance regimen they’re -performing. Realizing that the bag is full of hero blobs, I flip up the footpeg on my Thunderbird and am surprised to find the slider ground down to its mounting nut—and we’ve only been on the road a few hours. The Thunderbird, it seems, is a real flyer.

Despite the downturn in the world’s economy, 2009 will prove to be a milestone year for Triumph, as they project record sales of 50,000 motorcycles. They also claim to be the world’s fastest growing motorcycle company, but to maintain the momentum they will need to break new ground, which is why the Thunderbird comes at a critical time. The vast popularity of the cruiser segment is unmined territory, and they need an increased cruiser presence to continue their upward climb.

Triumph admits they will launch many new models soon and, if I had to guess, it is likely many variants will be based around the Thunderbird. The 1,597 cc cruiser plugs a gap in Triumph’s fleet between the Rocket III battleship and the lightly armed Speedmaster and America.

This is a cruiser built for American sensibilities, and it was critical that Triumph get it right. Los Angeles designer Tim Prentice sculpted the lines for the Thunderbird and claims that goals for his design were a “straightforward, honest and mechanical” motorcycle, with “a strong stance with muscular proportions.” One look confirms his success, but it’s also something else: bland. Were it not for its most distinctive feature, the all-new T-16 parallel-twin engine, it would be lost in a sea of look-alike cruisers. But this conservatism—unusual in a risk-taking company like Triumph—is intentional: you don’t conquer Middle America with a cruiser that looks like the Rocket III—that much they’ve learned.

Mechanically there is absolutely nothing bland about this bike. Clearly, Triumph went to great lengths to get the beast just right, as Warburton explains, “A sportbike is easy—you can develop the engine on a dyno—it’s a challenge of chasing horsepower and revs. Developing a cruiser motor isn’t as easy as people think. The Thunderbird could easily have had more horsepower and torque, but it wouldn’t have the right feel. Designing it was about chasing character.” And what character it has.

Triumph was to have introduced the Thunderbird a year ago, but the launch was delayed when Harley-Davidson introduced its new six-speed transmission. Knowing that the Thunderbird needed to compete with Harley, Triumph shelved the five-speed and designed a replacement six-speed transmission. That Harley-Davidson is a target is no surprise; any manufacturer wanting a share of the cruiser pot-of-gold will need to peck away at Goliath’s market share. But Warburton remains realistic: “We’re not going to take the cruiser market by storm. We’re not going to dislodge Harley anytime soon—probably never.”

It’s a good thing then that Triumph has its own heritage to work from. The Thunderbird name has popped in and out of its model range since the 1951 6T, and the latest bird is the biggest parallel-twin ever, and brazenly counters the traditional use of a V-twin in a cruiser. Using double-overhead camshafts with four valves and twin spark plugs per cylinder, the engine’s 270-degree crankshaft replicates the cadence of a V-twin. Balance shafts fore and aft of the crank calm unwanted vibration.

The primal interconnection doesn’t end there. The Thunderbird also sounds good, even with the stock pipes. While the parallel twin doesn’t have the I’m-about-to-stall rumble of a V-twin at idle, as revs increase to a working speed it closely resembles the rumble of a V-twin. One of the test bikes is fitted with accessory mufflers ($540). At a stop light one of our group blips his throttle, and though I enjoy the racket, those around us in cars seem irritated..

It is exactly this antisocial behaviour that the bike wrings out of you. The base Thunderbird has the attitude of a lout in your corner pub—bristling with energy and raring to go. But even worse, the big bore kit-endowed model is a raging soccer hooligan. Stock, Triumph claims 85 horsepower at 4,850 rpm and 108 lb-ft of torque at 2,750 rpm. The big bore kit bumps displacement to 1,700 cc and claims to add 15 horsepower and 7 lb-ft of torque. Included in the $1,080 kit are revised camshafts, pistons, cylinder liners and clutch springs, and to make sure that there isn’t any mistaking a hopped-up version for the stocker, there’s an embossed “104 Cubic Inches” clutch cover. The cost doesn’t include the 10 to 12 hours of labour for a dealer to install the kit.

Contributing to the machine’s performance is ECU monitoring of how quickly the throttle is opened, information used to decide which of two fuel maps will be automatically employed by the two 42 mm throttle bodies. Triumph calls the two modes “sport” and “cruise,” and although its purpose is to match engine output with a rider’s intent, it’s also claimed to improve fuel economy.

With the exception of first gear, the six-speed gearbox uses helically cut gears to reduce mechanical noise and drive-train lash. Gear changes are smooth and the cable-operated clutch is light and only fatiguing in endless stop-and-go traffic. Top gear acts as a useful overdrive at realistic highway speeds, transforming the steady thumping of the engine into the passive throb of a heartbeat. Delivering power to the rear wheel is a belt, something not seen on a Triumph since the 1920s Model H.

Triumph had set a goal to make the Thunderbird handle in a precise and neutral manner, and that’s exactly what it does. Initial turn-in requires the effort that you would associate with a 339 kg (746 lb) machine, but it is easily done with the leverage from the wide handlebar. Once banked the bike holds a line easily, requiring only minor pressure to alter the direction of travel. This cruiser is a doddle to manoeuvre through a hairpin, remaining stable as you grind away its pegs, and its limited ground clearance is the only detriment to handling.

Both suspension and tires were designed in conjunction with the component suppliers. A Showa 47 mm fork is nonadjustable while the rear suspension is adjustable only for preload, which at its lowest setting is rated for an 85 kg (187 lb) rider. The ride is plush over road irregularities yet firm enough during hard turning or braking. To be fair, these roads have little in common with those found in the Great White North, and it’s not until the Thunderbird is ridden down a stretch of pot-holed Canadian tarmac that this assessment can be considered conclusive. Metzeler produced a modified version of its ME880 Marathon tire for the Thunderbird, using a 120/70R19 front and 200/50R17 rear, which provided good grip on the mountain roads.

A testament to how well-balanced the Thunderbird is comes during a prolonged session of lane splitting. Returning to Barcelona, we encounter Friday afternoon rush hour and are forced to ride between lanes of stopped traffic for over 20 kilometres. It’s a legal activity in a country where scooters are the preferred weapon of choice, but the Thunderbird accounts for itself well, slipping by frustrated motorists with only an inch or two between their mirrors and the ends of our handlebar.

The tank-mounted instrument nacelle forces the rider to take eyes off the road and would be useless if a tank bag were mounted. A speedometer sweeps through the upper half of the large circular face while a smaller tachometer ranges through the bottom half. In between the two is an LCD display controlled by a toggle switch mounted on the right handlebar. The switch allows the various display options to be accessed, but it is located where you expect the starter button to be. More than one person (myself included) was dumbfounded while trying to start the bike, as we mistakenly jabbed the wrong button.

The seat is broad yet firm, and though I anticipated that it would be uncomfortable by the end of the day, it was better than first expected. At a height of 700 mm (27.6 in.), it’s a workable platform for a wide range of inseams, as is the reach to the handlebar and foot pegs. However, the reach for the hand levers is considerable, and span-adjustable levers should be standard. Even with my relatively large mitts, I would have preferred them slightly closer to the grips, especially the brake lever.

The Thunderbird stops via three 310 mm discs, with twin Nissin four-piston calipers up front and a two-piston Brembo at the rear. The system is extremely powerful and easy to modulate, coming into its own on the mountain roads, as late in the ride a few of us try to out-brake each other GP-style on the way into corners. Triumph offers an ABS system for an additional $1,000, and it would be a prudent investment.

The Thunderbird will have shipped to dealers by the time you read this. At $14,899 it’s good value—as long as you steer clear of Triumph’s accessory catalogue, which already has more than 100 items with which owners can customize their bikes.

During the day we’ve ridden roads that weave into the terrain of Montserrat Mountain in Catalonia, catching brief glimpses of the famous Benedictine abbey Santa Maria de Montserrat high up the mountain. The Arthurian legend of Parsifal names this abbey as the location of the Holy Grail, which is exactly what Triumph is seeking with this bike. It will be interesting to see how receptive cruiser traditionalists will be to a parallel twin. On the basis of performance it deserves to do well, and while its styling may not inspire, of much more importance is that it doesn’t offend. That may seem like back-handed praise, but cruisers are judged by a yardstick quite different from what -Triumph has excelled at in the past.