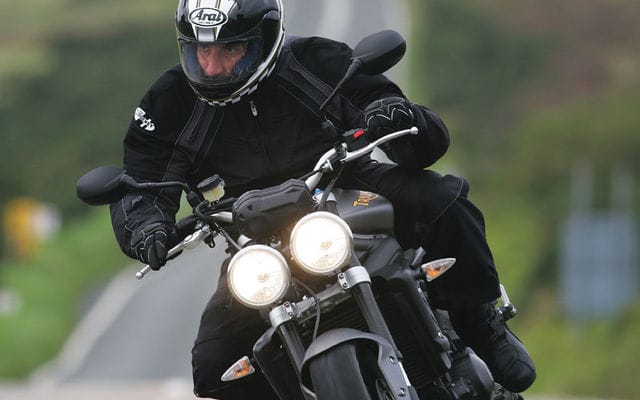 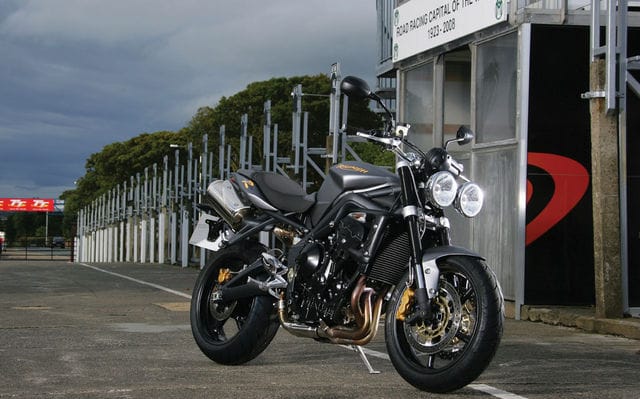 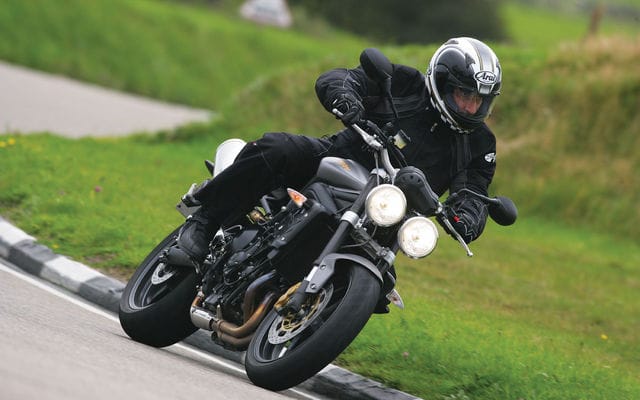 An occasional glimpse of 90 mph on the digital speedometer is one indication that I’m travelling at a “brisk” pace, but the real giveaway is the rush of stone walls and curb-side trees, whisking by uncomfortably close along these narrow, winding country lanes. The occasional car zips by in the opposite direction reminding me to keep a smart line, but this doesn’t cause me to back off the throttle. I feel not the least bit of guilt about my high rate of speed because no laws are being broken. You see; there are no speed limits when you’re outside town limits on the Isle of Man. Speedy motorcycles are a common sight on the small island on the Irish Sea, for it is the home of the legendary Isle of Man TT road race—and it’s where Triumph held the press launch of the 2009 Street Triple R.

Upon arrival on the Island, Triumph arranged a guided tour of the 37-mile TT course, narrated by Richard “Milky” Quayle, a four-time TT winner, and a true Manxman. The tour was meant to familiarize us with the course, but listening to Milky’s colourful narrative (“…by the time you get o’er here [referring to a section about halfway into the circuit], you’re sweatin’ like a rapist”), I was glad to be here on a press launch, and not competing in a race. Quayle has an uncannily intimate knowledge of the course and uses manholes, trees, telephone poles and cottages as turn-in points and braking markers: “Coming up over here, I look for the white rocks—there they are—and pitch the bike right!”

Quayle had no choice but to use such visual references, as many of the course’s tighter sections are narrow and blind, with absolutely no run off. Calling the Isle of Man Mountain Course challenging is like saying Rossi is a good rider—a monumental understatement. You can watch hundreds of hours of race footage, yet never grasp the scope of what TT riders accomplish until you’ve ridden the circuit. The Glen Helen section winds its way beneath overhanging trees where sunlight pokes through the canopy above like blinding flash bulbs going off in your face—at more than 100 mph I’m certain the rapid, intermittent flashing can trigger epileptic seizures in some.

Then there are the towns you ride through, where homes, pubs and hardware stores line the course, and one wrong move can result in an unexpected visit into someone’s living room. Here, Quayle noted that he rides even harder because the sound of his bike reverberating off the passing buildings gives him the impression someone’s on his tail. We’re talking a different breed of racer here.

At many places hay bales are propped up against stone walls, but aside from reducing the available 18-inches of run-off to nil, do little else. Quayle had a run in with one of those walls in 2003 when he brushed his shoulder against one at well over 100 mph and lost control of his race bike. The resulting crash forced him into retirement.  I’m grateful then, that as soon as I let the clutch out on the Street Triple R, it felt like I had seasons of riding time accumulated on the machine. The compact yet accommodating upright riding position feels natural and complements the bike’s neutral handling nicely. The machine has a slender midsection and feels lighter than its 167 kg (367 lb) dry weight.

The R is very similar to the Street Triple introduced last year but with a sportier edge. Triumph engineers on hand claimed the R’s suspension settings are firmer, falling between the softer Street Triple and the firmer Daytona 675, and front and rear dampers are now fully adjustable. Front brakes are borrowed from the supersport Daytona, with Nissin radial-mount four-piston calipers replacing the twin-piston sliding calipers of the Street Triple. The rest of the changes are mostly cosmetic.

Neil Graham had noted at last year’s launch of the Street Triple that he’d have preferred a brushed aluminum handlebar to the cheapish looking chrome item; Triumph conceded, adding a tapered aluminum handlebar to the Triple R. A stylish two-tone seat is added and the paint has lost its lustre; the R is available in graphite or orange matte finishes, adding a measure of mean to this otherwise docile street fighter. These changes increase the R’s retail price to $10,499, a scant $500 over the Street Triple. The improved brakes alone are worth at least that much.

Docile might not be the best word to describe the Street Triple R, because its 106 horsepower is capable of propelling it rather quickly to high speeds. What it is, is tractable, its 675 cc inline triple generating more than 44 lb-ft of torque from 4,000 rpm to just past 12,000 (a 51 ft-lb peak is attained at 9,200 rpm). It’s one of the flattest torque curves in motorcycling and makes the Street Triple an absolute joy to ride. Rolling on the throttle exiting a third-gear corner produces a delightfully instantaneous forward push that’s accompanied by that rich 120-degree firing-order growl we’re always raving about. Few motorcycles produce such a satisfying sound and feel.

Pitching the R into a corner is effortless, its firmer suspension keeping the machine planted through tight second-gear hairpins as well as flat-out sweepers. High side winds at some of the faster, open sections of the course ruffled my jacket sleeves, inducing a light weave, but this was negligible compared to the machine’s overall stability.

The night before our ride, our bus tour ended at the Creg-Ny-Baa public house, where I enjoyed a delicious serving of Manx queenies. Inside are hung pictures of TT legends; Agostini, Dunlop, Hailwood are but a few immortalized on the walls—as is the case in most of the eateries we visited. Island residents embrace motorcycles—fast motorcycles—like nowhere else I’ve seen. We returned to the pub during our ride for some action photography. It is located on the receiving end of a 90-degree right-hander that joins two long straights. It’s here that I find the only flaw in the R’s handling—limited steering lock. U-turns often require some backing up.

Seat comfort seemed better to me than it did for Neil when he rode the bike in Italy, but admittedly, I was concentrating so intensely on negotiating the circuit that my brain shut down all secondary systems, like signals sent by pain receptors.

In stripping the Daytona 675 and incorporating a relaxed seating position, Triumph has produced one of the best-balanced motorcycles in its lineup, and probably in others’ lineups as well. Perhaps balance is a word that better describes the Street Triple R (or even the less expensive Street Triple). It will fit as easily into the garage of a novice as it will into a canyon carver’s or stunter’s, and that’s a pretty tall order to fill.