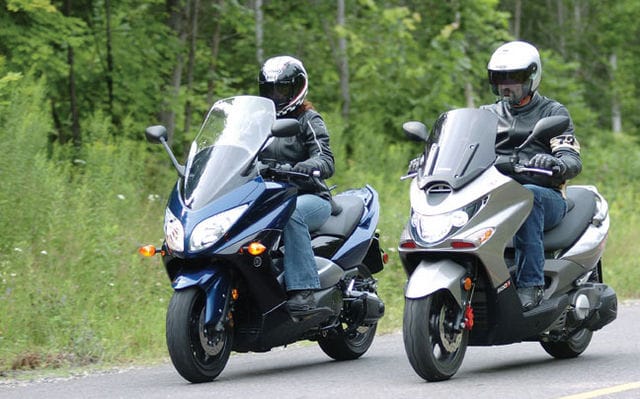 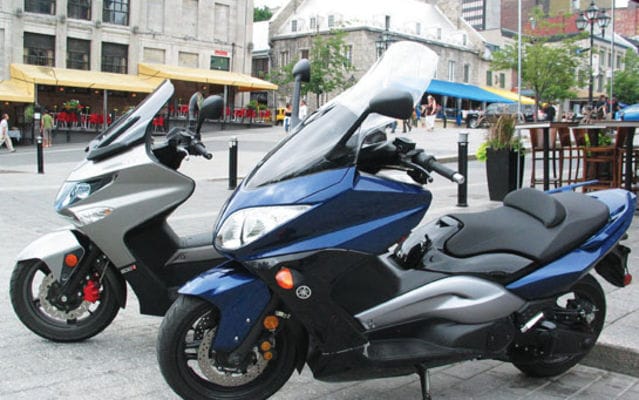 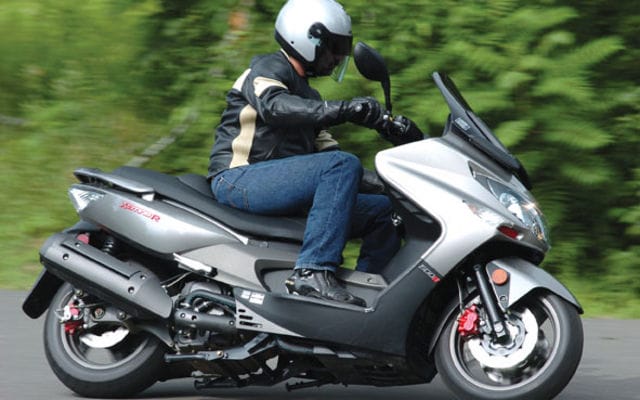 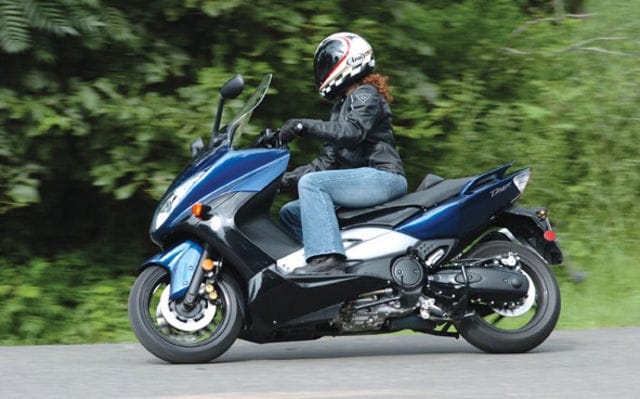 There’s one sure indication that large-capacity scooters are in high demand: they attract more attention from bystanders when parked than custom bikes do.

“Those are great looking scooters, but my Burgman is faster than both of those, and there’s more room under the seat—I can fit two helmets in there,” declares the semi-retired Burgman 650 rider, eyeing the Kymco Xciting 500 Ri and the Yamaha TMAX, while we fill up at a gas station. Owners of large displacement scooters seem to share the enthusiasm of motorcycle owners and are as likely to proudly defend their rides against competing brands. This knowledgeable gentleman had done his homework and was well versed on the technical details of both machines. “Is that Kymco fast? It’s a single, right?”

The 2009 Xciting Ri was introduced earlier this year and is the largest displacement two-wheeled Kymco available in Canada. It’s powered by a high-spec, liquid-cooled 499 cc four-valve single that claims 40 horsepower. Bright red calipers call your attention to the triple disc brakes; four-piston units up front provide strong braking, though the initial bite is somewhat soft and lever effort moderate. A handbrake is located on the forward panel (scooters need this automotive feature, as they can’t be left in gear when parked), just below the conveniently placed fuel filler cap that pops open when the ignition key is turned all the way right. We initially thought the filler cap’s location was innovative, allowing you to gas up while seated, but at the first fill up we discovered that when filling quickly, fuel splashes out of the spout, dowsing your legs in gasoline—better to dismount and back the lever off the fuel nozzle next time.

The Kymco is a large machine, and particularly wide at the rear, though despite its bulbous physical dimensions, the seating position is more cramped than the slimmer, sleeker TMAX. Six-foot riders found the floorboards too high, and the seat-to-handlebar relationship too tight. Shorter riders liked the seating position, and found its lower seat height, which combined with a narrower seat, easier to manage at a stop.  The Kymco thumps away from a stop with more grunt than the Yamaha, and has a meatier bottom end. It shakes somewhat at lower speeds, but the vibration is damped and unobtrusive, and it cruises happily and vibration-free at highway speeds. You will need another reference to gauge your velocity on the open road other than the Xciting’s overly excited speedometer (we used a GPS), which indicated 20 to 30 km/h above actual speed.

Handling is uninspired, the machine is stable in a straight line at speed, but suspension compliance is substandard. The preload-adjustable twin rear shocks work fine, soaking most bumps without harshness, but the fork sends jolts though the handlebar, which reverberate through the chassis. It seems softly sprung and under damped when bouncing on it at a standstill, which suggests it bottoms too easily. The steel-framed chassis exhibits some flex, not the tortional kind like on earlier motorcycles with spindly steel frames, but longitudinal, like a leaf spring. This doesn’t inhibit handling—it just feels odd. Cornering clearance is hampered on the left by the centrestand tang and on the right by the exhaust, either side touching at a moderate pace.

The seat is unlatched through the ignition switch, revealing a moderate storage compartment, good for a full face helmet and some smaller tidbits, but you’d better be careful when packing it because if there’s the slightest upward pressure exerted on the seat the release mechanism loads and it refuses to open unless you push down hard on it. One unfortunate tester discovered this after he rode home in a downpour with his rain suit neatly tucked away and inaccessible. A couple of convenient features include a power outlet located under the seat, as well as a cellphone or Blackberry holder, which ensures your communication device won’t bounce around while charging. Another convenience, whether intentional or not, is the loud turn-signal relay, which makes it nearly impossible to forget to turn the signals off.

Yamaha’s TMAX is new to the Canadian market, though it has been available in Europe since 2001. Revamped for 2008 with a new aluminum chassis and sportier bodywork, the Yamaha comes to Canada as an early release 2009 model. Its liquid-cooled, DOHC parallel twin displaces 499 cc and claims 43 horsepower. Fuel injection on both machines eliminates the need for a complex starting procedure, though as on other scooters the side stand must be up and one of the brake levers pulled for the starter to engage, something which infuriated one of our staff members when he couldn’t start the Yamaha after a lunch stop. He figured it out before calling a cab.

The rev-happy counterbalanced engine is remarkably smooth, and it pulls seamlessly and progressively harder as the revs increase. Though not as brisk off the line as the Kymco, the Yamaha excels when passing cars at highway speeds. The TMAX bettered the Xciting’s 5.1 L/100 km (56 mpg), averaging 4.6L/100 km (61 mpg), both figures attained in combined highway and city riding. This increased fuel mileage combines with a larger, 15-litre fuel tank (12.8 for the Xciting), to provide a respectable range of 325 km.

The TMAX can easily handle the added range with its more accommodating seating. It has ample legroom and a more spacious cockpit, though its taller, wider seat wasn’t popular with those of diminutive stature. Its taller windscreen offers increased wind protection, but it comes at the cost of excessive helmet buffeting, experienced mostly by taller riders. Black-faced instruments are more subdued than the Kymco’s louder white-faced gauges, and the speedometer is more accurate, indicating 8 km/h above actual speed. Both machines have tachometers, the Kymco’s analogue counter more readily visible than the Yamaha’s LCD bar tach, though we question the necessity of said item on machines that don’t require gear shifting.

Handling is the TMAX’s most outstanding trait. This is the R6 of scooters, and it manages winding roads with agility approaching that of its supersport cousin. Steering is precise and very un-scooter-like; only its chair-like riding position gives this Yamaha away as a scooter. Its aluminum frame is rigid, beneath which lies a Buell-like extendible single shock. Suspension is non-adjustable, but response is compliant and well mannered—even by motorcycle standards—and the machine remains equally poised whether negotiating a series of tight, turning transitions or long, fast sweepers. TMAX brakes can only be described as category breaking. These R6 derived stoppers, with twin, monoblock four-piston front calipers and single-piston rear caliper, and a trio of 267 mm discs, haul this scooter down violently with a single finger at each lever. Neither bike has an ABS option yet, but of the two the Yamaha could use it more.

Like the Xciting, the TMAX offers less under-seat storage than other maxi-scooters, like the Suzuki Burgman, the Honda Silver Wing or even the firm’s own Majesty. It does have two deep compartments in the forward inner panel, as opposed to one shallow compartment on the Kymco.

The Kymco Xciting 500 Ri and the Yamaha TMAX have just increased the maxi-scooter pool, making choosing such a machine that much harder. At $9,999, the TMAX is at the upper range of maxi-scooter pricing. It does, however, offer sport bike performance, a claim that for now belongs only to the TMAX. What the Xciting lacks in performance, it makes up for in value, undercutting even its 400 cc competition by $500 at $7,499. Performance or value; whichever you choose, these scooters deliver.

I am a daily rider and can appreciate the added convenience of these big scooters. They have storage capacity that my motorcycle doesn’t without adding saddlebags or a tank bag, and although I consider them big scooters, they’re not overwhelming, too big or too heavy, and they are very manageable. In this respect, the Yamaha T-Max really appealed to me. I had an easier time managing it at low speeds because of its lower seat height (I’m five-foot-four) and narrower midsection. The Kymco felt taller and vibrated when taking off, unlike the Yamaha, which was electric smooth—and I prefer that. The Kymco is less expensive than the Yamaha but sometimes it’s worth paying a little extra for added comfort and confidence.      —Roxanne Gallery

As I age, I find myself looking more and more at large-displacement scooters; not for their easygoing twist-and-go transmissions, but for the weather protection they offer and the convenient under-seat storage. Volumes can be written about how convenient it is to pop the seat and throw a laptop, a spare helmet for a waiting passenger or a rain suit under there, and ride away. But the Yamaha T-Max adds to a scooter’s appealing traits a level of performance that doesn’t make me miss motorcycles when I’m riding it. This thing rockets comfortably along winding roads, and feels more like a motorcycle than any other mega-scooter I’ve ridden. It’s been quite popular in Europe, and I now understand why. The Kymco is a bargain, but for someone considering trading a motorcycle for a scooter, the T-Max will make the transition much smoother, even pleasant. What took Yamaha so long to bring it here?      —Costa Mouzouris