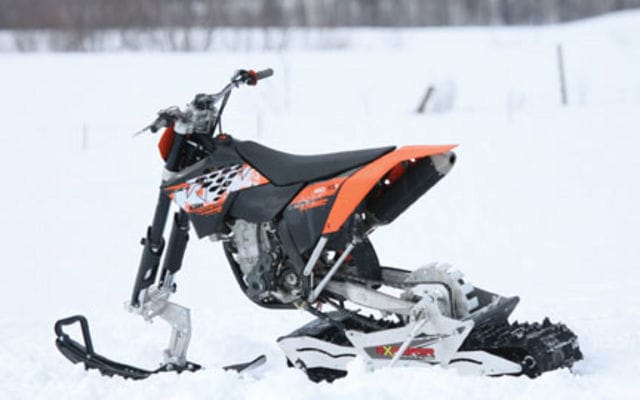 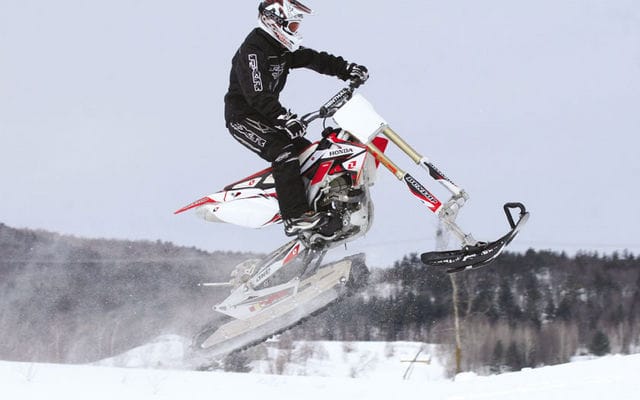 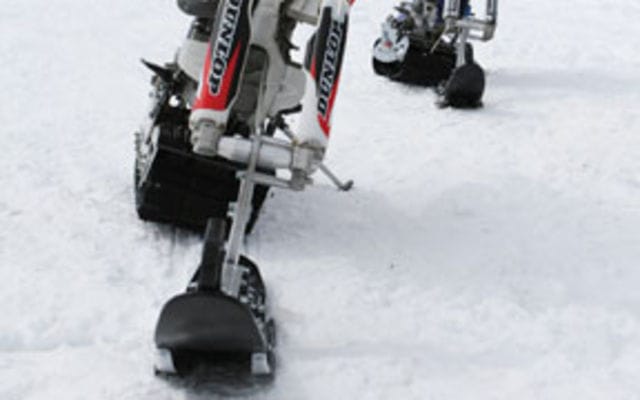 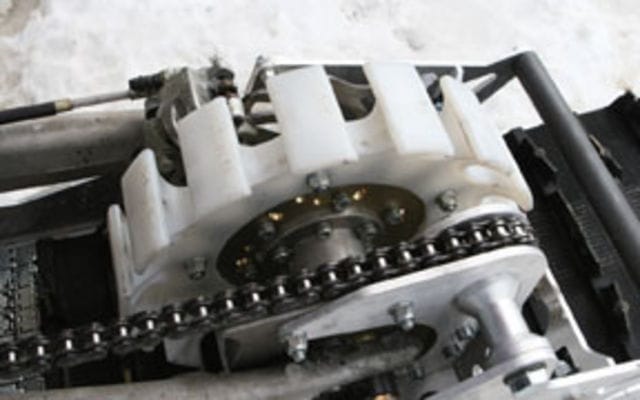 Unless you reside on the west coast, winter in Canada means having to deal with frigid temperatures and, perhaps more detrimental to motorcyclists, snow. While three feet of fresh powder is enough to make skiers and snowmobilers giddy, the same cannot be said for motorcyclists. Fortunately, some creative minds in Quebec have been hard at work trying to redress this terrible injustice.

Founded by Alain and Denis Boivin, AD Boivin (adboivin.com) is a company based in Levis, just outside Quebec City. The brothers pioneered the Snow Hawk, a unique single-ski snow bike that has carved itself a niche in the off-season off-road market. Having ridden a Snow Hawk, I can attest that it is a formidable antidote to the wintertime blues. Now AD Boivin offers up the Explorer so you can extend your riding season and keep one less vehicle stored in the garage.

The Explorer is a kit designed to bolt on to late-model motocross and enduro machines, adapting them for use on snow. The complete kit ($2,948) includes the track and ski, though each can be purchased separately (ski: $949; track: $1,999), if one wishes to retain the front wheel while still benefiting from the added floatation of the track for deep sand or mud riding.

Up front, a special bracket utilizes the front axle and brake caliper mounts to secure the ski fixture. Benefiting from the lessons learned with the Snow Hawk, the bracket provides 203 mm of trail for increased straight-line stability. The ski is Boivin’s unique Twin Axis design, its concave shape and dual runners helping to maintain control when heeled over. Measuring 20 cm wide for excellent floatation, the ski is also fitted with a Snowtracker steering stabilizer (made by SCMGL of St-Elzéar, Quebec), further improving stability, while ensuring adequate bite in loose snow.

Another Snow Hawk holdover is the ski’s mounting mechanism which allows for some side angle movement. The heart of the Explorer system, however, is mounted to the rear swingarm. The quarter-inch thick aluminum side plates are secured at the axle, as well as by adjustable coupling rods fastened to the footpeg mounts via brackets. Adjusting the coupling rods length allows alteration of the attack angle of the 29.2 cm wide track. Meanwhile, the arc machined into the side rails (equivalent to a 150-inch diameter wheel) helps to maintain the weight just behind the drive axle regardless of the length of the coupling rods. While the side plates themselves have no provision for fore-aft adjustment, the arced grooves machined into the rails allow the track and wheel assemblies (14 in total) to be moved over a 30 cm range. Moving the assembly forward helps to enhance deep snow capability, as well as quickening steering response. Sliding it rearward aids straight-line stability and is a better setup for gliding across hard-packed frozen lakes.

The bike’s front brake disc migrates to the rear, accompanying the rear brake caliper in slowing the track for braking. The track is driven by a 16-tooth nylon sprocket acting directly on the track lugs. Installation time is estimated at 90 minutes, though the manufacturer claims this time is reduced once the owner becomes familiar with the procedure. The total package adds roughly 16 kg (35 lb) to the motorcycle and increased frictional losses result in a drop of between 7 and 15 percent in power delivered to the ground. For this reason, Boivin recommends lowering the gearing slightly. While the kit can be fitted to 250 cc four-stroke machines, it is recommended for 450 cc four-stroke/250 cc two-stroke bikes or larger.

I got a chance to ride a Honda CRF450R equipped with the Explorer and was impressed with the way it worked, despite less than ideal testing conditions, with a thick, icy surface crust on top of snow. As I quickly learned, kick-starting should be done on a relatively hard surface so as to avoid an embarrassing tip over, with your leg disappearing into the soft snow. Because of the added weight and frictional losses, abundant throttle had to be applied on take-off or the engine would stall, and the CRF’s usually snappy throttle response was toned down. Once underway, however, the modified bike can be ridden quite normally, though shifting gears strains the engine more than usual and short-shifting is to be avoided.

Riding off into the deep stuff, the bike powers through with relative ease; the mix of engine power and track floatation allowing it to glide along largely unencumbered. Turning effort is obviously greater than with a wheel on harder ground, a product of the long ski tracking into the snow, but the CRF nonetheless responds well to input and can be banked over as far as the rider dares. The nervousness I initially felt at the apparent lack of traction when banked over in turns disappeared quickly; I was soon attacking turns with increased speed and resolve. Straight-line stability was remarkable and the rider is not forced to constantly fight with a darting front-end, which remained planted and assured.

A deep ravine located in the middle of the test area provided an excellent opportunity to test traction, and the Explorer CRF charged up the sides with ease, generating enough momentum to produce some air once over the top. Once airborne, the bike remains stable and confidence-inspiring, exhibiting a balanced weight distribution. Landings were handled with composure and the suspension action remained cushy.  Perhaps the greatest testament to the capability of the Explorer system was demonstrated by AD Boivin’s test and development rider Kim Routhier. In his expert hands, the Explorer CRF flowed effortlessly and quickly around the test course, appearing to handle as a stock bike would on dirt. But that’s the point of the Explorer; for off-road riders, it fills the gap between riding seasons quite effectively, and we can all appreciate that.