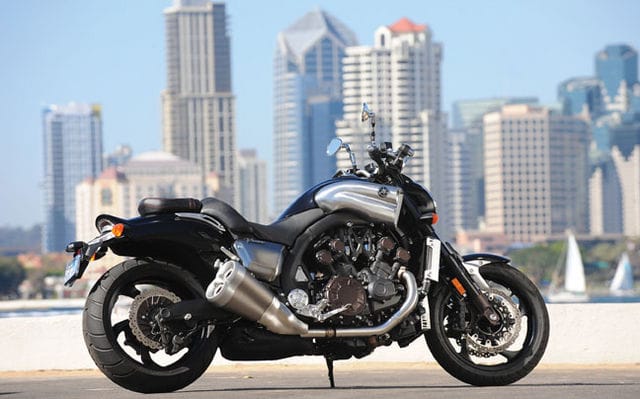 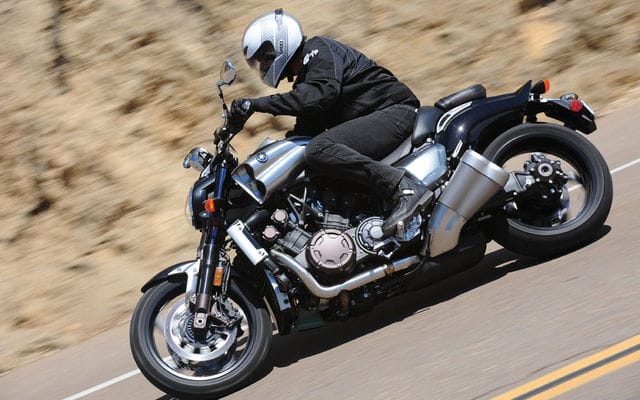 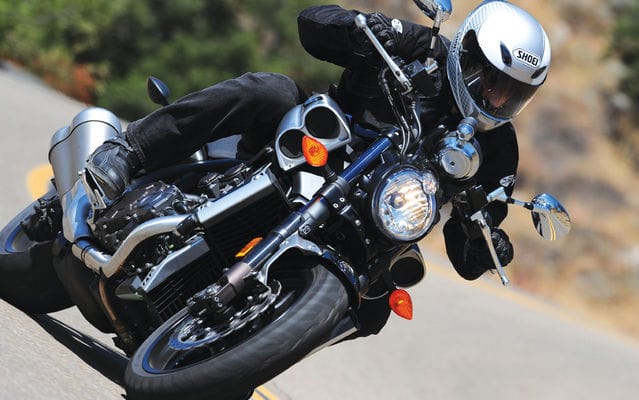 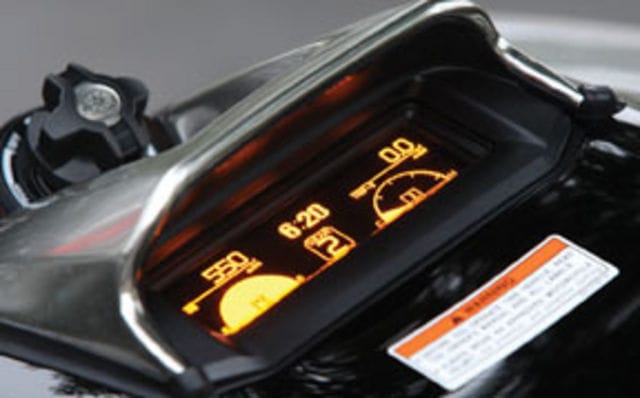 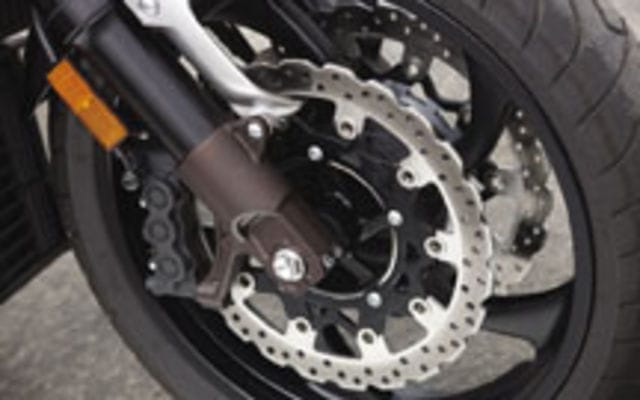 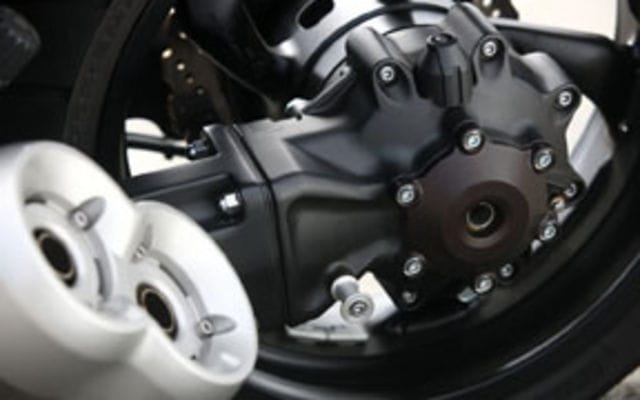 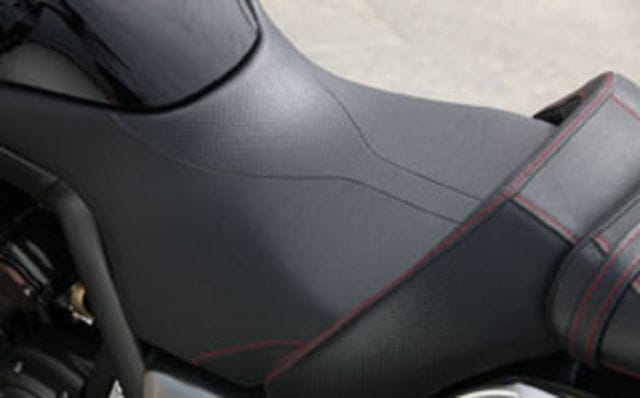 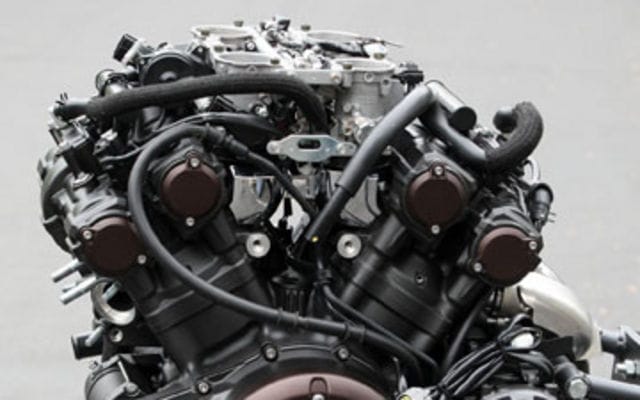 If going fast around corners is your thing, the V-Max isn’t for you. But if you thrive on getting a G-force induced rush, climb aboard.

Do we really need 200-horsepower motorcycles? The sensible answer is no—half that amount is more than enough to enjoy the visceral feel a motorcycle provides. But that’s for riders of a rational mindset, and all rationale was abandoned the moment I twisted the throttle on the 2009 V-Max. As my butt cheeks flattened against the Max’s seat hump, my primitive brain took over, managing only basic functions like hanging on and breathing. I had to fight the urge to belt out a primal scream under my helmet, such was the invigoration I felt. Unlike other high-power motorcycles with massive engines, like the Triumph Rocket III or Kawasaki ZX-14, V-Max power isn’t subdued in the lower gears—you don’t accelerate away from a stop; you blast off.

This bigger, bolder V-Max has been long anticipated by current V-Max aficionados and it’s highly unlikely they’ll be disappointed. With a claimed 197 horsepower it’s the most powerful production motorcycle to leave a Japanese assembly line. With the additional horsepower (48 per cent more than before) comes added weight, and this is immediately noticeable upon lifting this brute off its side stand, which takes a moderate amount of effort. The machine feels long, and wide in the midsection, spreading knees as if straddling a Quarter Horse. Seating is relaxed (quite a contradiction to the frenetic power within) and upright with a slight forward reach to the tapered aluminum handlebar. The seat is wide and supportive, easily handling our daylong ride in southern California. Not deterring from comfort, despite desert heat in the low 40s Celsius, was a notable lack of engine heat, even while making several gruelling passes for the camera.

While the new V-Max has enhanced the old Max’s trademark features, like its eye-popping straight-line acceleration and guttural engine sound, it shed a few of its lesser-appreciated traits, namely its (literally) shaky handling. We’re told during the technical presentation that engineers worked hard at creating a forward weight bias, locating the engine as far forward as the new aluminum chassis allowed, thus improving handling. While handling is quite a departure from the previous model’s (my notes said of the V-Max we tested in 2005, “You never know what the V-Max will throw your way. A tankslapper, a mid-sweeper weave, maybe a spine-rattling jolt from a bump”), the bike is no back-road burner. The long, heavy machine resists turning, needing constant pressure at the handlebar to keep leaned. Trail braking, for whatever reason a V-Max rider might think it necessary, is to be avoided, as it increases the bike’s tendency to stand up in a turn. The V-Max is, however, very stable whether in a straight line or railing through a sweeper, and the fully adjustable suspension is compliant, smooth and refined in action.

About the only thing slow about the V-Max is its ability to negotiate tight turning transitions; if you attempt to force it into a series of esses, you’ll find yourself running wider with each successive bend. Handling better resembles that of a cruiser, but with useable cornering clearance and tons more power. Whatever ground you lose in a turn, you’ll easily make up once the bike is vertical. Did I mention this bike pulls hard? All that speed must be shed before entering a turn, and the ABS-assisted brakes haul the beast down quite handily, though the front brake exhibited some fade, with the lever coming closer to the handlebar during a long, winding decent.

An intimidating, low-pitched rumble accompanies start-up, and serves as a precursor to what awaits on the other end of the throttle cable (which is actually YCC-T fly-by-wire throttle control). Clutch pull is relatively light considering the bike’s high output, and gearbox action is precise, though shifting through its five gears is infrequent due to the machine’s monstrous torque. Roll on the throttle in the lower gears (and you do need to roll it on—snap it open and the rear tire lights up in a blaze of smoke) and the V-Max detonates with an explosive forward rush rarely experienced on a street bike; this bike is clearly about rapid acceleration. The bike’s forward weight bias combines with its long wheelbase to allow full-throttle, first-gear passes without fear of being catapulted rearward, something not possible on an open supersport.

Top speed was of little interest when conceiving the V-Max; it is electronically limited to a maximum velocity of 220 km/h (a responsible move on Yamaha’s part), though you’ll get there awfully fast. Despite the Max’s penchant for power, it is remarkably easy to ride at slower speeds, with linear throttle response that’s easy to modulate, though as mentioned earlier, the bike is a bit hefty—not the ideal city commuter.

Black is the only colour available for the $21,999 V-Max, and only 200-250 will be available in Canada for the 2009 model year. Half were already spoken for at press time through Yamaha’s pre-order programme, the rest likely to be swallowed up quickly by hardcore quarter-mile enthusiasts. If the new V-Max retains its cult status and custom builders work their magic on it, expect to see some radical examples with outrageous power claims in the near future, because for the hardcore V-Maxer, almost 200 horsepower isn’t enough.