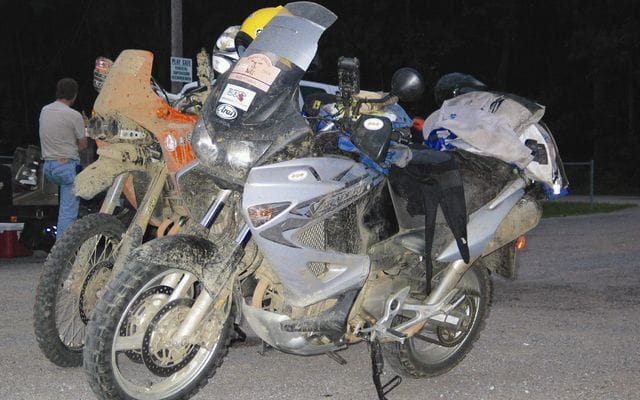 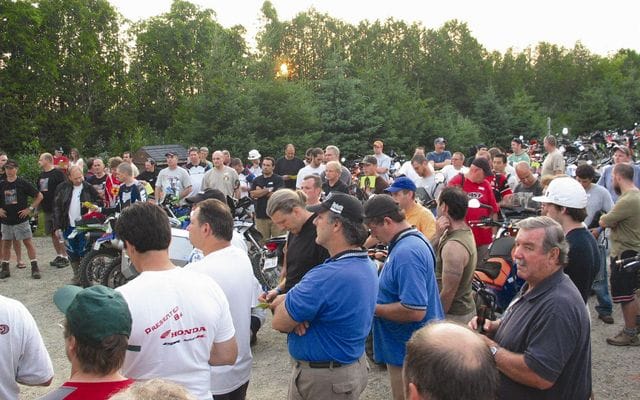 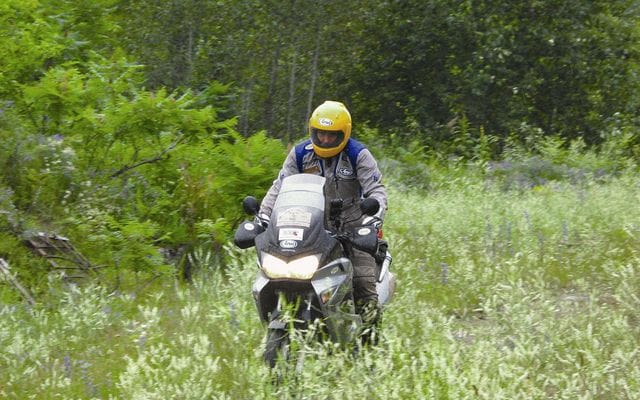 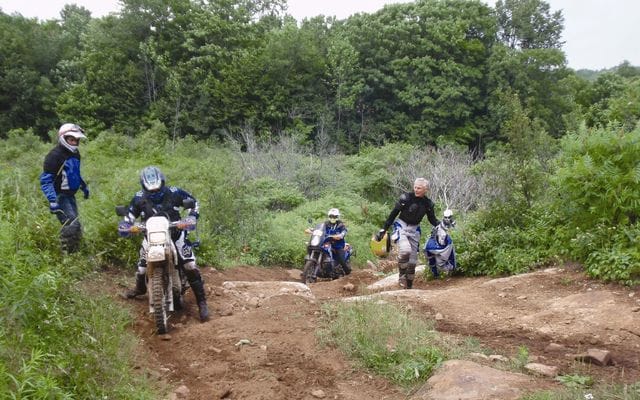 To Dacre and Back

Our long-term Honda Varadero is put through the ultimate test: the 2008 running of the Paris to Dacre Dual Sport Adventure Challenge.

I felt sorry for what I had just put Cycle Canada’s long-term Honda Varadero through. There it sat near the gas pumps, at the final fuel stop before arriving home, scraped, dinged, covered in dried mud, and dripping oil on the pavement, when a beaming CC reader approached. “It looks like it has been through a war,” he exclaimed. “Hey! That’s the new Honda Varadero!” “Yeah,” I said, “I rode it 800 kilometres yesterday, much of it off-road.” The look of surprise on his face said it all. This is a test bike that had been tested.

I left the gas stop and sailed down the highway at 130 km/h. The Varadero managed this highway jaunt like any good adventure-touring machine would, yet just yesterday I rode it in the third running of the Paris to Dacre Dual Sport Adventure Challenge, negotiating some of the most rugged back country wilderness trails in Ontario.

The first Paris to Dacre rally took place in 2005 after John Baxter learned of Bob Bergman’s Paris-Dakar Rally finish that year. Thirty-three riders took part in that rally, and the following year, 44 showed up. It was after the second P2D that organizers decided to make it a biennial event. The original idea stems from a conversation I had with former Cycle Canada editor John Cooper in 1987, when we’d discussed the idea of riding from Paris to the numerous other towns in Ontario that share names with cities around the world, and there are many: London, Brussels, Egypt and Moscow being but a few. That’s when John had mentioned that there’s a Dacre in Ontario, not quite Dakar, but it sounds close enough. A year later Max Burns and Bruce Reeve rode from Paris to Dacre and documented the story in the August 1988 issue of CC.

Entrants preregistered for this year’s P2D and spaces sold out quickly; the maximum amount of entries was even extended to keep up with demand. Motorcycles had to be street legal, licensed and insured, and it was made very clear that this was not a race: the objective was for the teams of three to five riders to finish intact. The P2D is intended to resemble one day of the Dakar rally.

An indication of the difficulty of the P2D is the attrition rate: this year 105 riders started the rally, and only 33 finished—and this only because organizers extended the arrival time by an hour and a half. Most finishers were on full-fledged enduro bikes. Only one of the 19 teams made the 810 km route within the original 17-hour allotted time.

I chose to ride Honda’s 996 cc V-twin adventure bike in the P2D because it is a comfortable machine with a big fairing and lots of torque, and it would easily manage the faster, flatter first half of the rally, which was 500 km of mostly paved and gravel roads. At 277 kg (610 lb) wet, the Varadero was twice the weight of the average dual-sport taking part in the rally, but I figured its comfy ergonomics and good road-going manners would leave me less fatigued at the midway lunch stop in Kinmount, and better prepared for the more difficult 300-kilometre second half of the rally. Unfortunately my math was off; the halfway point was at the eight-hour mark, and P2D organizers Rally-Connex (rallyconnex.com) estimated it would take about eight hours to complete the first 500 km, and eight for the last 300. This should have been my clue to the difficulty of the second section was.

The event started at 4 am in pea-soup-thick fog at Bruce Noble’s farm in Harley, Ontario, 20 minutes south of Paris. GPS navigation was mandatory, the route having been loaded into each rider’s GPS unit the day before. The route headed northeast from Noble’s farm in a circuitous course, zigzagging through southern Ontario and getting progressively more arduous. Near Haliburton, the trails looked familiar; I’d ridden them many times in the Corduroy enduro.

The Varadero is hardly designed for true off-road riding but worked surprisingly well in some very difficult conditions. The only preparation the Varadero got for the P2D was a set of Continental TKC 80 dual-sport tires and a tail bag to carry a spare inner tube. I had a small tool roll (also mandatory for the rally) in the tank bag, along with some very basic items in case the unforeseeable happened, which of course it did. As the day advanced, the conditions got progressively more challenging, much as Kevin Burnett of Rally-Connex had warned. At one point, a water crossing was so deep the wheels were submerged and water was coming over the windshield extension I’d grafted on. The V-twin engine never missed a beat and I was glad it was so water resistant; our remote location would have necessitated an airlift had the bike stalled.

Along a power-line trail, I’d encountered a steep, rocky ascent that required two attempts to climb. After my heated first attempt, I stripped off my jacket and helmet and tried again, charging over top of the rocky summit and surprising even myself. I then parked the bike and descended to help other riders up the hill, who were immediately astonished to see a Varadero parked on top.

After countless kilometres of two-track trails peppered with mud holes and water crossings we emptied out onto a gravel road. A glance at the trip meter revealed we’d covered 550 kilometres, 14 hours after setting out. That’s when I noticed the oil light flickering and pulled over. Sure enough, oil was pouring out the bottom of the engine in a steady stream, a stray rock having done its deed. In retrospect, it wasn’t prudent to attempt the P2D without having installed a skid plate but I was short on time, and as I noted earlier, I wasn’t expecting the route to be so difficult. I borrowed some epoxy and sealed the crack in the oil pan, added two-litres of oil from a nearby gas station and was on my way once again. Unfortunately, this delay put me past the time limit at the second of three bail points, so I continued to the finish in Dacre on the highway.

Riding such a massive bike off-road requires patience, a deft touch at the controls and the knowledge that the bike is going to go in the direction it is already travelling, not necessarily where you’d like it to go. It helps to bear in mind that you shouldn’t ride it into anything that you can’t back out of if conditions worsen. Clearing obstacles is easier on a big bike; just use your momentum to blast a path where there isn’t one. Despite the aggressively treaded Continental tires, the Varadero was susceptible to pushing the front tire in the greasy, muddy ruts, though by keeping my momentum, it stayed on its wheels. It tipped over a few times but only when I was stopped and lost my footing in the mud.

Despite the warnings it was not a race, some riders pushed hard in an effort to arrive first. Team Kaboom, a three-man team, riding big KTM V-twins, crashed into each other after missing a turn—after one team member turned around the other two crashed into him—total bones broken: three, evenly distributed among the team members. Another rider hit a deer barely 50 kilometres from the start in the thick fog and darkness, the result of that impact: one downed BMW G650X Challenge, one expired deer, and a sore, disappointed rider.

My team consisted of Sean Weisner on a BMW G650X Challenge, and Stephen Van Klink, aka ‘the Klinkster,’ riding his KTM 640 Enduro. Sean’s BMW quit running near Creemore, Ontario, a convenient downhill run from where we stopped, and the home of a popular brewery. Out of the rally, Sean took a guided tour of the brewery, and didn’t look the least bit disappointed. This meant our arrival into Dacre was bittersweet. Our team didn’t complete the entire course, and we finished one team member short. Some teams came in well after dark, exhausted and glad it was over.

I can see the Paris to Dacre rally becoming more popular in the future, and even suggested to organizers that it be expanded into an event spanning several days, with closed-course timed special stages like the Tour of Blue Island rally in Japan, which I competed in earlier this year. In 2001, I became the first Canadian to finish the Paris-Dakar rally. My DNF in the Paris-Dacre only motivates me to take on the challenge again when it comes around in 2010.