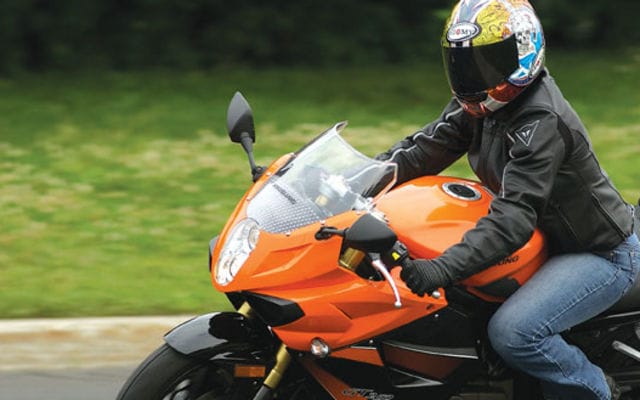 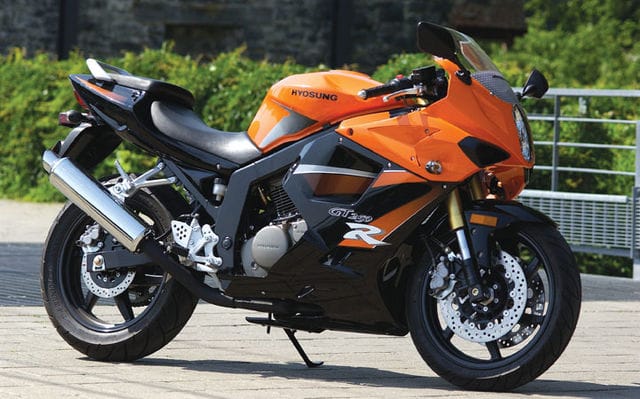 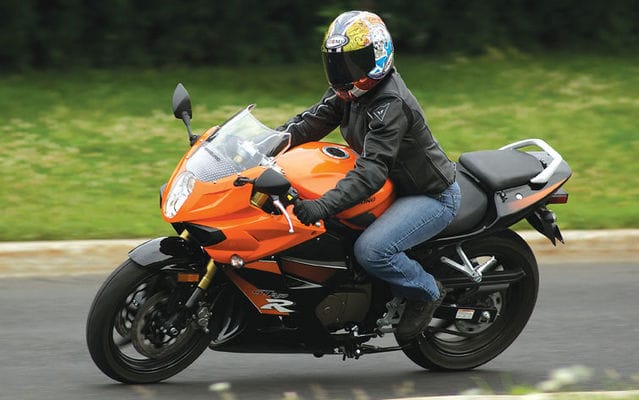 Hyosung entered the Canadian motorcycle market a few years ago, offering up bargain-priced motorcycles that got the job done. Now a few years along, the company has begun to move its image away from economical transportation to objects of desire, as the sporty GT250R illustrates.

Style without substance is a recipe for short-lived fame and long-term disaster, but fortunately Hyosung saw fit to equip the GT250R with decent components. Beginning with the engine, the air-cooled 75-degree DOHC twin is fairly sophisticated, coming with such features as roller bearing camshafts, two-piece spring dampened bevel silent primary drive gears and dual squish combustion chambers. The 248 cc engine (57 x 48.8 mm bore and stroke), while not new to the market, receives a closed-loop fuel injection system for 2008, the previous 26 mm Mikuni carburetors abandoned in the interest of cleaner emissions. A conservative compression ratio of 10.2:1 helps the small twin generate a claimed 28 hp at 10,000 rpm with maximum torque of 16.7 lb-ft arriving at 8,000 rpm.

Once fired, the bike can be ridden away immediately. Throttle response is smooth and predictable, and taking off from a stop is effortless, aided by a relatively torquey engine and a very light clutch. The new fuel injection system works mostly well, though our test bike had a discernible glitch. When partially rolling off the throttle to readjust your speed in traffic, the bike would slow as anticipated then surge forward before settling down again, which proved to be an annoyance around town. Hyosung distributor National Motorsports is aware of the problem and will be revising the injection mapping to correct this before delivery of new models.

The five-speed gearbox shifts smoothly with short, light shifter throws. Gear ratios are well spaced with top gear spinning the little twin 6,000 rpm at 90 km/h, though the engine remains vibration free throughout its rev range. The engine has a relatively broad powerband, though don’t expect mind-numbing acceleration. The GT250R maintains highway speeds easier than the Aquila 250 we tested a couple of years ago, easily cruising at 120 km/h, with adequate passing power still available if you’re not in too much of a hurry. Despite spinning between 8,000 and 9,000 rpm while following highway traffic, we recorded fuel consumption at 3.4 L/100 km (83 mpg), quite a lot better than the 6 L/100 km (47 mpg) we recorded on the Ninja 250R. This allows the GT250R a remarkable 500 km range from its 17-litre fuel tank.

The riding position is one area that is in stark contrast with the bike’s entry-level engine. Clip-ons are a Ducati-esque reach, placing an undue amount of weight on wrists and arms, and the footpegs, although adjustable, are supersport high and rear-set in their lowest and forward-most position. A beginning rider will get a very good indication as to what pain is endured when riding a modern supersport on the street, for it isn’t long before arms and neck begin to ache. Fortunately, the seat makes amends somewhat, its broad and flat shape tolerable for longer stretches. Wind protection is good with the windblast arriving at helmet level with no buffeting.

A stout, non-adjustable 41 mm inverted fork almost seems like overkill on a quarter-litre machine, but it combines with a sturdy twin-spar steel frame to provide handling that’s surprisingly competent. Soft fork-spring rates seemed mismatched with the firmer preload-adjustable single shock, and suspension compliance was a tad harsh, but the overall firm settings benefitted handling, providing surefooted feel and stability through corners. Sharp-edged bumps jolted the arms, but this was mostly due to the forward-biased riding position. The Shiko tires provided good feel and grip, but the rear produced an audible whining between 65-70 km/h, which at first had us searching for a bad wheel bearing.

More supersport overkill is the twin 300 mm front disc setup using twin-piston calipers, though it provides excellent stopping power with modest lever effort. In the rear, the 230 mm disc and two–piston caliper are sensitive to locking up.

Attention to detail on the little twin is mixed. Mirrors provide a good rear view and remain clear up to 110 km/h. The instruments are well positioned but the odd choice of a green LED digital display (tachometer is an analogue dial) makes them hard to see in daylight, particularly the neutral and turn-signal indicators. Plastic finish and fit and exposed threads on some too-long bolts just don’t exude a Japanese level of quality.

Styling drew mixed reactions; most found it to be a good-looking machine, but then were surprised to discover it was a 250. It’s a physically large machine, close in dimensions to a 600, and the few novice riders that sat on the bike found it too big and too heavy. Their impression of the weight was undoubtedly due to the bike’s claimed 185 kg (408 lb) dry weight, a whopping 34 kg (75 lb) more than the liquid-cooled Ninja 250R.

In the end, the biggest strike against the Hyosung GT250R has nothing to do with the bike itself (although more rider-friendly ergos and a weight loss -program would be welcome) but rather with the availability of its fresh-faced green competitor priced almost $1,000 less. Sure, the $5,195 Hyosung offers certain features that the Ninja doesn’t, namely fuel injection and phenomenal fuel economy, but for an entry-level rider, a grand in the pocket travels farther than extra fuel in the tank.