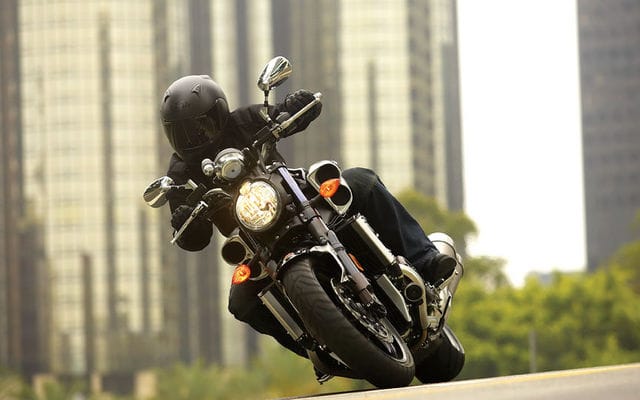 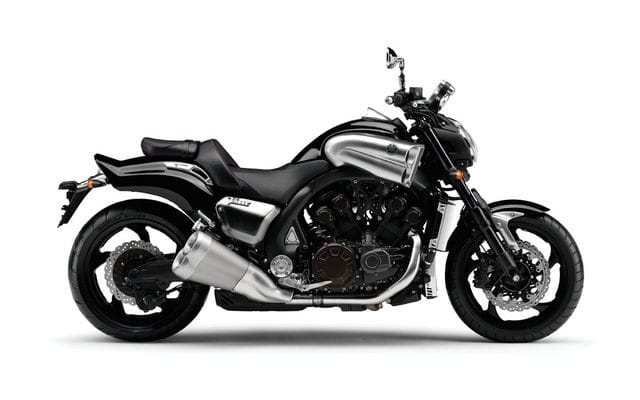 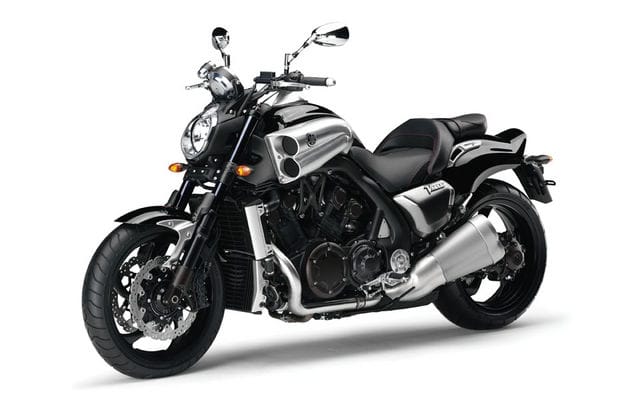 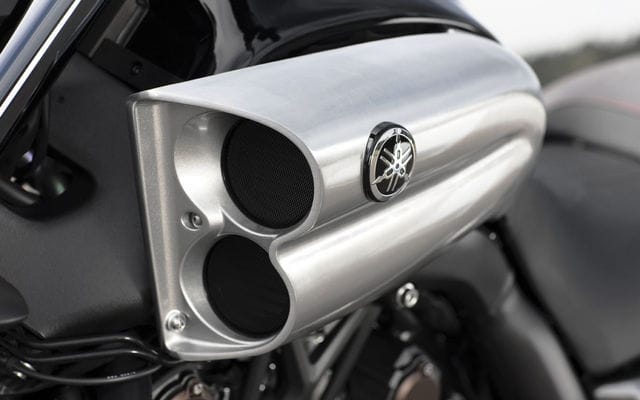 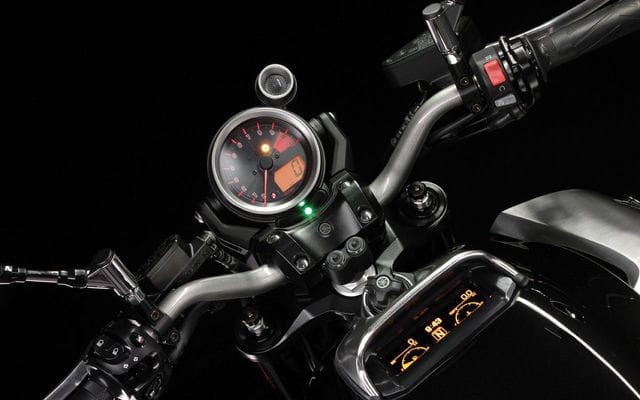 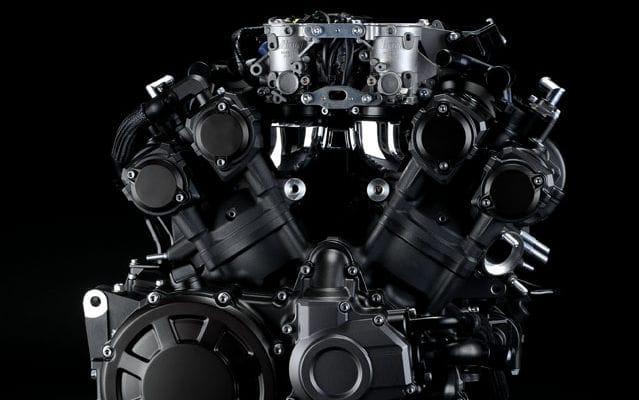 MAXIMUM OVERDRIVE   Almost a quarter century after the V-Max was launched, Yamaha has finally raised the curtain on the long-anticipated replacement for this cult -classic. It was a machine that was well ahead of its time when released, but as other machines progressed, it remained virtually unchanged. When we last tested the V-Max, in 2005, we titled the story The End is Near, even then anticipating its replacement. The biggest indication that a new Max was on the way, aside from leaked concept drawings, spy shots and prototype images, was the absence of the V-Max from Yamaha’s 2008 lineup.

Well, mad Maxers can breathe a sigh of relief because the 2009 V-Max is here—and it’s a beast of a machine. The centrepiece is a 65-degree liquid-cooled V-four (previously 70-degrees) with a boost in displacement from 1,198 cc to 1,679 cc by means of a considerably larger bore (from 76 to 90 mm), though stroke remains 66 mm. At the heart of the engine is a new 180-degree crankshaft, which uses a gear-driven counterbalancer to reduce vibration. The bottom-end is fortified with fracture-split carburized connecting rods, first used by Yamaha on the 2004 R1. Forged aluminum pistons that use a short-skirt, low-friction design ride in ceramic composite coated cylinders cast into the upper half of the engine cases for increased rigidity and reduced weight. Magnesium crankcase covers shed additional grams. The claimed wet weight is a hefty 310 kg (683 lb).

Camshafts are driven using a combination chain and gear-drive system (a chain drives the intake cams, which in turn drive the exhaust cams by gear), which allows for more compact cylinder heads. The reduced camshaft pitch also permitted the four steel valves per cylinder (adjusted via bucket shims) to be set at a narrower angle, resulting in a shallower combustion chamber, which provides for a compression ratio of 11.3:1, and starting is aided by an exhaust-cam-mounted centrifugal decompressor. Despite 40 percent larger displacement, the narrower V angle and revised cam layout contribute to a 27 mm reduction in front-to-rear engine length. Twin radiators handle cooling, aided by a liquid-cooled oil cooler.

Yamaha incorporates much of its latest techno-wizardry into the V-Max. Carburetors are gone, replaced by YCC-T fly-by-wire closed-loop EFI using 48 mm throttle bodies and 12-hole injectors. The original V-Boost system is gone, replaced by Yamaha’s YCC-I variable-length intake runners that electronically switch from 150 mm below 6,650 rpm to 54 mm above. As we’ve learned with the R1 and R6, this system effectively increases bottom-end torque while providing a noticeable boost in high-end power. It should also contribute to a luscious intake howl on an engine layout renowned for its musclecar growl. A new catalytic-equipped exhaust system incorporates Yamaha’s EXUP valve, which also boosts torque.

Power output has increased substantially, going from the original V-Max’s claimed 138 hp to 197 hp at 9,000 rpm. Massive torque is also available, peaking at a claimed 123 lb-ft (equalling the big twin Yamaha Raider tested elsewhere in this issue) at 6,500 rpm. That power transmits to a not-overly-large 200/50-18 rear tire via a ramp-type slipper clutch and five-speed transmission, and shaft drive is retained.

A lightweight cast-aluminum frame borrows from Yamaha’s superport models by incorporating tuned flex into its design, and is the foundation of a completely revised chassis. Large main frame spars arc over the engine to accentuate the “massive engine’s handsome profile,” as stated in V-Max literature. An extra-long and rigid cast aluminum swingarm reduces the drive shaft’s torque reaction on the suspension, while improving rear-tire grip on acceleration. A smallish plastic fuel tank mounts below the seat in a traditional V-Max manner; its 15-litre capacity should be good for a few quarter-mile passes without having to top up. Its location also frees up space for the large airbox (claimed to contain twice the volume of the previous model), to which air is fed through a pair of distinctive, hand-finished aluminum intake pods.

Chassis geometry is conservative, with the fully adjustable 52 mm cartridge fork raked out to 31 degrees and trail set at a stability-enhancing 140 mm. Wheelbase has grown to 1,700 mm (66.9 in) from the former model’s 1,590 mm (62.6 in.), while the seat rests 10 mm higher at 775 mm (30.5 in). A link-type rear shock is also fully adjustable and features remote dials for each of its three adjustments.

Slowing the mighty Max down is a pair of floating 320 mm wave-style front rotors squeezed by radial-mount, monoblock six-piston calipers, a setup similar to the latest R1, which we’d noted had ferocious braking power. A Brembo radial master cylinder provides the necessary pressure. In the rear, a 298 mm wave-style disc gets by with a single-piston caliper. Yamaha’s latest ABS system (similar to that found on the 2008 FJR1300) adds a measure of safety.

Rounding out the package are a tapered low-rise steel handle-bar and multi-function handlebar-mounted instruments, which include an analogue tachometer, digital speedometer and an all-important V-Max necessity: a programmable shift light. A second multi-function display panel located on top of the pseudo fuel tank shows useful travel information like time, trip meters, fuel level, etc. Also included is an ignition immobilizer to reduce the possibility of ride-away theft.

The new V-Max will be produced in limited numbers, with the 200-250 units available in Canada for 2009 and expected to arrive at dealers in November of this year. Buying the most powerful production motorcycle made, at least according to manufacturers’ claimed specs, isn’t cheap, as the price has been announced at a whopping $21,999—and that is without factoring in the money you’ll need to maintain a fresh supply of rear tires.