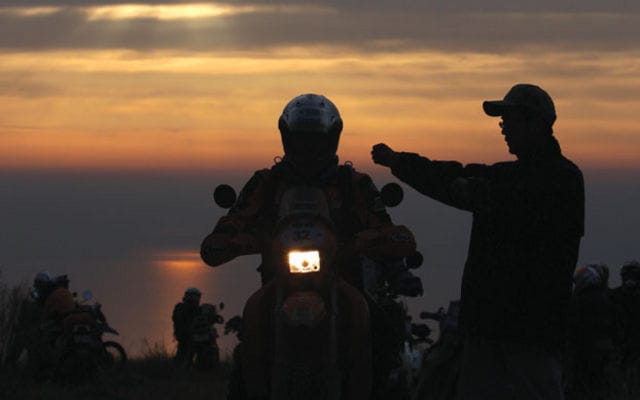 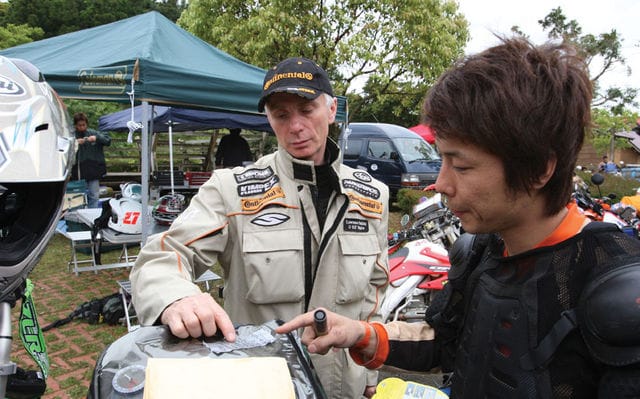 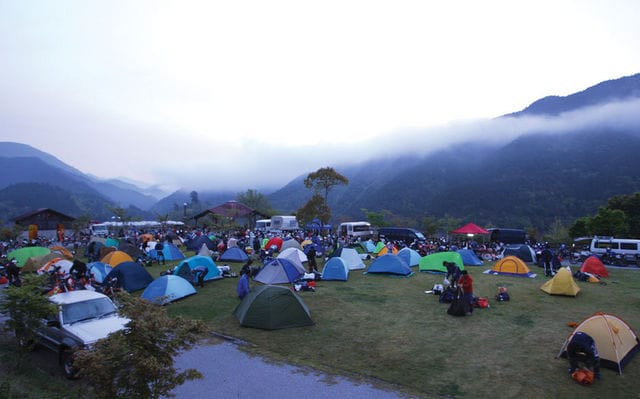 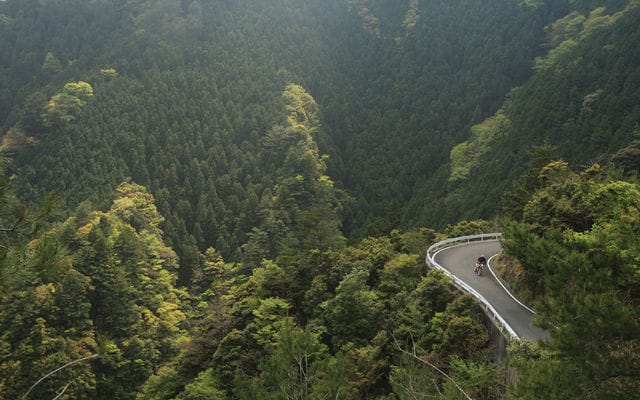 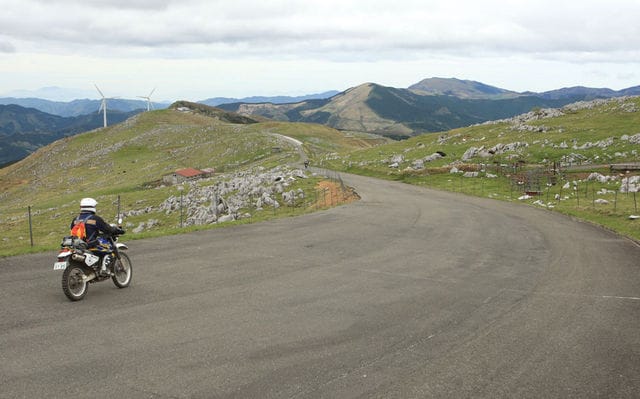 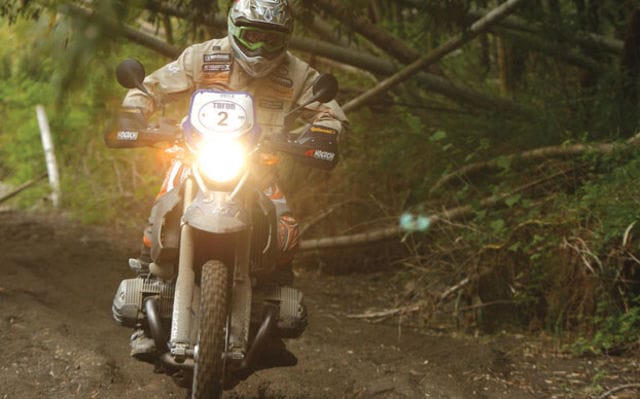 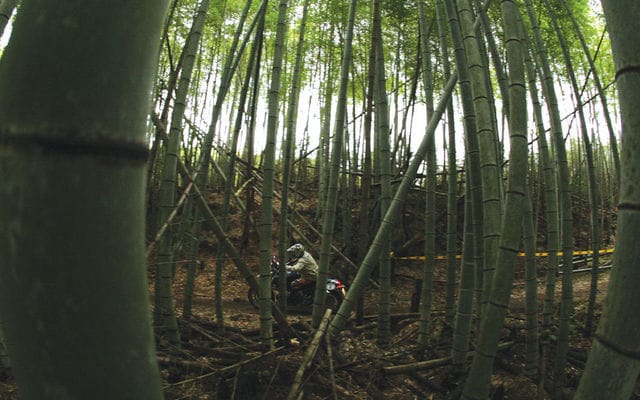 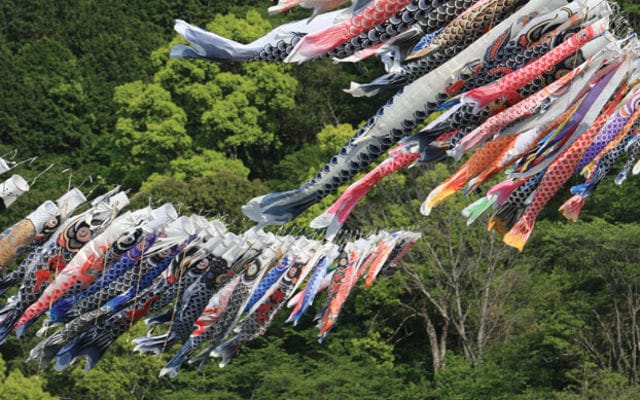 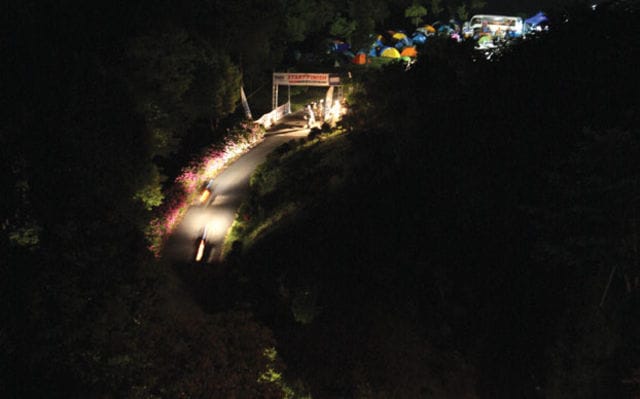 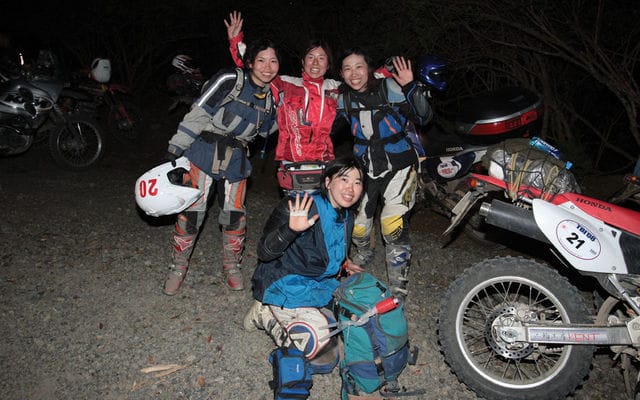 It was almost 10 pm and the BMW HP2 I was riding seemed to have a mind of its own over the ice-cube shaped, sharp-edged rocks that covered the surface. In the inky darkness that surrounded me, there was no predicting where the front wheel would point next. I slowed to a crawl and wobbled through the corners at a painfully slow but sure pace. I was competing in the 20th Tour de Blue Island, organised by Shikoku Super Enduro Racing (sser.org), a rally held in Shikoku, the smallest of Japan’s four main islands.

On this particular evening I was shaking in my riding boots. Not only was it dark, but the course took us along narrow logging roads perched high on mountainsides, lined on one side by sheer rock walls and on the other dizzying cliffs, with no guardrails and no runoff, just a straight drop into the empty darkness. I thought packing a parachute may have been a good idea in case a wrong turn resulted in an impromptu base jump but vigilance persevered and I was pleased to roll to the finish unscathed.

The TBI was held in late April during gata renky, or Golden Week holiday, and people everywhere on the island were camping, hiking, surfing, and riding bicycles and motorcycles. The seven-day rally attracted 120 entrants; two Korean riders and I were the only foreigners. I knew many of the competitors from the two SSER Mongolian rallies I have participated in, so I eagerly anticipated travelling to Japan.

SSER president Tetsu Yamada is dedicated to organizing some ambitious events and is well respected by many in rally circles. “Rally is my life,” says Yamada. A former department store executive, he was introduced to rallying during a business trip to Paris in the 1980s, where he witnessed the start of a Paris-Dakar rally and was hooked. He has competed in the Dakar rally three times and is largely responsible for the popularity of these types of events among Japanese competitors. Many top-level Japanese riders first competed in road-book style long-distance rallies at the Tour de Blue Island.

Yamada’s rally took us through the most picturesque and challenging areas of Shikoku, for a total of 2,582 kilometres, 492 of which were on dirt, and of those, 116 were part of 14 timed special stages, some of which were at night, a first for me. Kiesuke Maeda, one of Japan’s top rally riders, graciously offered to guide me through the intricacies of the rally. I asked if the timed special stages at night were a mistake. “No, no,” Maeda said, “in darkness, yes, yes!”

I was stunned. Racing on these roads at night was crazy. SSER required each rider to carry safety equipment, including a length of rope and a whistle in case you sailed over the edge and needed rescue. Purely in the interest of self-preservation, I backed off on the throttle a bit more during the night stages.

I use the term racing loosely; I spent the first day of the rally fighting off the effects of jetlag and vertigo, and getting accustomed to driving on the left, which caused me to dawdle along the mountain two-track roads, hugging the rock faces and keeping my distance from the edge of the road and the sheer drops beyond. I resigned myself to being a complete tourist when a Honda CRM50 buzzed by me in a cloud of two-stroke exhaust during an early stage.

Among the entrants was 66-year-old Yoshi Sugawara who is a 25-time Dakar rally veteran and was recently inducted into the Guinness Book of World Records for the feat. Sugawara took me under his wing the first day and showed me the art of road-book navigation in Japan. The road book is a scroll of complex instructions based on the distance between points or landmarks, and uses symbols to direct you along the route. It contains so much detailed information that an odometer error of 10 metres can get you lost in the blink of an eye.

There are various classes in the TBI including a women’s division, which was won by Chiho Maruyama on her aging Yamaha TDR250. Maru, as her friends call her, is a mechanical engineer and one of the many professionals who take part in the rally. She does all of her own maintenance and carried a rather hefty backpack full of spares. All seven of the TDR250s entered finished the rally, but keeping the finicky two-strokes running included some serious overnight work.

A full gamut of motorcycles entered the rally, many riders on lightweight dual-sport bikes like Honda CRF230s and Yamaha XT225 Serows. Braver souls showed up on even smaller Yamaha DT50s, Honda CRM50s and XRL80s. An early BMW GS was also on the entry list; my HP2 was among the largest motorcycles entered, both in size and engine displacement. Real enduro bikes were the choice of the more serious competitors.

Mountainous Shikoku is a motorcycling paradise, and the rally took us through some of the most spectacular scenery the island has to offer. The paved roads, some of which were so narrow they’d be better suited for golf carts, were billiard-table smooth and the never-ending succession of corners caused me to shift, brake and twist the throttle more than seemed possible.

By the third day I got comfortable with the BMW’s torque and was getting the most from the Continental Twinduro rear tire, but a puncture in an off-road section at dusk forced a late-day repair. At the bivouac that night I slapped on new tires and staggered off to bed around midnight; I was exhausted from the intense concentration and vigorous riding the rally required, and the 5 am wake-up call was getting close. Aside from the riding and the competition, the Tour de Blue Island was an amazing cultural experience. Shikoku is largely rural and traditional Japanese agriculture occupies much of the scenery. Terraced rice paddies, tiny houses and mini flatbed trucks abound; farmers planted rice sprouts and operated motorized tillers barefoot in the mud. Marine air mixed with the pungent odour of cedar from sawmills and the scent of local flora, accentuating panoramic views for a sensory smorgasbord in this motorcycling Shangri-La.

It seems to me that in Japan people harmoniously integrate architecture into the landscape. Eighty-eight Buddhist temples are scattered about Shikoku and countless pilgrims spend two to three months a year walking to each one on a journey of peace and meditation. Stops during the rally were frequent, and some roadside rest stations offered the pilgrims a soothing hot footbath to ease the day’s journey.

The days were long, Yamada starting with the daily briefing at 5:30 am, followed by a 6 am start. The longest day was 421 kilometres and getting into the bivouac after dark was par for the course. The liaison sections were run through populated areas—in order to keep speeding on the roads to a minimum, checkpoints were set up along the route that had target times when they were open, so showing up early was not advantageous. Riders were given ample time to make the distance, including stops along the way for food and rest (many riders napped during the day).

The TBI is unique in many ways, and listed in the road book were several onsans, or Japanese hot spring baths, which are common in Shikoku. One day I stopped at two onsans, the therapeutic effects of which were amazing. Soaking in the natural mineral water for a few minutes provided relief to aching muscles and rid me of accumulated dirt. Invigorated, I couldn’t help but think that the Tour de Blue Island is perhaps the most civilized rally in the world. Midway through the rally a party was held in the bivouac complete with live music, sushi platters and free-flowing Asahi beer. Despite rain that evening the atmosphere was electric. The social aspect of TBI rivalled the glorious scenery, but it was an early start the next day and everyone called it an evening before midnight.

I had a nap that took too long the following day and I missed the closing of a Control Passage or CP by two minutes and was penalized an hour. My relaxed approach to the rally meant the penalty didn’t bother me but the front-runners were furiously competitive. By the fifth day, KTM-mounted Maeda led the rally by two minutes over Yoshio Ikemachi, who was riding a BMW G650X Challenge. Ikemachi, the winner of the 2007 Mongolian rally, took over the lead during the longest special stage of the rally, which was held at night. It was this stage, with its complex navigation in the darkness that proved Maeda’s downfall; a wrong turn cost him 10 minutes and he sank down the leader board to ultimately finish fifth. It was easy to lose your way during this stage, and one rider racked up 53 kilometres in the 25-kilometre test. I chose to wait for and follow other riders rather than wonder about aimlessly in the forest. Ikemachi won the 2008 TBI, sharing the celebratory Moët & Chandon with everyone and promptly putting his BMW up for sale.

It was my first time in Japan and I learned that the Japanese are highly respectful and more accommodating than I’m used to in North America. I left with a deeper appreciation for this wonderful country and its friendly people. The Tour de Blue Island reaffirmed something I’ve believed for a long time: everyone is equal when their riding gear is on. And The Tour de Blue Island should be on every adventure rider’s to-do list. Don’t forget to tell Yamada-san I sent you.