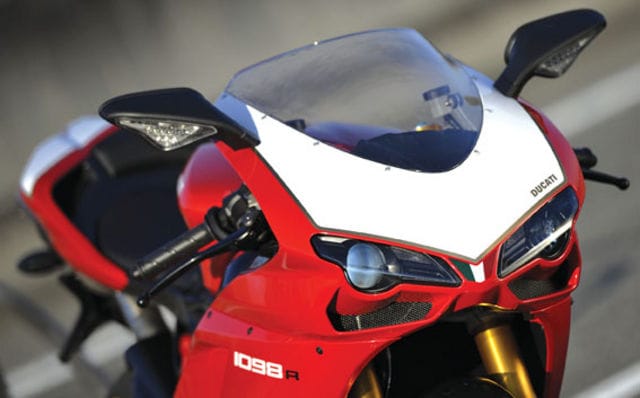 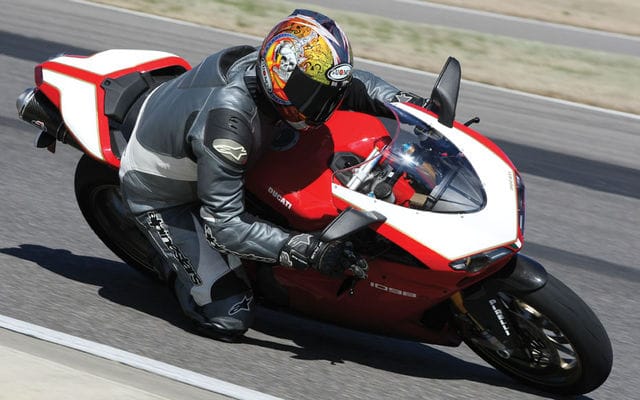 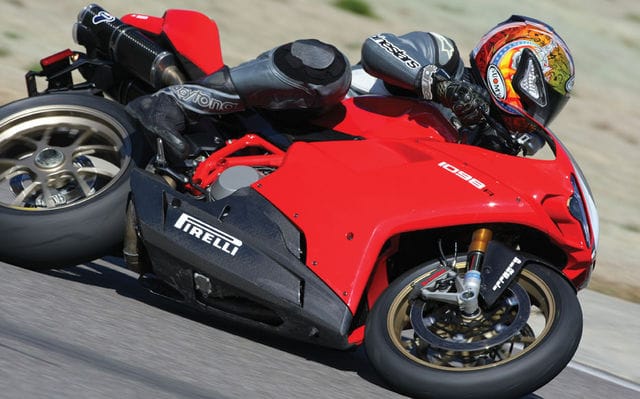 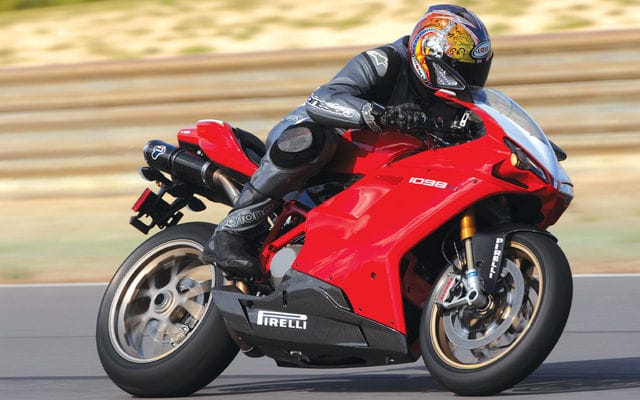 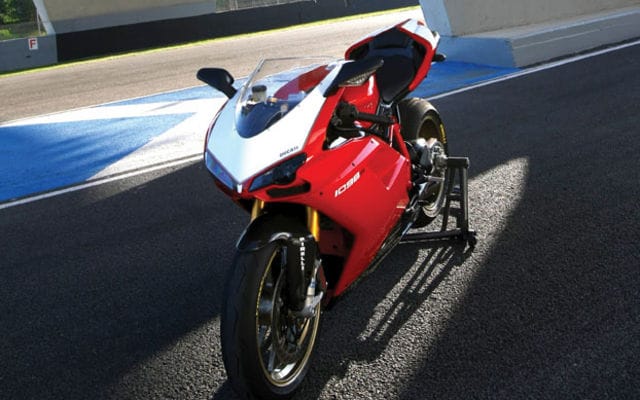 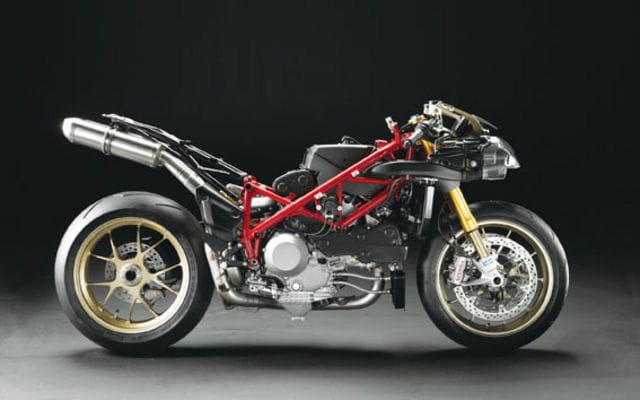 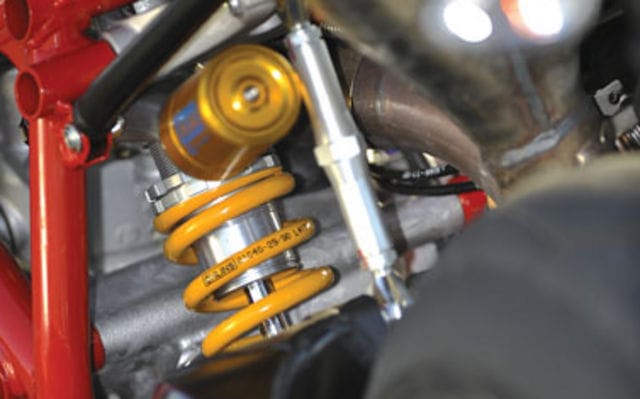 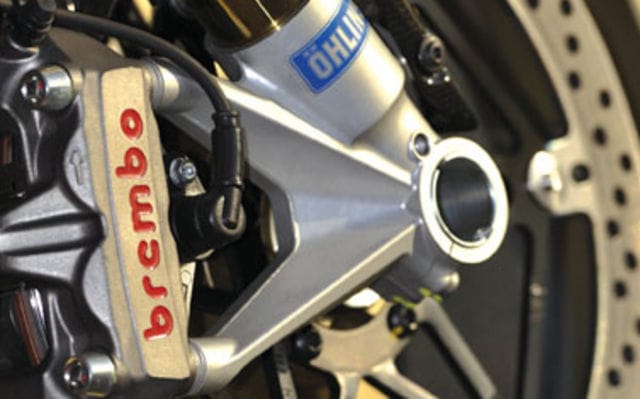 I’ve only ridden a handful of real race bikes: a few Canadian national series’ superbikes and a MotoGP bike. The 1000 cc superbikes were bronco-bucking brutes, bouncing on rock-hard suspensions and trying to catapult me off the high side or loop me over backwards as their 180 rear-wheel horsepower hit the ground in full, unadulterated force. In contrast, the Yamaha YZF-M1 MotoGP machine, a purpose-built race bike with electronic rear-wheel control and a highly advanced suspension, felt as composed as a modern street bike—albeit one with 240 hp.

I can add another high-power race bike to my list, and this one has turn signals. Ducati’s World Superbike-spec 1098R is the machine closest to a race bike you can ride on the street and get away with it. The machine I sample at the North American press launch held at Barber Motorsports Park in Alabama is street legal, but is equipped with a full 70 mm Termignoni exhaust system and race-kit ECU, both accessories included in the bike’s $44,995 price tag. Aside from boosting power from 180 to 189 horsepower (claimed output of the North American bike with the full exhaust; European bikes include slip-on mufflers and claim 186 hp), the race kit ECU includes Ducati Traction Control (DTC).

DTC is not an ignition-retarding system that softens power if the engine revs too quickly while in gear, like on the ZX-10R or certain BMW models; it is an active traction control system that reads front and rear wheels speed, throttle opening, engine rpm and other parameters, and cuts power to the engine when wheelspin is sensed. This system differentiates the 1098R from any other production motorcycle available including Ducati’s own $85,000 Desmosedici RR—probably to the chagrin of buyers of the rare V-four MotoGP replica.

From a distance it’s hard to tell the R from the standard 1098, but up close a keen eye immediately sets upon the roughly finished sand cast engine cases and high-end Ohlins suspension components. Bodywork is made from carbon fibre. Inside the engine cases are parts usually reserved for race teams, including a lightened and polished crankshaft, and titanium connecting rods and valves. Bore and stroke are increased to 106 x 67.8 mm (104 x 64.7 mm for the 1098), allowing the 1098R a full 1,198 cc displacement, putting it just beneath the recently mandated 1,200 cc limit for twins in AMA and World Superbike championships. According to Ducati, the 1098R engine is so close in specification to the WSB race engine that the only differences in the latter are two-ring pistons (three rings for the 1098R), a re-balanced crank, a lighter flywheel and different gearbox ratios.

The Ohlins suspension is not typical of that used on previous high-spec -Ducatis. Up front is a fully adjustable 43 mm inverted fork with titanium-nitride coated sliders, and at the rear is the latest TTX shock absorber that uses twin internal tubes that completely separate compression and rebound damping adjustments, allowing more precise tuning and reducing oil cavitation, which keeps damping rates constant even with hard use.

Because of its high price and rarity (only 300 are coming to North America), there are only three 1098Rs at this press launch, as well as a couple of standard 1098s for comparison. Firing up our test bikes produces a luscious V-twin sound, which despite the accessory exhaust, isn’t obnoxiously loud. After a warm-up session aboard a standard 1098, I hop onto the R and immediately notice its firmer suspension, lighter weight and eagerly revving engine. The lighter internal components reduce rotating mass, making the 1098R engine snap at the slightest blip of the throttle. On my first few laps, I become accustomed to the controls, as they need a delicate touch. Throttle response at lower speeds is razor-sharp, and the Brembo mono-block calipers grip the huge 330 mm front discs with ferocity; a sloppy right hand easily gets the 1098R out of shape through slower turns.

Gearing is overly tall to meet government emissions requirements, so at this relatively tight track, only the bottom four gears are used. Acceleration is nonetheless brutal, but more controllable at speed than on an open-class Japanese supersport. The powerband is much broader, coming on very strong from about 4,000 rpm and building rapidly to 10,500 rpm where the rev-limiter kicks in. This is the most powerful twin-cylinder motorcycle I’ve ever ridden, and easily matches a 1000 cc supersport in acceleration.

All the carbon bits, the exclusivity and the appealing sound are nice, but the thing that has me stirred is the traction control. Riding a 180-plus-horsepower motorcycle is very intimidating, and anyone who’s ridden one hard on a racetrack knows that these machines are not very forgiving, especially at corner exit, where the throttle needs to be feathered by an expert hand. As I pick up speed on the R, I don’t notice any difference in its behaviour compared with a regular motorcycle. The DTC has eight levels of effectiveness for different riding conditions and rider skill; the lower the setting, the more rear wheelspin is needed before the engine cuts. The number 1 position is meant for a highly skilled rider on a dry racecourse and permits the most amount of wheelspin, and the most intrusive number 8 position is meant for wet conditions. It was suggested that we set the DTC in the number 5 position for our testing, though we’re invited to try other settings at will.

It takes a while to get accustomed to this system. I remember the trepidation I’d felt the first time I squeezed the front lever hard on an ABS-equipped bike. Years of avoiding front-wheel lockup—and the ensuing disaster that awaited if it did—had trained me to use the front brake cautiously. Placing trust in electronically controlled rear-wheel traction is much harder to do, especially since the result of too much throttle while leaned over is a highside. It’s only after trying the DTC in the number 8 position that I realize its effect. On a dry track, the engine sputters with moderate application of the throttle on corner exit, and acceleration is subdued. This reveals something I’ve always observed while following a bike on a racetrack: the rear wheel spins much more than we think—otherwise the system wouldn’t activate.

This demonstration gives me the confidence I need to feed the gas harder when I revert to the number 5 position. I then learn another thing: I can apply the throttle much harder than I usually do when riding at a very fast racetrack pace. In the pit area, other journalists talk about the controlled slides they’re regularly experiencing, while I have yet to kick the rear end out in a controlled McCoy fashion, the engine occasionally sputters, but the rear wheel stays behind the bike. Of course it does—that’s what DTC is all about. A good indication that my seat-of-the-pants impression isn’t far off the mark is the comment made by former AMA Superbike champion Scott Russell, who is also riding with us: “I didn’t feel a thing. It feels normal to me.”

Twisting the throttle harder and earlier exiting turns allows me to better appreciate the DTC experience. At a quicker pace, the engine sputters more frequently, so I return to the pits and switch to the number 4 position, which allows the DTC to kick in only a few times during my 15-minute session. When it does, the rear end squirms on the edge of traction but I stay on the gas. The rear end bites harder than I thought possible and I rocket out of turns faster than I’ve ever done before, but I’ve reached my personal traction-control limit and refrain from turning the throttle even harder. With time in the saddle, I’d probably get accustomed to the less intrusive settings and learn to better control the bike with the rear end sideways.

I do attempt a session in the number 2 setting, a setting others claim is the best, allowing tire smoking slides, but I witness none of these at the track and to me, the bike feels quite normal; I just don’t nail the throttle hard enough to get the rear tire to slide enough to activate the system.

The entire last session is done in the number 4 position, which prompts me to ride harder than I usually do, with confidence. The engine sputters coming out of the slower turns and I focus entirely on steering the bike. Driving this hard out of turns requires a higher level of concentration than normal, but I begin to understand how top-level racers ride the way they do. Probably only a handful of racers worldwide have the capability to control a high-speed rear-wheel slide exiting a turn—guys like Rossi and McCoy. The throttle modulation necessary to keep the rear wheel spinning smoothly at the edge of a highside is just not possible for average riders. This is where electronic intervention makes the difference. It won’t make you a better rider, but you will be a faster rider.

A $45,000 motorcycle is certainly a luxury, and anyone contemplating buying a 1098R probably owns other, more practical machines already. If you do buy one, don’t even bother licensing it for the street; pull off all the street hardware, shorten the gearing, plug in the included Ducati Data Analyser telemetry recorder and attend as many track days as possible. You can gradually work your way through the different levels of traction control until you find the level that suits your riding style; it’s the closest you’ll get to the real deal without having to win a string of championships.

Bang for the Buck Features

Here’s what you get for a bike that costs 125 percent more than the base model: