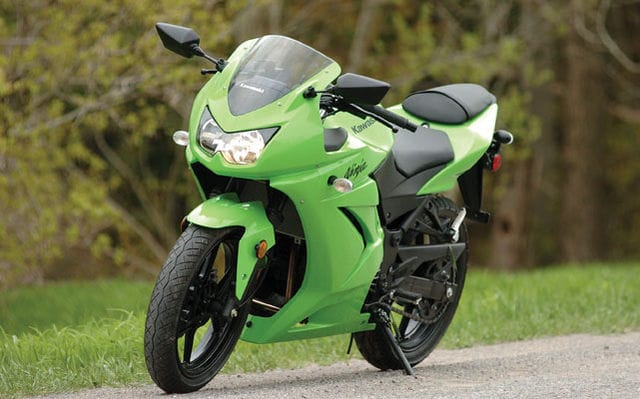 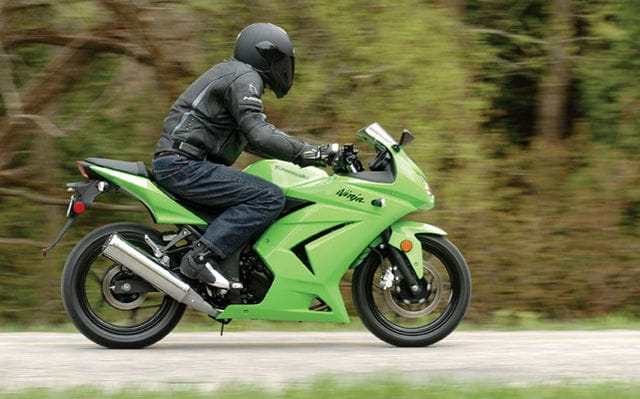 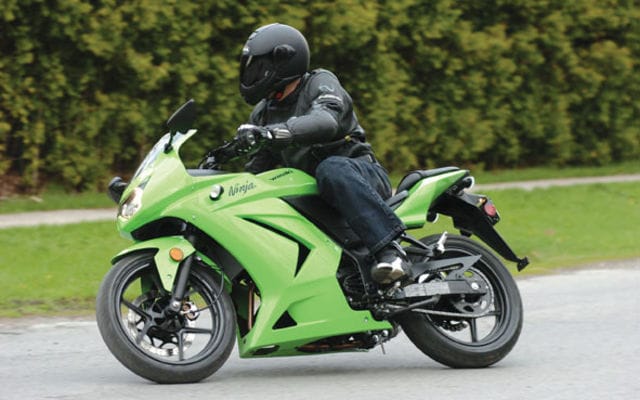 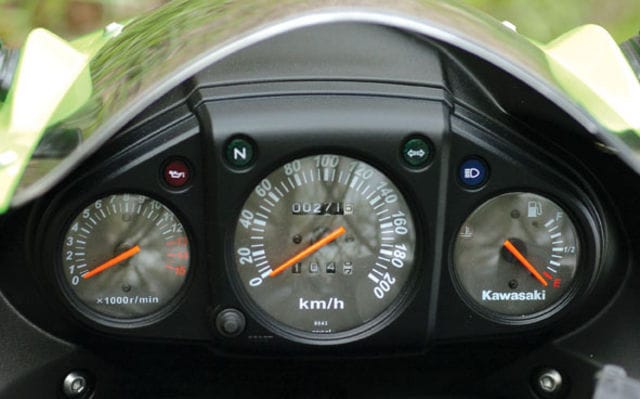 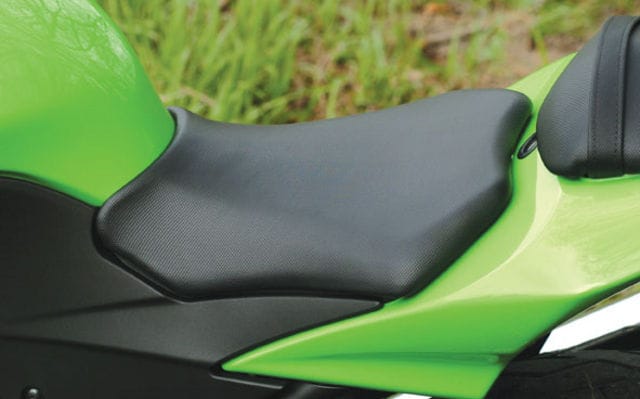 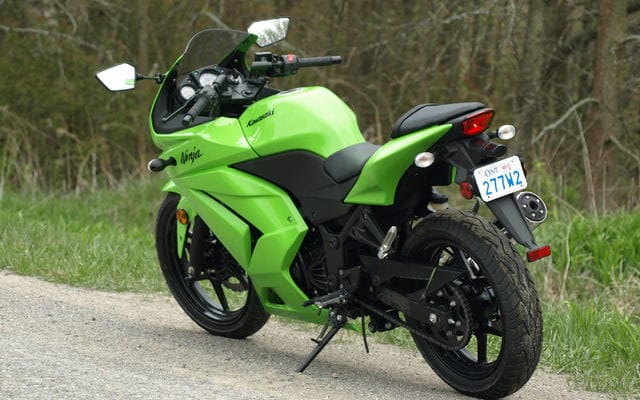 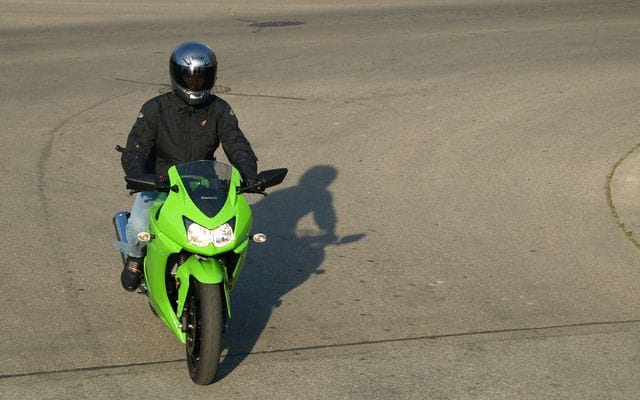 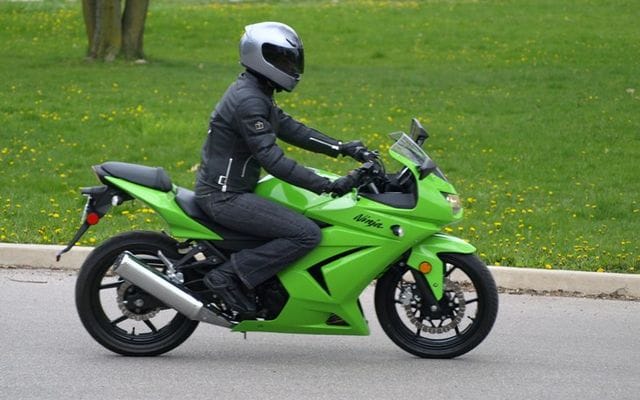 Letters to this magazine fall into fairly predictable categories. There is criticism, praise, a dash of outrage and a subtle but discernable lament for what has passed. Our predominantly middle-aged readers, with more years behind than in front of them, are responsible for the nostalgic bent, but the melancholy is not without merit. Motorcycles have become too big, too expensive, too fast and too specialized. If, as one letter writer from Ontario queried, the speed limit is 100 km/h and 150 km/h lands you a fine of $10,000 and the immediate impoundment of your motorcycle, what good is a 250 km/h machine? Often we’re at a loss to answer these questions, but Kawasaki gives us a response in plastic, rubber and steel: what if less is more?

A couple of testers for a motorcycle magazine should know better, but after wrapping up a photo shoot in failing light an hour outside the city we realize that we only have darkly tinted visors. Hopping on the highway we bolt to the fast lane and pass an uphill row of transport trucks before settling into the right lane at a steady cruise of 140 km/h. Halfway to the city, at about the time we realize that we’re going to make it before nightfall, it dawns on us: We’re riding a 250 cc lightweight that costs $4,249.

Kawasaki’s 250 Ninja, while updated for 2008, is not a new model, but there is something about the revision that transcends manufacturer hyperbole of boosted torque or slashed weight. What’s different is that it is not a motorcycle that’s embarrassing to ride. Small displacement motorcycles have traditionally looked wimpy—even your grandmother knows that Kawasaki’s Ninja 500 and 650 are Ninja in name only, and not descendants of the track-friendly ZX-6R and ZX-10R models. But the 250 is so cunning a copy of the ’08 ZX-10R that it very nearly fools everyone. It’s not scaled down to match its engine displacement, and is closer in physical dimensions to a 600 cc machine.

Giveaways, of course, are the skinnier tires (110/70 front and 130/70 rear, but they’re on 17-inch rims like the big bikes) and single front disc brake, but the proportions are just right, and even a six footer in the saddle doesn’t loom over the machine like a gorilla on a tricycle. And without a “250” logo anywhere in sight, onlookers are reluctant to believe that it’s that small. And the cars on the highway that we blow past likely wouldn’t believe it either.

For 2008, Kawasaki claims that 70 percent of the engine is new and admits that changes were made in the search for midrange power. The compression ratio was dropped from 12.4:1 to 11.6:1, the four-valve heads received slightly smaller intake and exhaust valves and the camshafts are of higher lift and longer duration, all, according to Kawasaki, in the quest for elusive low-end grunt. The engine produces an accommodating 32 horsepower, with torque peaking at 16 lb-ft, but Kawasaki claims a 30 percent increase in midrange power.

After a lengthy warm-up in cool weather (for reduced cost the 250 has twin 30 mm Keihin carburetors, unlike the fuel-injected European version), it is easy to appreciate the changes. At a casual pace, power at low revs is soft but entirely sufficient for keeping pace with urban traffic; indeed it is hard to imagine even the most timid of beginners finding power too abrupt below 4,000 rpm. But when you really need to make haste, to jump to the front of the queue at a stoplight or while merging with quickly moving highway traffic, rolling on the throttle from low revs results in a lethargic lack of gumption. It isn’t until 5,000 rpm that acceleration becomes brisk, with another step up again as 6,000 rpm is passed. It takes a little getting used to, especially if you’re coming off a slow-turning cruiser, but the higher the engine revs, the happier it becomes.

Small capacity engines, especially if they’re singles or twins, are often hampered by coarseness at high revs, but the 180-degree parallel twin in the Ninja is a gem. It sounds like a well-muffled race engine, with charismatic exhaust growl and intake howl. Vibration is entirely liveable at any engine speed but decreases as revs rise. At 120 km/h indicated revs are just shy of 9,000 rpm, with the soles of the boots receiving just a hint of tingling. At 10,000 rpm the engine hits a sweet spot and noise and vibration virtually disappear, which results in the most astonishing scenario—easy 140 km/h cruising from two pistons the size of espresso cups.

For those fearful of sport bike riding positions, there is no need to fear the Ninja 250R. Just like Honda’s CBR125R, the Ninja cleverly wraps sport bike styling around a standard riding position. If you’re a novice and have been weaned on a cruiser, the footrests-under-the-saddle riding position may seem odd at first, but it’s the best position for your body to control a motorcycle. The foot-forward cruiser riding position is fine for watching television but immediately loses its appeal once you’re moving, as the legs are unable to counterbalance the force of the wind and relieve shocks from the lower back while traversing bumpy terrain.

Handling, as you might suspect, is sublime on the 250. The enemy of agility is weight, and at a claimed 151 kg (333 lb) the Ninja is as much fun to bend around a corner as it is easy to shuffle around the garage. We tend to spend much of our time on larger motorcycles, and until we became acclimated, we nearly always turned into corners too early, as cornering has less to do with applying pressure to the handlebar than it is a mental exercise of merely looking where you wish to go.

Agility is one thing but ride quality is another, and the Ninja’s budget suspension components reveal their weaknesses on scarred roads. The non-adjustable fork has firmer settings than the old model and the shock is five-way spring preload adjustable, and rough-road compliance can be best described as lively. The good news is that the Ninja feels very solid (aided by a larger box-tube swingarm and a beefy steel frame cleverly disguised to look like the aluminum frame of the ZX-10R) and handling is not super-sport twitchy, despite one-degree less rake, at 26-degrees, and a compact 1,390 mm (54.7 inch) wheelbase. But with an upright riding position and the agility of a cat tiptoeing around a puddle, avoiding the worst potholes is easy.

The single 290 mm front disc with two-piston caliper looks frail but is sufficient for the task without being beginner-terrifying overkill. A clever aid in the hunt for neutral, as on all street Kawasakis, is a positive neutral finder; while slowing to stop, downshift to first and then lift up on the shifter and you find neutral every time, without the maddening dance between first and second. Another useful addition is a proper fuel gauge and not just a reserve light, and the only thing that’s missing from the dashboard is a gear position indicator.

Even for six-foot, 185 lb testers the riding position is comfortable, though the seat padding could be a little more generous. With an aftermarket seat (rest assured, they will arrive), long distance comfort should be fine, and for each inch less inseam range will increase exponentially. Wind protection is surprisingly effective for so small a fairing, and the steel fuel tank is magnetic tank bag friendly, though our bag marred the paint, the first time it has done so.

Motorcyclists are curious people. In cold, rational conversation they claim that they want a motorcycle like this, but something peculiar happens when they enter a showroom. Lust overtakes need, and suddenly too big, too fast and too expensive becomes palatable. But that may be changing. The success of Honda’s CBR125R last season showed that there are motorcyclists lurking in the shadows who appreciate a less expensive, less ostentatious way to travel. The only flaw in Honda’s plan was that it has failed to follow up on the 125’s success with a machine for the next step—but Kawasaki, with the 250 Ninja, has made that motorcycle, and the step between the CBR and the Ninja is less than $1,000. Not surprisingly, dealers in Quebec and Ontario quickly sold out of the diminutive Ninja.

With the disdain we’ve shown for small displacement motorcycles in the past we almost don’t deserve a bike as good as the 250 Ninja. If it was ours, we’d take it to track days and embarrass timidly ridden 600s in the slow class, encourage a loved one to ride, use it to commute and thumb our nose at gasoline prices gone crazy. And at the price they’re asking, we should all have one in our garage.

When you do this job, people ask what new motorcycle you’d buy if you had to spend your own money. Nobody really wants your opinion—they just want you to say the name of whatever they’re riding—but here it is anyway: I’d buy this bike.

Since most of my disposable income is disposed of elsewhere, spending $15,000 on a motorcycle is just not something I would do (although I’m very happy that many of you continue to buy the fine products fairly reviewed in this magazine, because without your support I’m unemployed).

With the Ninja 250, I tore through the gearbox and bounced the engine off the rev limiter like I’d just been sprung from jail, and it is, as many small machines are, much more engaging to ride at near-legal speeds than machines three or four times the displacement. And while I don’t have a problem with skinny tires and small engines, if you’re struggling with downsizing just use this line: It’s my spouse’s machine. —Neil Graham

I wish this 250 was available when I wanted to buy my first bike. The latest version of the smallest Ninja is a real motorcycle. Lighter, faster, and more agile than anything comparable in my day, it’s a sheep in wolf’s clothing.

With a deceptively upright seating position, the Ninja will inspire confidence and ease control, and more experienced riders shouldn’t feel excluded from enjoying the 250 as well, especially in an urban setting, where it is a fun bike to ride. However, they will need to get used to keeping the motor revving at a high rate to get the most from its small displacement.

Beginners considering the Ninja should know this: starter bikes designed to look like sport bikes come with hidden costs, as they don’t tolerate the small shunts typical of new riders. Plastic body panels are the first to go and their replacement increases running costs. In the 1970s we got away with using a mallet and vice-grips to repair damage caused by inexperience, but with the Ninja, you’ll need a few rolls of lime green duct tape. —Uwe Wachtendorf