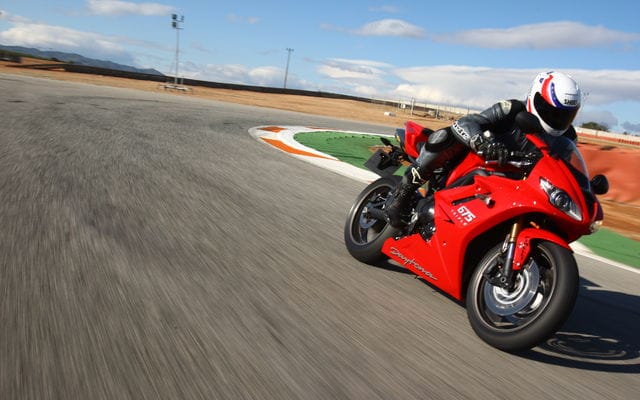 It took Triumph a few attempts before getting a supersport machine right, but when the British bike maker hit the mark with the Daytona 675 three years ago, it produced one of the best-balanced sport bikes available.

The Daytona 675 is responsible for introducing many riders to Triumph (78 per cent of Daytona 675 buyers are new to the brand), and any manufacturer would understand the significance of such a model, especially since it isn’t what would be considered an entry-level bike. Triumph engineers believed the bike was so good, they determined revolutionary changes weren’t needed for the first evolutionary upgrade of the Daytona 675. Why mess with a proven design?

I’m in Murcia, near the south eastern coast of Spain for the press launch of the 2009 Daytona 675, where I spent a day lapping the tight Circuito Cartagena, and a second day riding even tighter mountain roads in the region. I’m grateful the new bike is very similar to the original 675, which I instantly liked when I first rode it—this one’s just a bit better. It has easy-handling and torquey engine characteristics that inspire immediate confidence, and even testers that hadn’t previously ridden the 675 were raving about its ease of control, and balance of stability and quick, neutral steering.

Triumph boasts more than 50 changes for the 675, though they are subtle improvements and not radically redesigned components. The most notable changes are a new nose, suspension upgrades including addition of high-speed compression damping adjustment, and revisions to the engine and EFI mapping that boost power (peak is now 126 hp from 123 hp) throughout the rev range while softening throttle response at low rpm and small throttle openings. The bike also gains monobloc front calipers, loses 3 kilograms, and topping the list of desirable new features is a $1,200 reduction in price to $10,799.

You can find out more about the 2009 Triumph Daytona 675 in an upcoming issue of Cycle Canada.