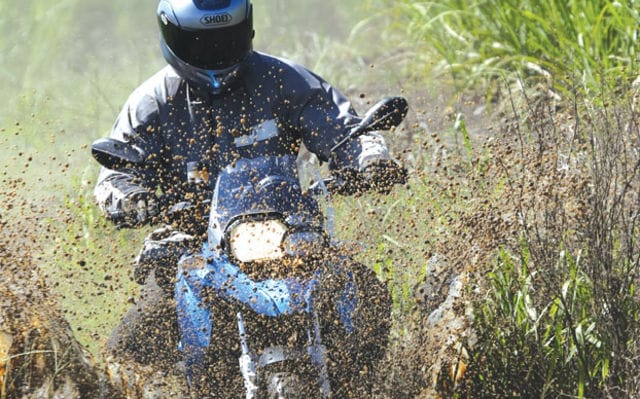 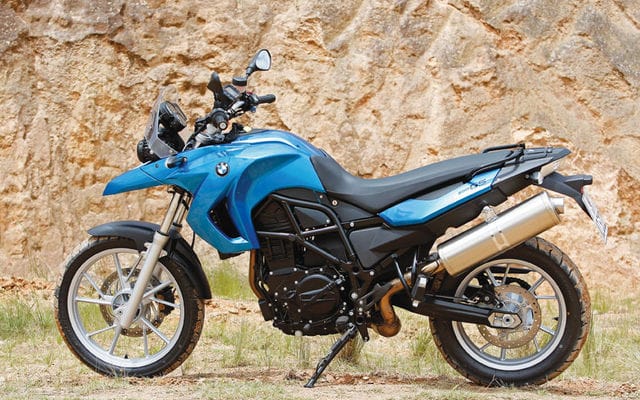 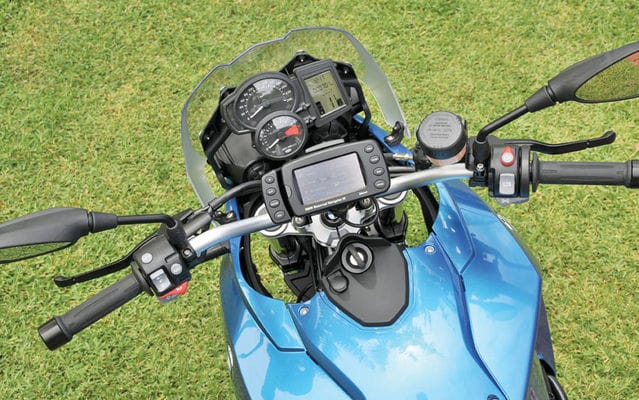 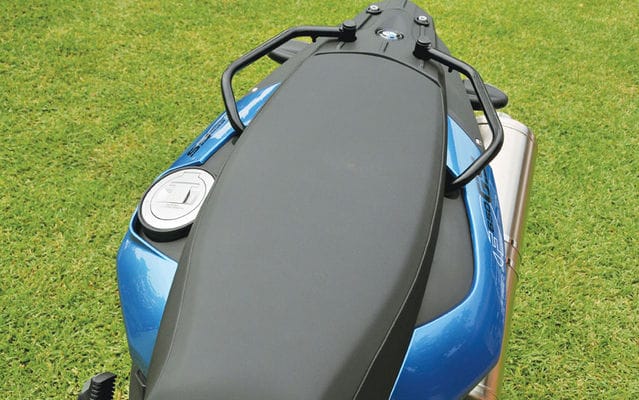 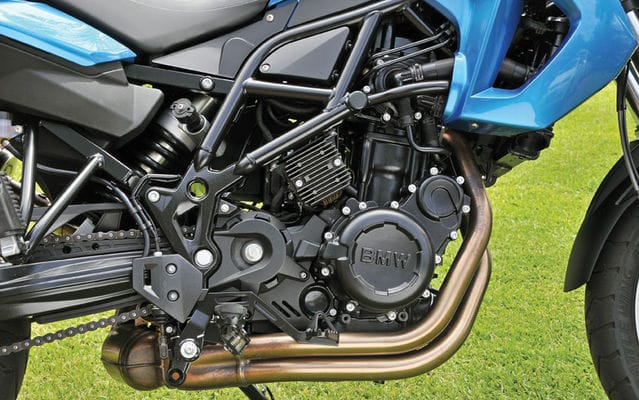 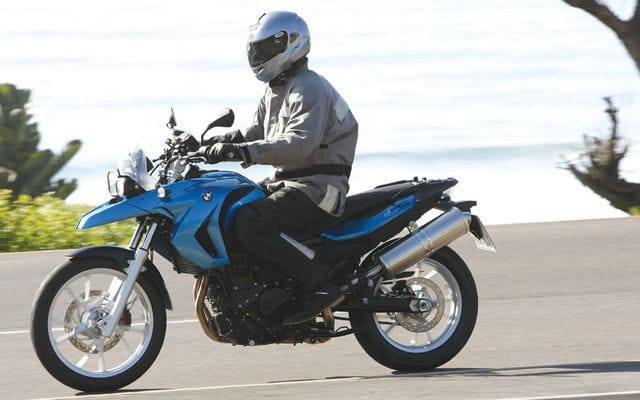 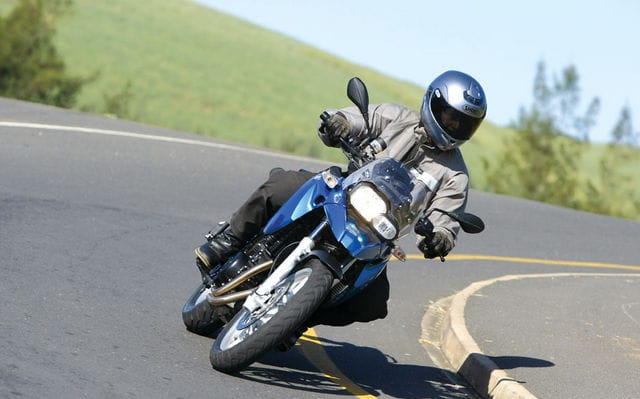 For the answer, you need only look at the popularity of the old single-cylinder F650 with women and with those slight of inseam. In BMW’s view the moniker “650” meant more than just displacement; it meant a motorcycle that was easy to handle and one that didn’t scare beginners. Start calling it an 800 and maybe some customers would flee to other manufacturer’s machines. So BMW decided to call it a 650 and hope that potential buyers will try before they buy.

At the Durban, South Africa launch of the F800GS and F650GS, riding time on the F650GS is reserved for the second of the two-day launch. But crawling out of bed on the second morning, my muscles are sore and my enthusiasm for things two-wheeled is low. BMW had, for the F800GS, laid out a rigorous ride with a particularly challenging off-road section. The 800 and I lost track of each other on a few occasions, but adrenaline and fear of humiliation in front of colleagues suppresses the pain of falling—at least until the next morning, when crawling out of bed in the privacy of your room can be done at a glacial pace.

I’m hoping for a gentle ride and an even gentler motorcycle, and today both wishes will be answered. The platform for both parallel-twin GS models is nearly identical, but it is hard to imagine two motorcycles with so different a mandate. Where the 800GS was designed to be a worthy stable-mate to the perennial favourite R1200GS—perhaps one of the most versatile adventure-touring motorcycles—the 650GS was intended to be a gentle beginner’s machine; that’s quite a range to cover.

Visually the 800 and 650 appear entirely different, which is surprising since the two have virtually identical bodywork, but where the 800 goes black and macho, the 650 is restrained and subtle. The black wheels of the 800 are silver on the 650, and a single front disc hints at the lower specification of the price-point-sensitive machine. Gone, too, is the dark grey or black and yellow livery of the 800, replaced on the 650 with silver, red or blue.

Throwing a (tender) leg over the seat, BMW would be pleased to know that the F650GS indeed feels like a 650 single. It is as thin through the midsection as the F800GS, but a smaller diameter front wheel (19 inches vs. the 800’s 21-inch) and shorter-travel suspension (50 mm less in front and 45 mm less at the rear) contribute to lowering the seat from the 800’s 880 mm (34.7 in) down to 820 mm (32.3 in). At nearly 2 1/2 inches it’s a sizeable difference, and it completely changes the complexion of the machine. Instead of a high-in-the-saddle perch as you thump over rocks and hover above cars the F650GS has a tucked-in feel, with the machine’s weight low and easily manageable.  While mechanical specification between the 800 and the 650 are nearly identical, the 650’s engine is detuned, producing 14 fewer horsepower. It should make for a motorcycle with a considerably different sensation, but perhaps I’m just too knackered to notice, as the 650 doesn’t seem wanting for power, and allied with taller overall gearing (one extra tooth on the engine sprocket and one less tooth on the rear wheel) the 650 is a surprisingly competent freeway flyer. Unsurprisingly, the detuned mill has a less frenetic feel, and it perfectly suits its mandate as a kindler, gentler engine.

There is no off-road pretense on the 650. A shorter 41 mm telescopic fork replaces the F800GS’s 45 mm inverted fork, and tires wear a less-aggressive tread pattern. So there is no rational explanation for my dramatic splash through the mud in front of the photographer other than that I was bored and overheated from repeated photo passes in muggy 30-degree weather. Proper tires or not, a moderate weight (179 kg/395 lb) motorcycle can handle most situations with ease, and back road confidence is only a tire-swap away.

The rational seating position that lends good off-road control to the 800 also creates an ideal rider/machine interface on the 650. Footpegs are low and directly beneath the rider and the steel handlebar meets the hands of the rider with a gentle bend, and leg-reach to the ground is aided by the slimness of the machine. Clutch and gearbox action is flawless and the single front brake is unlikely to intimidate even the most tepid of newcomers. While experienced riders would appreciate an extra disc, BMW’s excellent anti-lock braking system (an $850 option) means that in an emergency there is no need to deftly modulate stopping power—just squeeze for all you’re worth and steer away from the deer.

A BMW just wouldn’t be a BMW if there weren’t a dizzying array of accessories available, from saddlebags (with a claimed load capacity of 67 kilograms) and top case, to skid plate, heated grips and trip computer (including a tire pressure indicator). Even as an entry-level machine, it’s easy to outfit your 650 as a commuter or even a tourer. Very short riders can rejoice, as BMW offers two no-cost options that lower seat height. A low seat drops seat height to 790 mm (31 in.), and a suspension lowering kit (including the low seat) drops that an additional 25 mm to 765 mm (30.1 in.), getting the 650 close enough to cruiser seat height to satisfy most riders. The lowering kit negates the optional $170 centre stand.

There seemed something disingenuous in BMW branding a 798 cc motorcycle a 650, but after riding it for a day I understand their concerns, even if I don’t endorse the principle. Motorcycles are not easy to ride, something that those of us with experience struggle to remember, and 800 cc can sound large to a novice, even if it doesn’t seem to dissuade neophyte cruiser riders. So here’s the skinny: if, with a little experience (on, say, Honda’s CBR125R, Kawasaki’s Ninja 250 or any number of equivalents) you’re ready to move up, don’t be intimidated by displacement—this is as easy to ride a motorcycle as I’ve ridden. It seems lighter than its quoted weight and is without the vices that terrify newcomers. Best of all, the price is a very competitive $ 8,990, and more choice for newcomers to motorcycling can never be a bad thing, especially when it’s a bike as ingratiating as the F650GS.

A high-tech engine for low-tech riders, BMW introduced the F-series parallel twin in the F800S and F800ST models two years ago. The engines are manufactured by the Austrian firm Rotax and are relatively high-performance engines. Combustion chamber and port shape are borrowed from the transverse four-cylinder K1200 engine, which claims 167 horsepower. So, what does BMW do to make the 798 cc twin beginner friendly?

The 360-degree crankpin, 82 x 75.6 mm twin is already an easygoing engine, with a broad, flat powerband and smooth operation via a unique vibration-reducing counterbalancer, which uses a balance-correcting connecting rod that is located on a third crankpin between the piston connecting rods, is offset 180-degrees from its opposing crankpins and is connected to a rocker arm. But for confidence-building, low rpm torque, BMW uses altered cam timing, with reduced duration, valve overlap and valve lift (intake and exhaust valve lift is reduced from 9.64 mm to 7.2 mm), and altered fuel-injection mapping. These changes reduce raw emissions, so the F650GS does not require the emissions-reducing secondary air system that is part of the F800GS exhaust system. Both machines are equipped with a catalytic converter.

With the aforementioned changes, claimed horsepower falls from the 800’s 85, down to 71 for the 650, which is still significantly more than the older F650GS single’s claimed
50 hp. Torque also takes a hit, down from the 800’s 61 lb-ft to 55 lb-ft, though the 650’s torque peak is at 4,500 rpm versus 5,750 rpm for the 800. In other markets, a specially designed throttle valve reduces power to an anaemic 34 hp for beginning riders with graded driver’s licences.