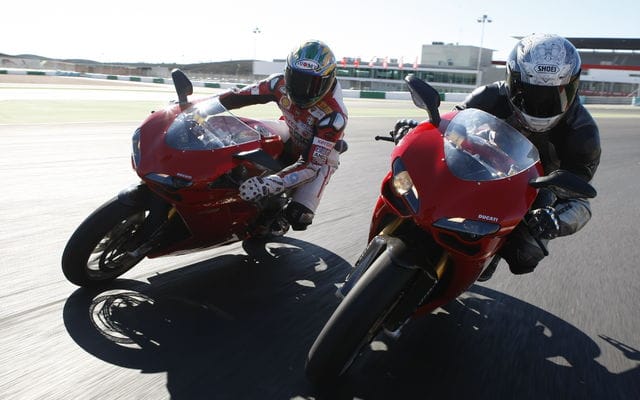 It was fortuitous timing that the track that Ducati chose to launch the new 1198S, just last week, was the Autodromo Internacional do Algarve circuit in southern Portugal, which hosted the last race of the 2008 World Superbike championship. Ducati could not have known it at the time, of course, because press launches are planned long in advance, but both races on the Superbike weekend were won by retiring star Troy Bayliss, who had earlier clinched the championship. So it was a fitting place to launch the next step in the evolution of 1098. But that’s not all.

Joining journalists on the track was the man himself, Troy Bayliss. He may be retired but the Portamo races were only a week ago, so the man had lost none of his form. Had it not been for the logo-covered leathers I would not have recognized the blur that shot past me with such alarming rapidity that I gasped aloud in my helmet. Watching Bayliss on television is one thing, but to be passed by him at speed is such a sobering experience that I can’t even think of a clever metaphor to describe it.

But so much for Bayliss, what about the bike itself? It’s a gem, and here is the thumbnail sketch. With bore and stroke that matches last year’s $45,000 1098R (which is, confusingly, 1198 cc) the 1198S is Ohlins suspended and, like the 1098R, comes with traction control. Electronic control is certainly the next frontier for sport bikes, and after a day at the track I fully support the movement. With a claimed 170 hp at the crankshaft, a rider is wise to feather the throttle while heeled over exiting a corner—well they used to have to be wise, but if you can wrap your head around opening the throttle early and vigorously (which is not an easy thing to do—it takes the mind time to trust the gadgetry) you can get to the next corner sooner than you ever thought possible. For full details you’ll need to check out an upcoming issue of Cycle Canada magazine, but if you want to be the king of track days start saving your money now.