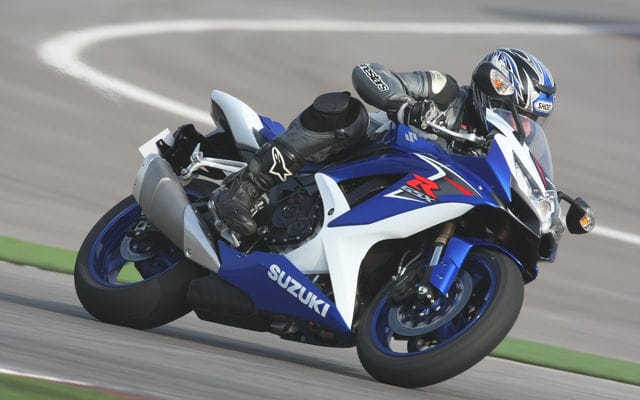 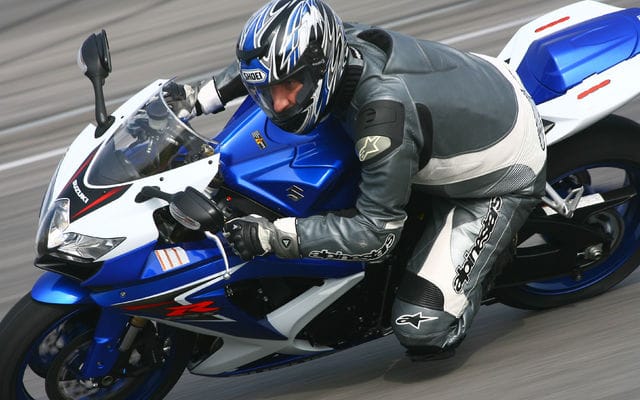 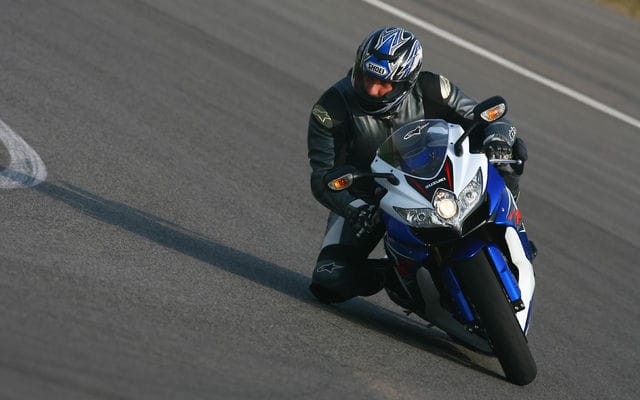 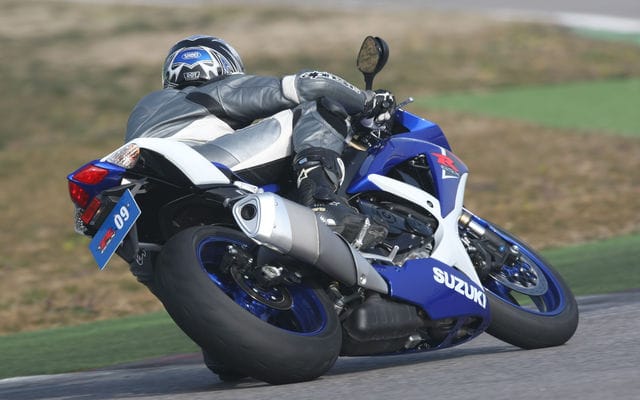 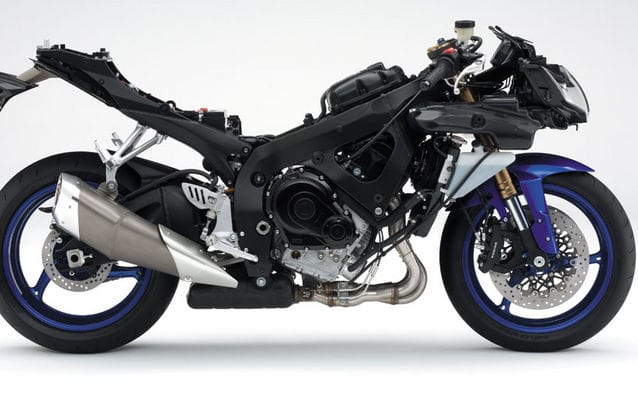 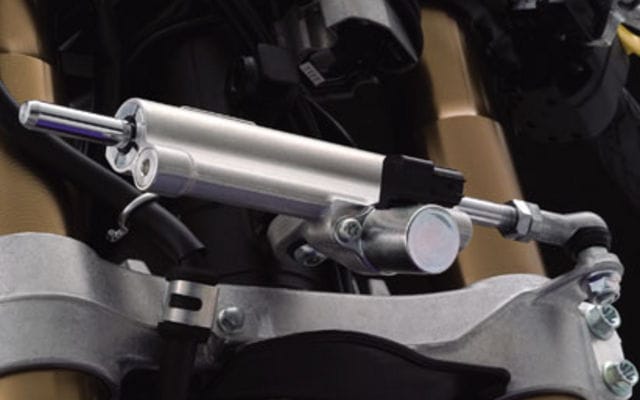 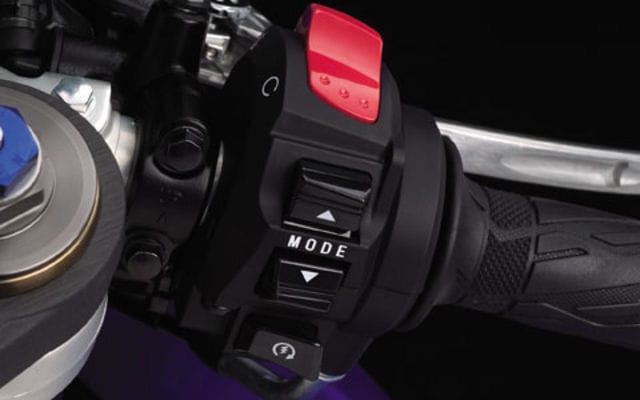 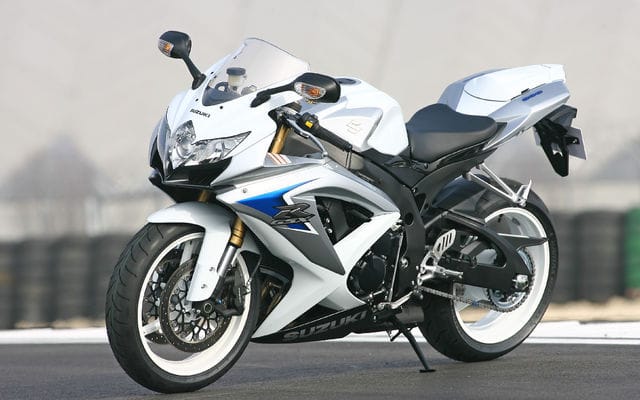 Ambient temperatures barely break into the teens Celsius, it’s foggy and I’m running a fever; I’ve been fighting a bad cold since leaving home for this press launch. We’ve just exited a pre-ride briefing in which Suzuki’s test rider advises us that the “circuit is totally slippery.”

Feeling under the weather, in bad weather, I’m relieved to be on familiar ground, though it’s not the Misano World Circuit in Italy that’s recognizable, as I’ve never ridden it before; it’s the 2008 GSX-R600. With my physical strength and mental capacity sapped, and with little reserve energy available, it helps that I feel immediately comfortable on the latest middleweight Gixxer.

Breaking from the class norm, Suzuki chose to make subtle revisions to the existing model, introduced two years ago, instead of completely redesigning it. A simple revision could mean a nail in the coffin for a model in the ever advancing middleweight supersport class, but not so with the GSX-R600. Sometimes it’s wiser to leave an existing design alone, especially if it works well, and the previous generation GSX-R worked very well.

Although the new GSX-R600 looks very different with its spread-eagle headlights and redesigned air intake scoops, under the bodywork lies the same chassis as the 2007 model, with steering geometry of 23.5 degrees rake, 97 mm trail and 1,400 mm (55.1 in.) wheelbase. The biggest changes to the chassis are slightly firmer settings in the 41 mm inverted Showa fork and rear shock, which retains two-way compression damping adjustment.

Seating position with adjustable footpegs is unchanged. Handling is as it was on the previous model: secure and immediately familiar. Within only a few turns, you feel as if you’ve been riding the Suzuki for the better part of the season. Bridgestone BT 016 radials are new for the GSX-R and provide ample grip despite the cold and damp track conditions.

Engine refinements emphasize low to midrange power, something that has always been a GSX R strong point, while retaining top-end power. Compression ratio is bumped slightly to 12.8:1 from 12.5 through a redesigned combustion chamber, vent holes between cylinders are opened up to 41 mm from 39, twin eight-hole injectors replace four-hole items and spray into redesigned intake ports, while new intake cam profiles have reduced lift, now 8.2â¯mm from 8.6â¯mm. Exhaust head pipe diameter is reduced to 35 mm from 38.1 and exhaust volume is increased, easily visible by the larger muffler.

What these changes equate to is a very subtle increase in torque from about 6,000 to 15,000â¯rpm on the tachometer. There’s quite a broad spread of useable torque available, especially for a 600 class machine. Power comes on smoothly out of Misano’s tighter turns, and it is confidence inspiring to be able to open the throttle wide with considerable acceleration at corner exit, something that’s not possible on an open-classer.

A new addition to the GSX-R600 is S DMS power mode selection. Although highly useful on the GSX-R1000, subduing its monstrous output to manageable levels if a rider so desires, it seems redundant on the 600, especially since the GSX-R600 has such a manageable powerband to begin with. Unlike the 1000, which has a middle curve that smoothes power delivery at lower rpm while retaining full power at higher revs, the 600’s S-DMS reduces power throughout the rev range in both of its softer curves.

In B mode, power is softened to a level equivalent to a 600 cc middleweight a couple of generations old, and in C mode, the Gixxer feels more like its twin-cylinder SV650 cousin.

Although most riders will leave the 600 in A mode, the softer power modes will be highly beneficial to advanced riding schools, some of which rely on added adjustable rev limiters to limit output for beginning riders.

Manufacturers try different things to improve braking, all making claims of improved heat dissipation and lighter weight. Some choose to reduce the amount of mounting pins while increasing disc thickness; Suzuki does theâ¯â¯opposite for 2008, increasing the mounting pins to 12 from eight, while reducing front disc thickness by 0.5â¯mm to 5.0â¯mm.

Brake feel at the lever is soft initially, but braking power is strong and fade free, and is enhanced by a revised slipper clutch. Shifting the six-speed gearbox (we never get it in sixth at Misano) is typically Suzuki slick: a light touch at the shift lever with a slight throttle-chop and without the clutch provides solid upshifts.

The $11,999 GSX-R600 is available in three colour schemes: blue/white, silver/yellow, and the model I find particularly attractive, white/silver with white wheels. Perhaps this mild revision is an indication that Suzuki has reached the pinnacle of GSX-R development and has nothing else to offer. Or maybe the design was good enough two years ago that subtle changes meant to emphasize the machine’s assets were all that were needed.

I’m more likely to believe the latter, for after riding it I can’t see how much better it can get.