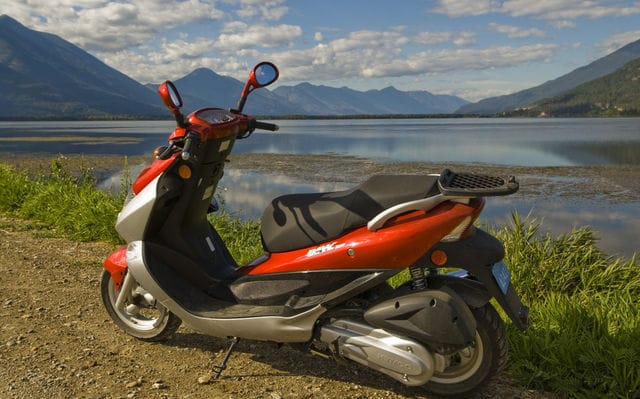 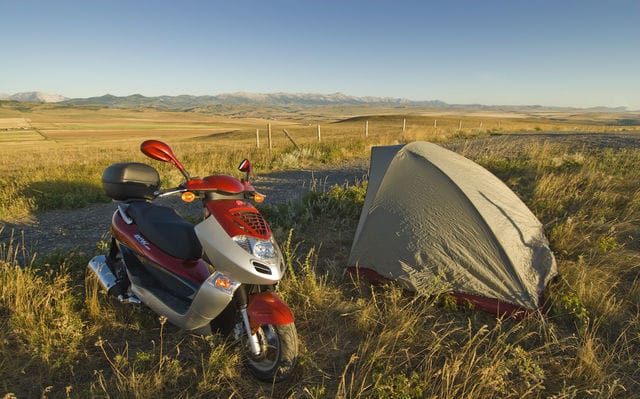 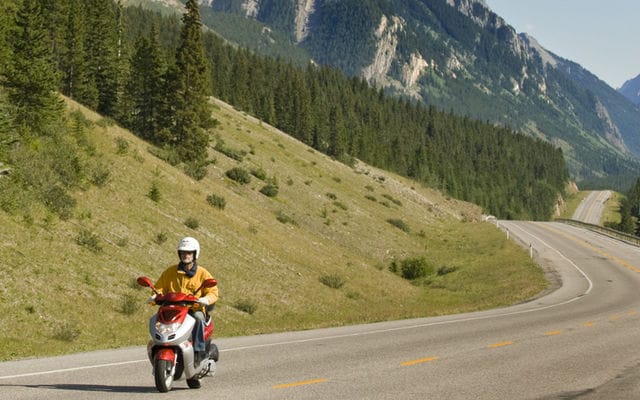 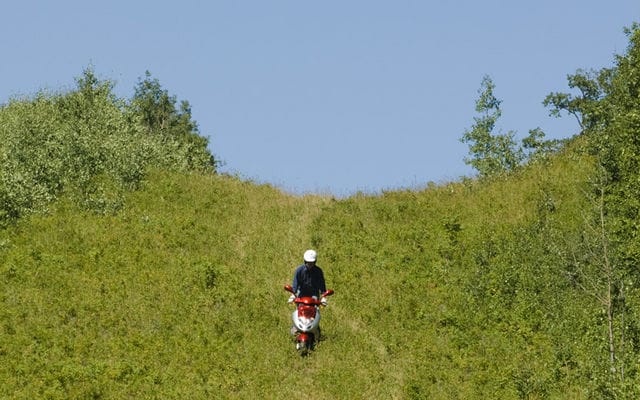 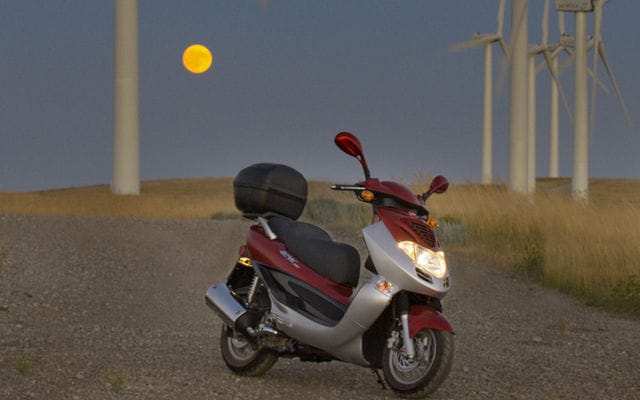 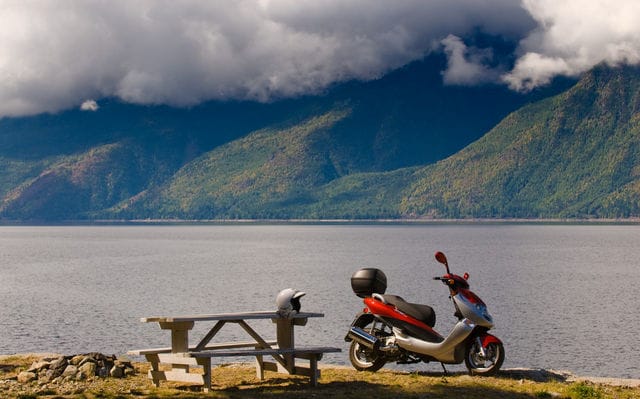 There is no doubt about it—the scooter is moving in. Europe is awash in them and Canadian scooter sales are strong. But are they an urban-only phenomenon or should I clear garage space for a scooter alongside my motorcycle?

Previous experience with a Suzuki Burgman 650 and a Honda Ruckus proved that scooters can be fun and practical, but those were compromising machines. While capable, the Burger was big and expensive and the 50 cc Ruckus was fun, but too slow for highway use.

This time around I chose a mid-sized Kymco Bet & Win 250. Kymco, or Kwang Yang Motor Company, partnered with Honda in the 1960s, manufacturing motorcycle components in Taiwan for the Japanese conglomerate. It subsequently expanded its product line to include motorcycles, scooters and other vehicles, and now exports worldwide. Kymco’s manufacturing experience with Honda is reflected in its current products, which are superbly finished and indistinguishable in quality from the Japanese brands.

The Bet & Win 250 (you’ve got to wonder who names these things, although the prominent BW on the body panels looks dubiously similar to that on a popular Yamaha scooter) combines the comfort, convenience and easy operation of a scooter with the performance of a small motorcycle.

A modern, liquid-cooled, 250 cc four-stroke single provides good off-the-line performance, easily keeping up with most four-wheeled city traffic. Acceleration up to 80 km/h is brisk, and it’s capable of merging with highway traffic. A quarter-litre has enough performance for commuting, errand running and joy riding, but I wanted to tour, carry luggage and assess all-weather performance.

Easy to carry to distant locations because of its small size, I loaded the Kymco into the back of my Astro minivan and, accompanied by my old friend Gord on his motorcycle, ventured eastwards from the Kootenays of BC into the wilds of Alberta.

Our destination is termed by the Alberta travel industry as “Cowboy Country”; the -narrow strip of land bounded on the west by Rocky Mountains and on the east by prairies. Rolling grasslands and traffic-free roads give some of the best motorcycling in the West.

Following margaritas, fried chicken and Doritos for dinner by a wind-power farm just east of the Crowsnest Pass, we moved north to Longview for the night. This little town has fuel, restaurants and, most importantly, access to Alberta’s Highway 40. The Kananaskis Highway is a gorgeous piece of asphalt—one of the most scenic in the country—that slips between the easternmost ranges of the Rockies, runs west then north from Longview, and finally meets the Trans Canada Highway east of Canmore, nearly 200 kilometres away.

After securing a grassy campsite on a gas pipeline right-of-way near Longview, we departed on a nearly 400 km daylong run, surrounded by the Rocky Mountains. It’s a high-speed (for a scooter), open-throttle road, and the Kananaskis Highway is a favourite weekend ride for enthusiasts from Calgary. On this summer Sunday a tsunami of Harleys roared past us throughout the day.

Strong, turbulent winds accompanied us, and more than once I was surprised by sudden unexpected blasts. Whatever you ride, wind is a nuisance, but on a scooter at high speed it can be downright scary. Riding behind me, Gord said that he’d never seen a two-wheeler leaned over so far while going straight. Slowing to below legal speeds mostly resolved the stability issues, but light, small-wheeled, fully faired scooters are extremely susceptible to strong winds.

Reaching the Trans Canada soon after a picnic lunch on the shores of a crystalline lake, we headed west in search of fuel. The sparse, lethargic tourist traffic was suddenly replaced by the harsh reality of the Industrial West. In addition to the tripling of traffic volume, we now had a steady 30 km/h headwind. The Kymco could barely maintain 80 km/h with the throttle wide open, as tractor-trailers thundered past, inches from my left hand mirror.

Once fuelled up at Deadman Flats, however, the return journey eastward was sweet revenge. The scooter’s speedometer indicated 135 km/h as a tailwind pushed us along like the leaves of October. In a straight line with no crosswinds, the Kymco is totally stable, as secure as any lightweight motorcycle, and motorists were surprised when I ripped by in the passing lane.

As the afternoon wore on and as traffic receded, we cruised homeward at a steady 110 km/h, near the top end of the Kymco’s calm weather capability. So precise is the Bet & Win’s steering that I consistently placed its small wheels on the four-inch-wide steel strips crossing cattle grids along the Kananaskis.

As a touring motorcycle, the Bet & Win 250 is not a perfect choice, but for daylong excursions on secondary roads it’s completely at home. Lacking a windscreen, there’s no wind protection for the torso, but legs are well shrouded. But the Kymco feels like any other small motorcycle on the highway. The seat, while relatively narrow and firm, was adequate for long rides, and judging by Gord’s snivelling, his bum was at least as sore as mine at day’s end. Only limited luggage capacity—and rider dedication—prohibits cross-country travel on a 250 scooter. I recently read of a father and daughter who rode scooters similar to my Kymco round-trip from Southern California to Alaska via Albuquerque, New Mexico.

A frequent concern about scooters is tiny fuel tank capacity. Ten litres is simply inadequate for touring, as I discovered on the 180 km homeward leg, when I rolled into Longview with the low fuel light desperately blinking its warning—and I was also disappointed with its mileage. Gord’s bike, an early ’90s Suzuki GS500 twin, used 6.5 litres on the 180 km final leg, while the Kymco used more than 8 litres.

To go swiftly or hastily; to dart; to depart suddenly is how the dictionary defines the verb scoot. 50 cc scooters don’t really scoot at all, and for a seasoned motorcyclist looking for a convenient alternative, they just don’t cut it. Entry-level motorcycles have more to offer. My daily ride, a 1977 Honda CB125S, is fun, cheap to run and as reliable as an anvil, but it’s 30 years old; a modern 125 cc scooter provides far better performance. Double that displacement to 250 cc and you approach real motorcycle performance. But there are shortcomings, like skittish handling from the Bet & Win’s small-diameter 12 inch wheels, a longish wheelbase (1,435 mm/56.5 in.) and a rearward weight bias.

While testing the outer limits of scooter cornering on familiar curvy roads near home, I washed out the front wheel, which then regained traction as I nearly high-sided into a ditch.

Although the Bet & Win has a fuel gauge, its instruments lack a trip meter. I don’t like to rely on the accuracy (or lack thereof) of a fuel gauge alone to tell me how much fuel remains; when it comes to calculating fuel stops in deserted areas, you can’t always bet and win. Its speedometer was optimistic, indicating 100 km/h when actual speed was just below 90. An LCD bar graph tachometer is unreadable, as is the coolant temperature display, but there is a handy, and legible, air temperature gauge.

Storage capacity is fine for around town and the underseat compartment has a convenient light. It accommodates a helmet, light jacket or rain gear, and a few tools, but its complex shape limits stored items to small, flexible objects. An accessory Givi top box mounted on the rear rack, with a 5 kg limit, was an abomination. You couldn’t latch the lid shut without locking it with the key, something I discovered after the lid popped open and hit me in the back on the highway.

Maybe it’s the appeal of new technology, the ever increasing price of fuel or my advancing years, but I find this new breed of middleweight scooter irresistible. Although I don’t commute to work, I used the Kymco every day for four months for a multitude of other reasons, and topping that list was having fun.

So, will I make room for a middle-weight scooter in my garage? Yes, I will, but I’ll wait and see if the Kymco People S 250 eventually comes to Canada; its motorcycle sized 16 inch wheels should make the transition from motorcycle to scooter more palatable for this veteran rider.