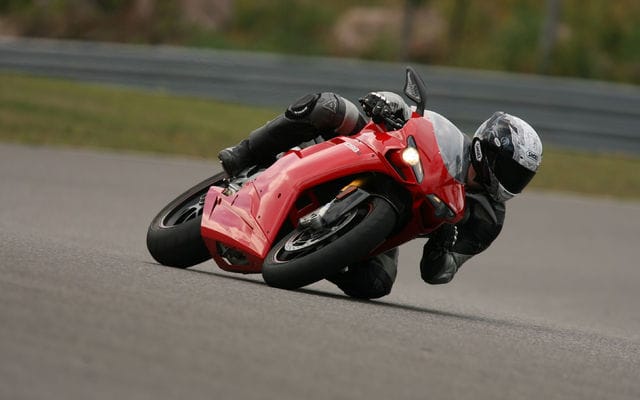 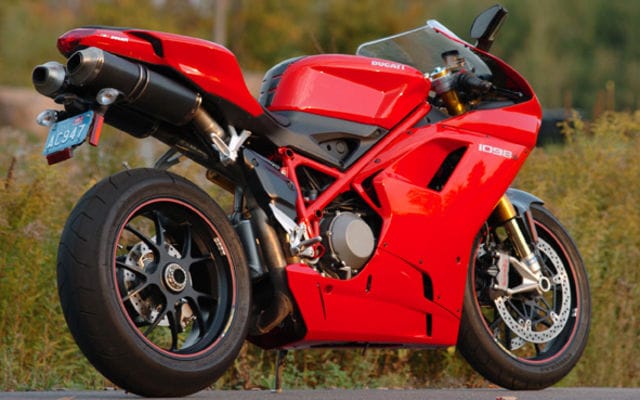 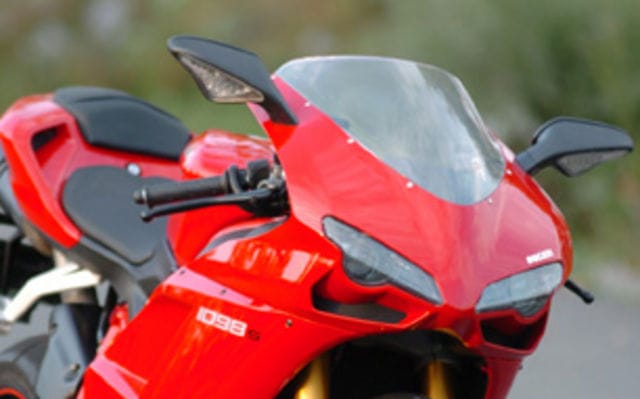 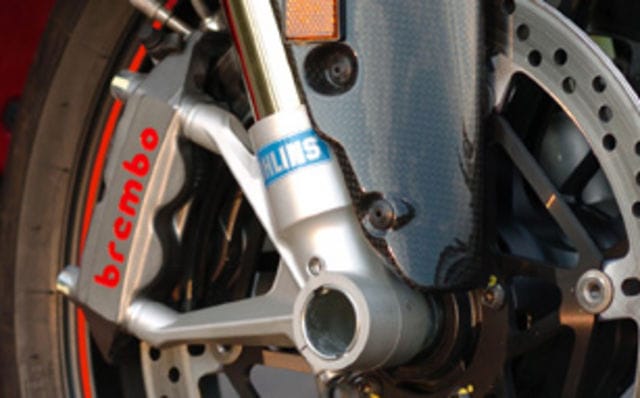 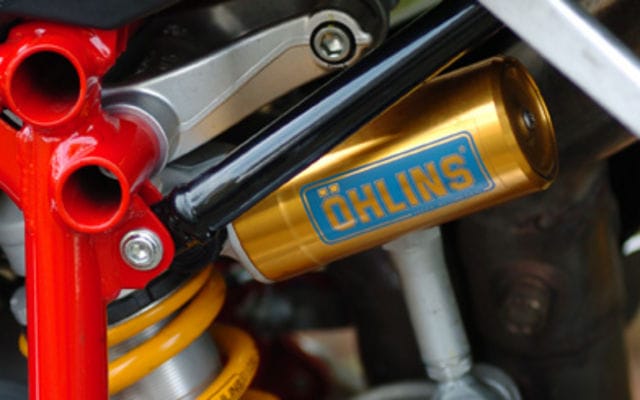 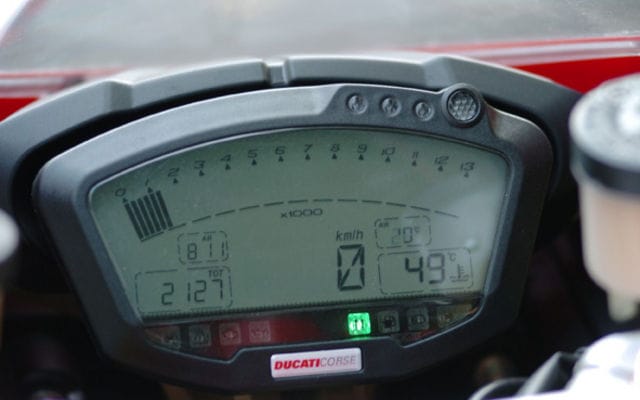 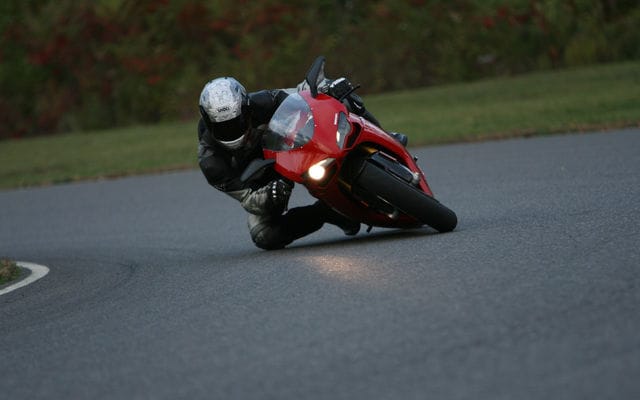 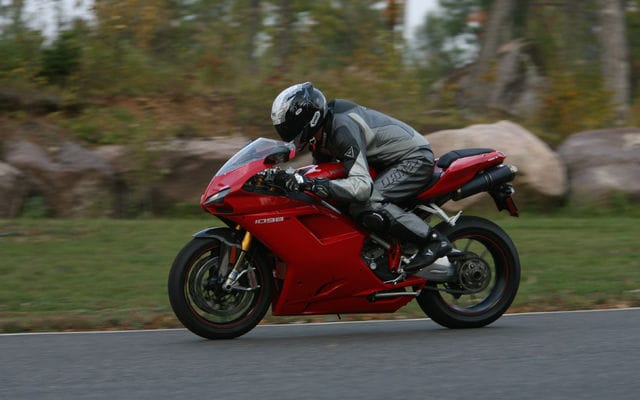 Ducati’s 1098S stirs emotions like no machine before it. Well, that is if you don’t count the original 916.

The standard formula for the progression of sport bikes means a new model is introduced with a little more power, a little less weight and a sticker price a few hundred dollars higher. It is what we’ve come to expect, but no one expected Ducati’s 1098 to cost $19,995, an incredible $5,000 less than the outgoing 999.

On test is the $24,995 S version, a premium that justifies its additional cost by coming standard with Ohlins suspension, lighter Marchesini forged and machined wheels, and a carbon-fibre front fender and tailpiece cooling ducts. Think of the lower price as Ducati’s apology for the 999, an aesthetically daring (some think aesthetically challenged) machine that was never held in the same strata as the 916/996/998 models by Ducati enthusiasts. Beyond it being a new motorcycle, the 1098 is perhaps the most significant corrective measure by a manufacturer in the history of motorcycling.

In late 1993 when the Massimo Tamburini sculpted 916 broke cover, motorcyclists were stunned. Here was a machine that had the performance—if not the outright power—to lead the best of the Japanese brands across the start/finish line. It was fast, slim, beautiful and exotic, and even now, 14 years later, many still consider it the most desirable bike in the history of motorcycling. It was so good that for 10 years, all Ducati had to do was boost performance through additional displacement and healthy sales followed. However, in 2003 when photographs of the Pierre Terblanche designed replacement were leaked, the backlash was unanimous. Terblanche’s creation had so enraged the public, internet forums and letters to magazine editors were full of comments claiming he had destroyed the legacy of the 916 with the slab-sided 999.

Terblanche has admitted that perhaps he was too daring when he drew the 999, but he has also hinted that he thinks posterity will be kind to his motorcycle, which is a sly way of saying that someday public opinion will catch up to him. Arrogant, maybe, but quite likely true, and in 50 years the 999’s shape may be considered timelessly modern, like the architecture of Mies van der Rohe or the unadorned simplicity of a chair by Marcel Breuer. But a motorcycle manufacturer needs to sell in volume, unlike an architect that need only find a patron to finance a vision. Ducati had to think about its present; the future is of little interest if you’re no longer in business. The 1098 is Ducati’s reaction to the pressures of the here-and-now, so while it looks nothing like its predecessor, it has the long legs, the slender waist and the perky rear of the 916.

Specifications show that the handlebar of the 1098S is only a half-inch closer to the rider than the 999, but it is enough to dispense with the sensation that one always had on the 999 of a long stretch across a fuel tank. The riding position is now very compact, but don’t equate it with comfort, as the ass-in-the-air  stance and the resulting forward slope of the seat forces the groin into the fuel tank and loads the wrists, as the body wants to fall forward. Ironically, the flat seat of the 999 was to combat the sloped-seat criticism of the 916; we suspect Mr. Terblanche will feel no sympathy for the discomfort of 1098 pilots. Raising the seat on the 1098S a half-inch above the 999 also allows nearly an inch more legroom without sacrificing cornering clearance. The reconfigured riding position transforms the rider’s interaction with the motorcycle. It is easier to move around, easier to hang off while cornering and allows greater leverage at the handlebar. The last point is particularly interesting, as the 1098S has lighter steering than the 999, despite identical rake at 24.3 degrees (trail measurement was unavailable) and a wheelbase, at 1,430 mm (56.3 in.), a touch longer than the 999’s 1,419 mm (55.9 in.). Perhaps the newfound agility is the result of reduced rotating mass in the engine, as Ducati claims that almost half of the overall 10.5 kg weight loss comes from the engine.

At a recent Pirelli tire test in California, Neil Graham had the opportunity to ride a base model 1098 back-to-back with a Honda CBR600RR, and the differences are illustrative of how a Ducati is different from a Japanese sport bike. The test was at the gnarly Streets of Willow Springs, a Shannonville-like track of poor quality pavement and tight corners. Where the CBR could be flicked corner to corner with ease, the Ducati required that the rider be much more forceful, employing leg and footpeg pressure in addition to more aggressive countersteering. At a tight track like Streets of Willow the 1098 was hard work, but the payback was exceptional feedback from the front wheel. It was possible to sense when traction was at the limit and how tire adhesion was affected by the varying quality of the track surface. The Honda, which is more representative of the Japanese approach to handling, was entirely predictable and stable, but the Ducati’s feedback was beyond compare.

The most obvious mechanical change on the 1098 versus the 999 is the increase in displacement from 998 cc to 1,099 cc, and with it a good boost in horsepower. Ducati claims 160 crankshaft horsepower and 90.4 lb-ft of torque, which seems fairly accurate as the 1098 pulls remarkably hard from about 6,000 rpm to redline, but the 1098 is more than just a bored and stroked 999. Shorter rocker arms allow for smaller external dimensions on the cylinder heads, and a narrower included valve angle allows for straighter inlet tracts. Intake valves are 2 mm larger at 42 mm, exhaust valves are up 1 mm to 33 mm, and elliptically shaped throttle bodies grow to 60 mm from 54 mm.

Gearing, as on most late-model Ducatis, is very tall. The engine lugs below 120 km/h in top gear, causing the machine to shudder. The 1098 retains the dry clutch and its characteristic clatter, and lever effort is both moderate and progressive, while the six-speed gearbox shifts with barely a nudge on the short-throw lever.

At a Pro 6 Cycle (pro6cycle.com) track day at Calabogie Motorsports Park, the 1098S has straightaway speed comparable to a Japanese litre-class supersport, but it trumps the 1,000 cc fours in ease of putting that power to the pavement as delivery is so linear that the throttle can be rolled on with little fear of spinning the tire. Although it feels slower than its Asian competitors, a look down at the digital speedometer suggests the opposite; the machine is deceptively quick. The uselessness of the tachometer’s dimly lit digital bar readout is somewhat alleviated by the clearly visible shift light. Another sore point is the mirrors that would offer a clear view of your elbows if they didn’t shake so profusely.

There is little question of the brakes efficiency; they are stunningly powerful, too powerful, in fact, for a 1098 owner we encountered who had brought his bike to a shop to see if the brakes could be made less ferocious. As is to be expected on a flagship sport bike, the 1098S wears the latest Brembo Monobloc four-pad four-piston calipers, which are now cast in one piece to gain rigidity over the earlier two-piece models. Rotors are up 10 mm in diameter to 330 mm and thickness is up slightly to 5 mm. We experimented with the adjustable front brake lever to find a sweet spot that lessened mechanical advantage so that we wouldn’t pull too strongly, and that’s with only two fingers gingerly poised above the lever. Strength does not come at the expense of feedback, but the front brakes do require a very delicate touch.

The sum total of the changes bestowed upon the 1098 make for a model that will probably draw more enthusiasts of Japanese brands to Ducati than any previous model. Ducati, in coming up with its new price structure, is said to have turned to automotive  brands like BMW and Porsche, studying the premium they charge over more common cars with the goal to have a price point low enough to be palatable to an enthusiast with an eye on a big-bore Japanese supersport. This might not work with the 1098S which extracts a premium price that puts it slightly out of reach.

To say I was smitten by the Ducati 1098S would be an understatement. After all, no other bike radiates sex appeal and lustful performance the way it does. I was quickly brought back to Earth, however, after a short highway jaunt, as my wrists got sore and my frustration with the useless mirrors grew. I would hasten to guess there are some iron maidens that are more comfortable. The part of my brain that wasn’t screaming in protest drifted to pleasant thoughts of mating that smooth and powerful engine, the killer brakes and razor-sharp handling into a modern ST4. What do you say Ducati?
—Michel Garneau

I have always wanted to like Ducati’s superbikes, and now, with the 1098, I do. Making it hustle around a track still requires a firm push on the handlebar, but it is not nearly as ponderous as the 999, and the compact riding position makes for a much more inviting cockpit. The engine, too, astounds, with very nearly the horsepower of a Japanese 1000 but with greater ease in putting the power to the pavement.

It’s a very pretty bike, made all the more appealing by the big drop in price, but ultimately I find the styling a disappointment. It seems un-Italian for Ducati to have scampered back to a previous model for inspiration. Just because most thought the 999 ugly was no reason to reprise a single-sided swingarm and under seat exhaust—that’s just so mid-90s, isn’t it?
—Neil Graham

I’ve never felt as unfulfilled after riding a bike as I did after stepping off the 1098S, yet my chagrin didn’t stem from the fact that the bike was unaccommodating as a street bike. Riding it was painful on the wrists and back, but I could have forgiven those  shortcomings had I the opportunity to sample the machine’s true performance in a more accommodating setting than the streets of Montreal. Scheduling conflicts kept me from attending a track day, where I could have shared with Neil the daunting task of lapping Calabogie on the 1098S, and therefore forging my love affair with the Italian superbike.

Riding this bike only on the street is like having a crush on a cutie who likes you only as a friend—eventually you lose interest and move on. If you really want to get the most out of your relationship with the 1098S, you’ve got to consummate the union with a romp around a racetrack.
—Costa Mouzouris