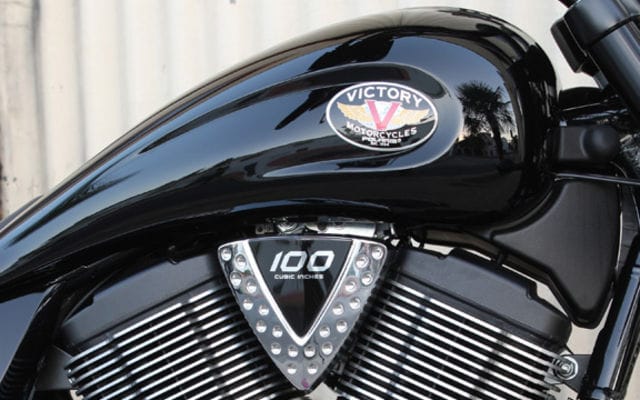 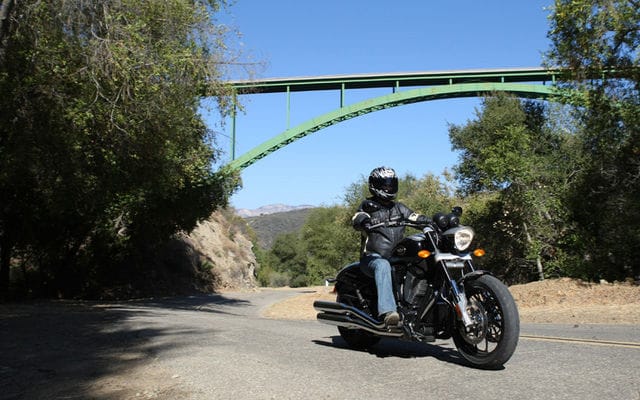 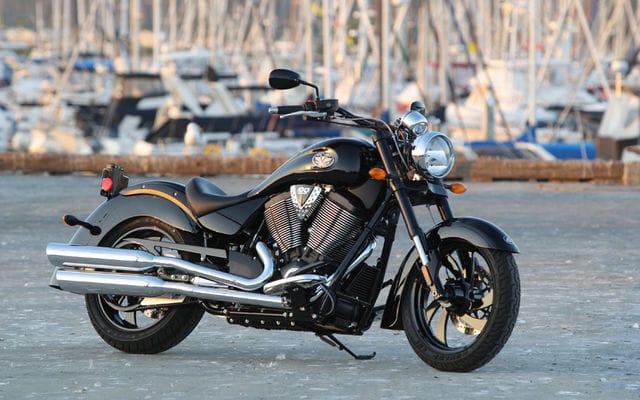 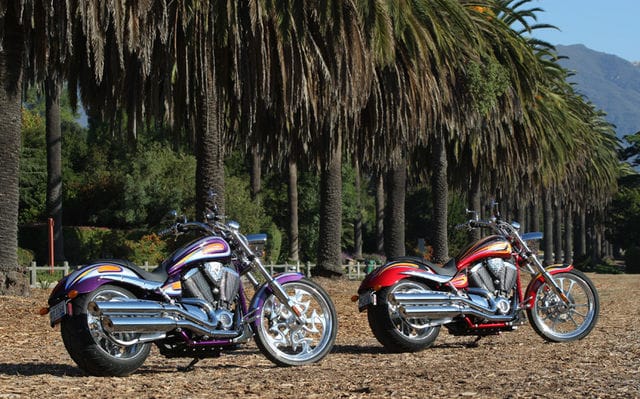 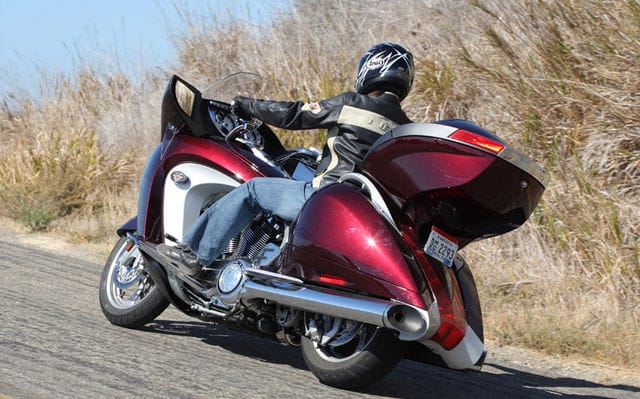 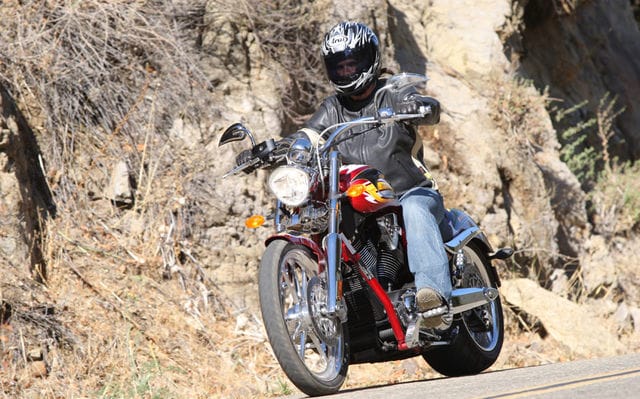 Santa Barbara, California, called the American Riviera due to its picturesque landscape and mild climate, hosts the 2008 Victory launch, and the self-proclaimed New American Motorcycle Company continues its forward march.

Victory’s earlier efforts, notably the V92C models, handled with the precision of a tiller, shifted gears with the finesse of a wood chipper and were stylistically challenged. Victory management wisely identified the machines’ shortcomings and in 2000 hired Mark Blackwell. Blackwell, a former AMA 500 cc motocross champion and AMA Hall of Fame inductee, managed Suzuki’s motocross team in the late 1970s and early 1980s, was VP of marketing at Husqvarna, and nurtured Arctic Cat’s ATV division before becoming general manager at Victory. He quickly set about making changes to improve Victory’s market share, with the introduction of the Vegas in 2003 his first notable contribution to turning Victory around. That was followed by release of the Kingpin a year later.

My day begins with a trip north into the Santa Ynez Mountains aboard Victory’s flagship tourer, the $22,299 Vision Tour. This king-sized land vessel is the pride and joy of the attending engineers and marketing people. A low 673 mm (26.5 in.) seat height makes handling the imposing craft at low speed easier, and the well-padded seat immediately feels supportive and comfortable. The hydraulic clutch has a light pull and the gears engage easily with a subdued yet noticeable clunk.

Once underway, I immediately notice wind noise and buffeting. A quick flick of a handlebar-mounted switch raises the electrically controlled windshield and I’m soon enveloped in a pocket of calm, allowing me to fully appreciate the big V-twin’s pleasantly deep offbeat exhaust note. Easy-to-read analogue gauges and self-cancelling turn signals are convenient, but controls for the various accessories favour larger hands. Mirrors are well positioned, providing a good a rear view.

Engine cooling is improved through a new and repositioned oil cooler, as well as altered internal oil routing including the addition of a new oil gallery in the exhaust bridge area. New camshafts, primary drive, split clutch gear, crankcases and engine covers help reduce engine vibration and noise, and a revised transmission uses a lower first gear and a taller sixth gear. Other upgrades include new brakes on all models except the Vision, with new front and rear calipers, rotors, lines and rear master cylinder.

The Vision uses the larger 106 cu. in. engine and response is well mannered, though I find performance below 2,000 rpm to be a bit sluggish, likely a result of the eccentric throttle cam, which is designed to smooth throttle response at lower rpm, and the machine’s substantial 385 kg (849 lb) claimed dry weight. Fortunately, things get more predictable and immediate once up to cruising speed as sufficient roll-on acceleration is available in top gear, with additional thrust just a quick downshift away. An overdrive sixth gear allows 100 km/h cruising with the engine loping along at a relaxed 2,400 rpm. Engine vibration is well controlled with only low-frequency pulsing making its way through the handlebar and rubber-mounted floorboards.

Handling proves surprisingly responsive for such a large motorcycle and the Vision turns in willingly with a neutral feel. The linked brakes (the rear brake pedal operates one piston in each front caliper) use three 300 mm discs, with a pair of three-piston calipers up front and a two-piston caliper in the rear. The brakes work well, though front brake lever effort is a bit high if it is used alone. ABS is not yet available.

The introduction of the futuristic Vision set the stage for a year of refinement in Victory’s product line. The Freedom 100 and 106 cu. in. (1,634 and 1,731 cc) air-and-oil cooled V-twins are updated with new engine management to reduce emissions and fuel consumption while improving driveability and power. A new closed-loop fuel injection system includes a revised ECU, with new fuel injectors, throttle body, oxygen sensors and idle air control. Each cylinder has separate fuel-injection mapping to improve driveability, and a new air cleaner is fitted for improved airflow. The 100 cu. in. V-twin has its compression ratio reduced to 8.7:1 from 9.8:1 for better knock resistance, while permitting increased ignition advance at low rpm for improved low-end power and sharper response. The Freedom 100 engine produces 85 hp and 106 lb-ft of torque, while the Freedom 106 raises that to 92 hp and 109 lb-ft.

I’m left with a positive impression as I step off the Vision towards an awaiting Kingpin. However, I confess that after coming off the Vision, the Kingpin, at 75 kg lighter, feels like a sport bike. The Freedom 100/6 engine seems raw and alive in comparison, both in terms of response and vibration, and it accentuates the riding experience. The smaller V-twin also has noticeably less compression braking than its larger stable mate.

The upright riding position proves comfortable for battling the wind and the seat is comfortable, though I suspect its thin foam padding would become problematic on longer rides. The floorboards are well positioned and relatively vibration free, as are the mirrors, which remain clear.

Suspension action is compliant without being pillowy soft. Bumps are readily absorbed and the bike handles corners gracefully, gliding effortlessly over the serpentine roads lining the vineyards of Santa Barbara County. A later discussion with Victory personnel reveals that the Kingpin is a favourite of theirs because of its surefooted handling, a trait they attribute to its 18-inch wheels.

Styling touches are impressive and I particularly like the hidden fasteners used on the handlebar clamps and the positioning and integration of the warning lights into the upper tripleclamp, though the use of Phillips screws to secure its trim plate detracts somewhat from the refined look.

Next up is the Ness Signature Series Jackpot ($26,425). Initially a striking sight due to its custom paint and assortment of special bits and pieces, my enthusiasm for this mobile work of art is curbed after a short time in the saddle. Metal handgrips and solid footpegs, although stylish to those inclined to appreciate such things, transmit excessive vibration, and handlebar reach is longer than ideal for my five-foot-eight frame. Although those items don’t do much to enhance my riding experience, what really puts me off is the bike’s high-effort steering and stubborn handling, a product of its wide, low-profile 250/40 rear tire. While impressive to look at, the fat Dunlop causes the bike to resist turning, making it stand up in corners. This is particularly annoying at low-speeds, like when pulling away from a stoplight into a turn. In other words, the Ness Jackpot is a true boulevard cruiser, designed more to please the eye than to stir the soul.

The Hammer S ($22,150) is the final model I sample and after stepping off the Ness Jackpot, the sight of the Hammer’s fat rear tire makes me leery before I even press the starter button. As it turns out, the Hammer S surprises, as its handling proves to be reassuringly competent. It leans into corners without needing constant correction and handles the long sweeping turns leading back to Santa Barbara with confidence-inspiring agility courtesy of its solid chassis and well-calibrated suspension. Braking action is excellent as feel and power from the dual front discs is strong and predictable. The upright riding position, removable seat cowl, multi-spoke cast wheels and sinister-looking black out treatment give the bike a sporty overtone.

On the downside, the starter on the unit I test is noisier than usual, effort from the cable-operated clutch is higher than on the hydraulic units used elsewhere in the lineup, and a slight amount of driveline lash is detectible when rolling off the throttle. These minor items do not, however, detract from what is an otherwise well-sorted and attractive power cruiser. Several trim levels are available in each model line, including the no-frills Vegas and Kingpin 8-Ball models ($15,162 and $15,562 respectively), which are the only bikes still using the firm’s older five-speed transmission; other models use a six speed.

As Victory slowly expands its model line and dealer network, it’s likely to increase its North American market share in the large-displacement cruiser category; you just know the Old American Motorcycle Company will be watching.