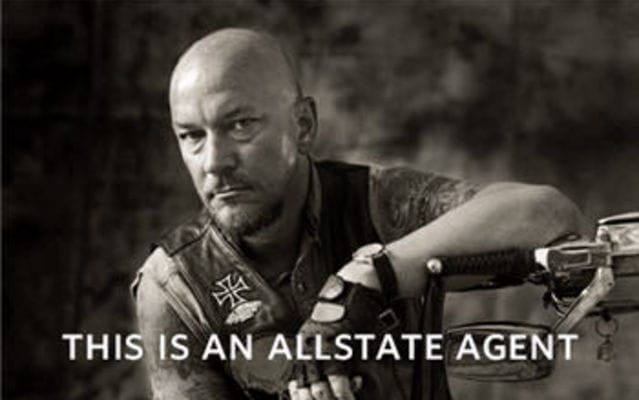 In a press release entitled “Who’s Behind the Helmet”, Allstate Insurance revealed the results of their survey targeting 500 male motorcycle owners over the age of 18, with a household income greater than US$50,000.

And just to make sure people would be interested in reading it, the tagline declared “hardcore riders more willing to curb spouse/significant other before motorcycle”.

According to the answers received from the anonymous respondents, the majority of them would not only give up their wives, but were twice as likely to give up their televisions before their motorcycles.

“Similar to car enthusiasts, millions of Americans invest significant time, energy and money to
celebrate their love of motorcycles,” said Jeff Deigl, an assistant vice president at Allstate. “It’s important to constantly update our understanding of who’s out there riding and what’s important to them. After all, we don’t just protect the bike – we protect the rider, as well.”

Most importantly, you’ll need to be protecting them from their wives when they read this.

Those participating in the survey were also asked to categorize their riding by creative rather than objective classifications, and had to choose from being a Sports Bike Enthusiast, Stressed Out Executive, Hardcore Biker or Weekend Warrior.

Turns out that weekend warriors formed the majority with a 31 percent association rate.

When it came to identifying the make of their motorcycles, it was surprising to find that it was only two brands that represented the choice of 66 percent of all those surveyed. Harley-Davidson edged Honda with 35 percent, and also had the highest average spent on the bike at US$20,600.

Of course Allstate was interested in more than where motorcycles placed on a list of priorities, and asked questions meant to identify the reason they own them in the first place. 78 percent of riders simply stated that “riding is more fun”, but other popular replies included “fuel economy, the feeling of freedom, the way it makes them feel and to relieve stress”. It’s interesting that their wives apparently didn’t factor into the last two replies.

Perhaps the most telling result from the Allstate survey came in the answers given to what song made the best cruising music. Not surprisingly Celine Dion didn’t break into the top five that were:

95th FIM ISDE: The Final Motocross will now be in Cassano Spinola, and also on live TV

DAB Motors presents the CONCEPT-E, its vision of future mobility

Adventures in motorcycling – Taking off on 2 wheels