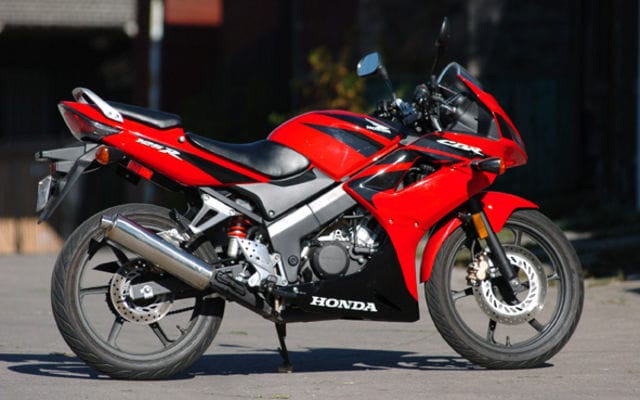 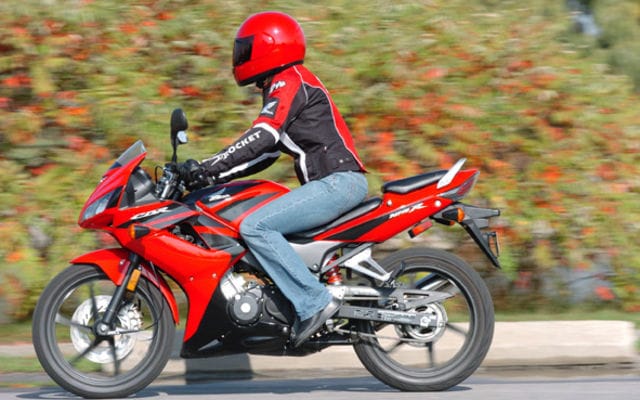 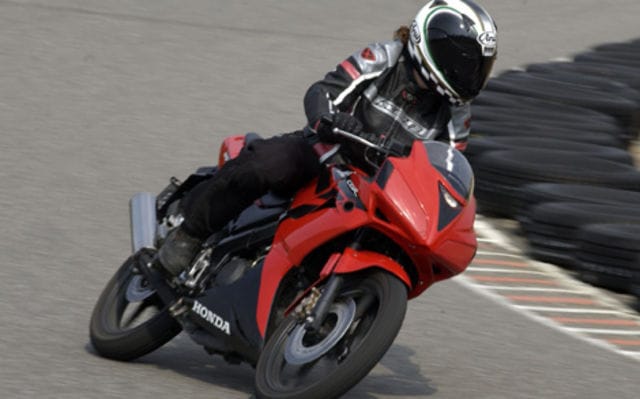 A Motorcycle Of My Own

“I think I’ve figured out a way to get you on a bike,” says Neil, arriving home from the office to a kitchen in chaos. But with a toddler hanging from my belt loops and boiling pasta long overdue to be drained his words scarcely register. Later that evening I learn that Honda Canada is releasing the CBR125R, and if I am willing I can learn to ride for the small price of telling my story in Cycle Canada.

A few summers ago, at my uncle’s cottage, I spotted a 1970s Honda CB125 in an overstuffed barn. I’d always liked the idea of riding, but many of the motorcycles Neil brings home either have seat heights too tall for my five-foot-three body or are too heavy for my 105 lb to handle. But the vintage CB125 was a manageable scale, and an afternoon of wobbling around my uncle’s yard with a goofy grin convinced me that if only I could find the right bike I’d take the step. The CBR125R is my chance.

I’m a Capricorn, and if you’ve never lived with one, be thankful. Capricorn decision-making is just shy of torture and we’re almost never satisfied with the choices we finally make. We frustrate easily and are deeply ashamed if we’re not instant naturals. Having taught me to drive a standard-shift car a few years earlier, Neil is only too happy to hand me over to professional riding instructors.

Early on an April morning, on Toronto’s desolate industrial waterfront, I wave goodbye to Neil and our daughter Cass, who are off to spend a day at the zoo. I am envious of them—spending time with gorillas and giraffes guided so elegantly by instinct. I feel far from my instincts, teeth comically chattering and boxy riding gear clumsily puffing me up, and join a cast of first-timers desperate to pass the course.

Another Capricorn trait is our need for constant approval. During the course I vie for raised eyebrows and nods from instructors every time I clear a pylon. But eyebrows are instead raised in exclamation as instructors’ quickstep to avoid me. I am repeatedly encouraged to look where I want to go, but I can’t seem to make the motorcycle go where I’m looking.

I begin the course on a cruiser, but am quickly turned off by its uncomfortable riding position, and as a mountain biker feel poorly balanced with my feet shoved so far ahead. Mounting the Brazilian-made, standard-style Honda 125 Titan, I instantly feel more capable. The Titan is well worn and quirky, with a hair-trigger clutch, but eventually its quirks are overcome and it carries me all the way to a passing grade. Then it occurs to me that now I have to manoeuvre on Toronto’s downtown streets. The CBR125R is to arrive in three weeks, and I wish for a delay, but it arrives on time. It looks good, though I’m not keen on the aesthetics of sport bikes and its shiny red paint is a shade too loud.

The CBR125R turns out to be a very forgiving motorcycle, an ideal bike to learn on. Its easy-pull clutch makes it virtually impossible to stall and the brakes, shifting and throttle are so smooth and progressive that it reminds me of an expensive well-engineered bicycle. My feet reach the ground with ease, and it is so light that even when I nearly drop it backing out of the garage I am able to safely bear its weight and hoist it upright. Its manageability allows me to enjoy corners and even speed bumps, and concerns about dropping it disappear.

I read once that the reason cats go mad in a moving car is because they can’t tell that they’re stationary and that it’s the car that’s moving. Cats feel like they’re running at 120 km/h, and so do I during those first rides. I am surprised by how fast 40 km/h feels without the wind and noise protection of a roof and doors. Driving a car it’s a struggle to keep speeds down, but on this bike I’m twisting hard on the throttle to keep from drifting too far under the limit. This impression eventually fades, and my newfound agility and speed make traversing the city faster and more fun than in a car. Zipping around town is finally enjoyable, and with mileage of 2.9 L/100 km (96 mpg) and a range of 300 kilometres from a $10 fill-up, it’s more sensible than lugging around a car. And in Toronto, motorcycles park for free.

On a sunny weekend in September, Neil, Cass and I make our way to my mother’s house in Kitchener. Leaving Cass, we set off for my first ride on country roads, hoping to find a curve in this straight-edged part of the province. Weaving our way toward Elora, Ontario, we meet road construction and three kilometres of slippery, pot-holed and wet-packed dirt. With no easy way to turn back, we crawl along, to the chagrin of drivers stacked behind us. I don’t enjoy these 10 minutes and am relieved when we hit paved roads again, but I appreciate the focus demanded of me to keep eyes up, grip relaxed and the bike upright beneath me.

An appealing part of buying a CBR125R are the Joe Rocket boots, pants, jacket and gloves that are included in Honda’s $149 a month New Rider package, but I find them a mixed blessing. On my frame, only the jacket is usable. The boots are as stiff as downhill ski boots and make shifting difficult; the pants are too bulky and long and the gloves too loose to facilitate easy handling of controls, though aside from the overly rigid boots perhaps these are more issues of sizing. And though I like the jacket for its lightness, removable liner and armoured elbows and shoulders, the giant Honda insignia makes me look more factory road racer than neophyte. Honda is keen to promote the CBR, but must customers be turned into billboards?

Returning the Honda to the Cycle Canada office at the end of the season is surprisingly emotional; I have grown more attached than I realize. So attached that I’ve thought about buying one. My only concern is how long it will be until I outgrow it for want of something larger, but maybe I’m getting ahead of myself. Perhaps learning to ride on the $3,499 CBR125R is akin to the progression through swimming lessons, beginning in the wading pool on the way to the deep end. Viewed as a short-term investment in the development of long-term skills it’s a bargain, especially if it allows you to become a natural, just like me.

FROM THE SADDLE —Roxanne Gallery

Having ridden 250s in the past, I knew I wouldn’t have a hard time getting comfortable on the CBR125R. Although power is not its forte, the CBR is one of the most enjoyable bikes I’ve ridden. I was thrilled when Costa said I could take it to work. It’s light and narrow, it starts instantly (my Kawasaki Zephyr has a choke I’m always fumbling with) and is very easy to ride; it was the highlight of my working days. I feel comfortable on my bike, but I wish it felt more like the little Honda.

I also got the opportunity to ride it on the track when a bunch of friends organized a track day at Mecaglisse. Costa gave me riding tips and led me around for the first few laps to show me the lines, which helped me get comfortable, but the CBR also inspired confidence at the track, and I was soon leaning farther than I ever have on the street. The first time my boot scraped the pavement really freaked me out, but when I got used to it, boy was it fun. I hear Honda is creating a racing class for this bike. I think I have to buy some leathers.