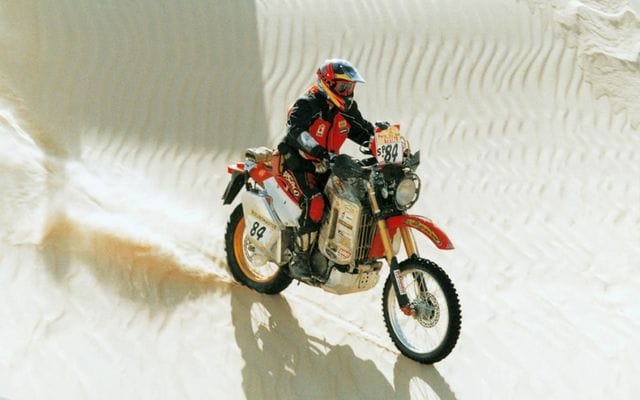 Dakar Rally enthusiasts in southern Ontario will want to mark May 14th on their calendars. Cycle Canada contributor Lawrence Hacking will be making an appearance at an Orangeville bookstore to sign copies of his recently released book, To Dakar and Back.

Published by ECW Press (www.ecwpress.com/books), To Dakar and Back chronicles Lawrence’s exploits during the 2001 running of the infamous rally, an achievement which earned him the title of first Canadian to complete the gruelling event.

Along with signing books, Lawrence will chat about preparing and riding in the Dakar, among the other highlights of his off-road career.

Canada’s “off-road Ambassador” will be very busy this summer; along with helping to save the nearly demised Sportbike Rally in Parry Sound (www.sportbikerally.com), and his work for World Enduro Canada, Lawrence will be riding in this year’s edition of the Paris to Dacre Rally.

Those wishing to meet Lawrence will find him at Booklore, located at 21 First St., Orangeville, between 7:30pm and 8:30pm. For more information you can contact the bookstore directly at 519-942-3830.