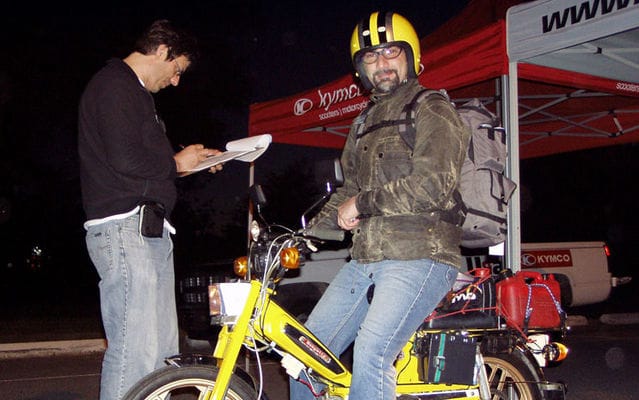 Do your friends think you’ve got a screw loose because you fantasize about riding a 50cc scooter through a picturesque landscape wearing nothing but a pink tutu? Or maybe you’ve imagined yourself to be a modern day Viking, pillaging your way through the countryside on a vintage Vespa?

Granted you’re probably quite insane. However, now isn’t the time to worry because there’s a special event for people like you, the 2009 Mad Bastard Scooter Rally.

Being run between June 19th and 21st 2009, the rally is taking a hiatus in 2008; event organisers Canadian Motorcycle Guide (CMG) claim they need the time to make the 2009 edition of the Rally the biggest and best to date. The rally was last held in 2007, during which Cycle Canada’s very own Costa Mouzouris finished a respectable 14th on a 1970 Motobecane 49 cc moped. What can we say? The man has issues.

For those not familiar with The Mad Bastard Rally, it’s an 800 km endurance ride on a scooter, during which you have to collect as many Mad Points as you can along the way.

Mad Points are awarded for various acts of buffoonery. In the past those acts have included "getting naked on the ferry" and by wearing the most creative costume. Points are also accumulated by retrieving various scavenger hunt type items while riding the course.

Rally entrants are divided into different classes depending on the size of the scooter being used. The class also determines the time in which you have to complete the rally. The smaller the scooter, the more time you are allotted to complete the course.

The easiest group which is called “Day Release”, is for 200 cc or larger scooters and gives you 15 hours to complete the route. “Therapy Required” is for scooters between 100 and 200 cc, and comes with an 18 hour restriction. Need more time? Then you should enter the “Heavily Medicated” class, but you’ll have to do it on a 50 to 100 cc model within 20 hours.

However, for those truly deserving of the title of Mad Bastard, there’s the “Straight Jacket” class. How does an 800 km ride on a 50 cc or less scooter sound to you? At least you’ll have a full 24 hours during which to contemplate your descent into madness.
For more information, and to start your journey towards complete insanity, visit http://www.madbastardrally.com/2009/index.html.

Just don’t tell them we sent you.